Yesterday saw the start of the 2015 Australian Junior Chess Championships, being held at Canberra Grammar in the ACT. With the 'new' format (which has now been running for 5 years), this meant that today was the first day for the under 18 Open, under 16 Open, under 10 Open, under 8 Open & the under 10 & 8 Girls events to begin. The events are spread over two halls & I am an arbiter for the under 10 & under 8 Open sections. Today they played three rounds (and will play 9 rounds in total over three days) & there are four players in the under 10 (out of 52) & three players in the under 8 (out of 24) who finished the day with a perfect 3/3, though being only the first day, there are still plenty of kids in contention for the top prizes.
Although I have been to a number of previous Australian Juniors, either as a player (just the once - I was a late starter), coach or spectator, this is the first where I have been an arbiter & it is a rather hectic job, particularly with the younger age groups. A typical round starts with some brief announcements, such as the time of the next round & reminding parents to turn their phones/tablets off, followed by a quick walk around the hall to make sure that all the games have started & there are no issues with clocks, etc. Of course as often happens with younger kids, a game or two might finish after only a few minutes & then I have to check that the players sign both scoresheets & fill in the results correctly, as well as reset the board & make sure they don't leave anything behind. The procession of games finishing seems to be fairly constant until around the hour mark, when there are usually only a few games left & it is only then that you can really take a seat & be reasonably confident that you can stay there for almost a minute before something else happens. On day 1, there was typically around 30-45 minutes spare between rounds, however I expect this to get shorter as the games get more evenly matched.
There's already some media coverage of the event, while Cathy Rogers has been busy taking photos. 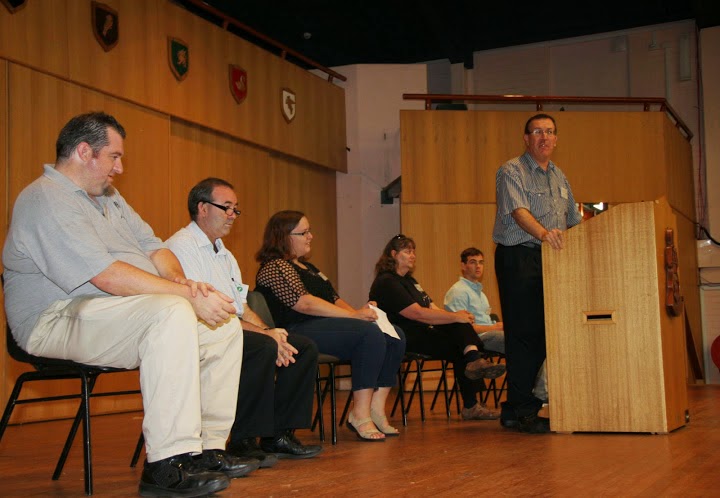 On stage during the opening ceremony 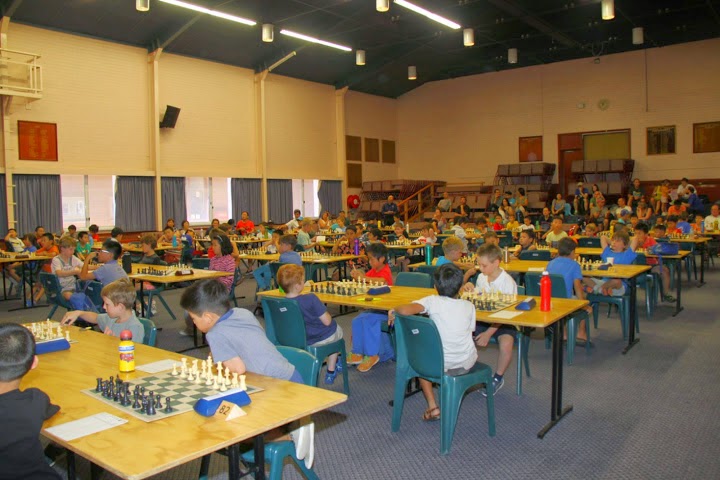 A hall packed full of young chess players, eager to start their games!
Posted by MelbourneGamesCoach at 10:52