Unfortunately one of the characters of Australian Chess, Peter Parr, passed away around a week ago. A thread on ChessChat includes words by many who knew him much better than I did & is well worth a read for anyone interested in Australian chess.
Although I have only known of Peter relatively recently (the last 15-20 years), I thought I would share my thoughts on him and how I saw his contribution to the chess community.
I only came onto the chess scene in the early 1990s, in my final years of high school, so Peter's previous exploits as an arbiter at the Doeberl Cup in Canberra, as well as his shop & chess centre at locations other than Surry Hills & Redfern were before my time in chess. To be honest, I'm not sure exactly when I first met Peter, but presumably it would be when I first walked down the stairs to the basement shop he had in Surry Hills in Sydney sometime in the early to mid 1990s. These early memories are fairly vague, as it would have just been a visit to a shop that happened to sell chess books & products, rather than books or others items in general. The late 1990s was when I really got to know Peter & spent more time at his shop Chess Discount Sales in Surry Hills. This happened as it became a regular meeting place on Thursday nights - I would often meet up with various friends in the chess community, such as Nick Kordahi, Greg Canfell, Eddy Lee, Michael Pandelas, Theos Rippis & many others. On Thursday nights Peter kept his shop open late & for many years there was a regular 'loser off' table of blitz going on when I arrived. Not only was it a great place to meet up with friends, but it was a great opportunity to play against some fantastic players & test one's skills against the likes of Max Fuller, Steve Kerr, Pat Halpin & others who might be at Peter's on a Thursday night.
I also represented Chess Discount Sales in the NSW Grade matches on year in the under 2000 division, in what was essentially a team of friends who happened to meet up at CDS on Thursday to play chess before sometimes heading elsewhere in the city for dinner, a movie, or whatever other form of entertainment took our fancy. Peter was more than happy to leave his shop open later than usual on Thursday nights to allow us to play our home games at his shop. From memory he also paid the entry fee for the team to enter the tournament! This competition turned out to be a great learning experience for me & it turned into a great boost for my rating! Under the competition rules, the board order had players playing mostly in rating order, although there could be up to a 50 point difference between players who could 'swap' boards (ie: player on board 2 could be 49 points LOWER rated than board 3 & this would be fine according to the rules). As it turned out, the vast majority of friends who played in the team were all rated within 50 points of one another, so we came up with a plan to try to maximise the number of points we scored. The plan was to put me on board one (in spite of being the lowest rated in the team) as a 'sacrificial lamb', which would allow the others on boards 2-4 to have a better chance of winning games & as a result, potentially have a better overall result. Of course it turned out that the competition coincided with a purple patch in my own form & I scored around 60% on board 1 against players that were around 300 points higher rated than me & as a result of this & other events I played around that time, my ACF rating skyrocketed from the mid 1600s to the low 1900s!
As for Peter the person, he was always happy to talk about anything chess-related & always seemed to know the latest local chess gossip, as well as what was going on around the world in chess. He was always happy to give a discount on anything I purchased from his shop (and the majority of books in my chess library were purchased from Peter's shop), as the shop name would suggest. He also had a good memory of events in the past, particularly those that he was somehow involved with, whether directly or indirectly. When it came to 'official' duties, he was always quick to remind people of his various awards & titles, of which he was obviously so proud. The main one of these being his Order of Australia medal, which he received in the late 1990s for services to chess. He was also happy to remind people that he was an International Arbiter & often served on a variety of FIDE committees & panels. His regular Monday column in the Sydney Morning Herald was always useful for keeping up with local news, particularly in the days before the internet &he didn't mind including an occasional mention of noteworthy performances from his Thursday regulars in weekend or club events.
Peter will be sorely missed by the chess community, particularly in Sydney, while his dream of once again having a chess centre in the Sydney CBD has yet to eventuate, there is still a possibility that something of this nature might end up happening one day in the future. I am not sure what will happen to his shop & business, but chess in Australia would be a poorer place if it were to disappear.
Below is a photo of Peter receiving his Order of Australia Medal, which comes from the cover of one of the chess magazines he used to produce, Chess in Australia. 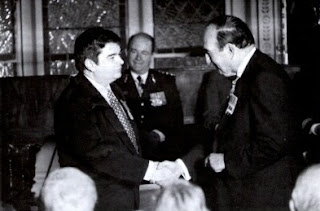 Posted by MelbourneGamesCoach at 03:53 No comments:

Recently the Melbourne Chess Club received a donation of a large number of chess books from the estate of Ray Johnstone, who was quite the collector of chess books! I found a brief profile of him as well as a copy of an obituary online & the chess books in his collection recently found their way to MCC. Ray seems like he was quite an original thinker, who was prepared to back up his ideas in practice, such as taking up smoking in response to a number of scientific papers against smoking which he thought contained significant errors! He was also by all accounts a strong attacking chess player, coming close to winning the Western Australian title on a number of occasions. As there were so many books, MCC offered a number of them for a gold coin donation, with the particularly rare or modern volumes going to the bookshop for sale at a later date. 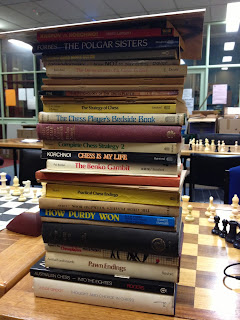 The picture above shows the books I picked up ... quite the collection!
I managed to find quite a number of books of interest, in particular Adriaan de Groot's Thought and Choice in Chess, which in one of the first books that covers thinking patterns in chess, which is something I am interested in & have blogged about in the past. I also found a number of books about local chess & personalities which I picked up, including biographies of CG Watson & WA Whyatt, books on the 1975 Zonal & Australian Open, Ian Rogers' famous Australian Chess into the Eighties about the 1980 Australian Championship & even a short book on the King's Gambit written by Aussie Trevor Hay!
I'm not sure that I'll ever get around to reading all of them, but they will definitely be well looked after as part of my ever-expanding chess library!
Posted by MelbourneGamesCoach at 18:37 No comments: