Although its a little late, Monday's video is finally online, however it is in three parts because it went for a little longer than I'd planned.
The game itself is between William Naff & Kyle Mayhugh from this year's David Mote Memorial tournament in Illinois. Kyle is a regular poster on the 2+2 chess forum (yes, its a poker forum, but there is a chess sub-forum) & the game was discussed between forum members, so it seemed like a good game to use for the first episode of Amateur Game of the Week. It starts out as a fairly tame exchange Ruy Lopez, but Kyle decides to sacrifice a piece for a kingside attack & suddenly the game is anything but tame!
Anyway, on to the videos:
Part 1
Part 2
Part 3
Hope you find them instructive and somewhat entertaining!
Posted by MelbourneGamesCoach at 20:54 1 comment:

Email ThisBlogThis!Share to TwitterShare to FacebookShare to Pinterest
Labels: 2+2, Amateur, Chess, Game of the Week

Today I recorded the first episode of Amateur Game of the Week ... but it went much longer than I had imagined, so the uploading will take a bit longer than I had expected. I am expecting to have the video up (most likely in three parts) sometime tomorrow. Hopefully it will be worth the wait.
In other news, I finished equal thrid in the Malitis Memorial tournament at Melbourne Chess Club. I was somewhat criticised for my decision to accept an early draw offer in the final round, however I was happy enough with the result (a draw against top seed Jesse Jager), and happy to guarantee a share of the prizemoney (I was guaranteed at least equal thrid with a draw). The reason for the criticism was that going into the final round, Jager was on 5.5/6 & myself and two others (playing one another on board 2) were on 4.5/6, meaning if I won that I would finish in equal first on 5.5/7. Some people thought that with the potential of a draw practically always on the table, that I essentially had nothing to lose by playing on. As it turned out, the opening played was very quiet & there was very few obvious ways to make a winning attempt in the position. Ultimately I was happy with the result of the tournament & I'll wear the criticism levelled at me for taking the 'soft' final round draw.
Posted by MelbourneGamesCoach at 07:56 No comments:

So its Friday ... and its time for a video looking at how the pro's do their thing. This time to kick off the series, I take a look at a game by my favourite player, Swedish Grandmaster Jonny Hector. The game in question is from the 2011 Swedish Championship against GM Emanuel Berg, where Hector plays a crushing opening novelty to steamroll his fellow GM. Hopefully you find my analysis an entertaining, if not educational addition to a fascinating game.
In somewhat related news, I'm also looking to put together a short intro (or perhaps series of intros) to the videos, both to identify them as 'Melbourne Games Coach' videos, as well as to try to develop some sort of design style and image in terms of the videos. I have some of my own ideas & I might try to get these together at some time in the near future if at all possible, but I'm more than happy to look at ideas & submissions from readers/viewers.
So ... if you want to try to put together a brief intro that could be used at the start of some of these videos (either a general intro, or an intro for a specific series), you can either post it on YouTube, or email me at melbournegamescoach@hotmail.com keeping in mind that ideally I'd like something in the 20-60 second range.
Posted by MelbourneGamesCoach at 04:31 No comments:

So its a day late, but I did record this on Wednesday ... an 8 game session on PokerStars playing 50c/$1 for limit games & 10/25c for big bet games. The session itself went for around 40-45 minute, which was long enough to get through one complete rotation of the games.
I feel I played OK, although I still have difficulties in some games with blind defense & perhaps play a bit too tight in the big bet games. Also excuse the voice & occasional sneezing in the video - I'm not exactly 100% healthy at the moment. Also on this occasion I've recorded the session & added comments afterwards. This is something that I may continue to do, or I may mix it up with some 'live' commentary if doing these sort of videos in the future.

Your thoughts & comments are welcome, so feel free to add them either in the comments section, or on my YouTube page itself.
Posted by MelbourneGamesCoach at 23:40 No comments:

So I've devised an optimistic schedule for videos that I plan to create (with the caveat that I won't be making videos on days where I am working or have something like a chess tournament on) ... I'll see if I can stick to the schedule.
The plan is to put them on my YouTube site & embed them here ... with the aim of both increasing the audience, as well as providing some entertaining & educational material.

Anyway ... below is the Video Schedule

Monday - Chess - Amateur Game of the Week
This is where I plan to look at games of other people & post some sort of analysis of the game. Yes, this means that you can submit a game that you would like analysed to melbournegamescoach@hotmail.com The other option for finding games to analyse will be from places such as forums at chesschat.org, twoplustwo.com, ozchess.com.au & the like.

Tuesday - Chess - My Game of the Week
This is where I plan to look at one (or more) of my own games. Most likley it will be from a recently played event, such as the regular Monday night events at Melborune Chess Club, but might also include games from weekend events & the like, as well as the occasional 'blast from the past' game.

Wednesday - Poker - Reviewing My Play
This is where I will be looking at different aspects of my own poker play. This could be one of a number of formats, including a live play session, a review of a session, a hand history review, or some other format that I might come up with.

Thursday - Chess - Openings & Endgames
This will be a more theoretical look at different openings & endgames. At times it might also coincide with material presented at the MCC Opening/Endgame group run by Carl Gorka, possibly continuing or expanding on what was discussed on Wednesday night at the group, although it will not necessarily always follow this format.

Friday - Chess/Poker - Reviewing the Pros
This will be a review of chess games or poker hands from professionals, ideally rotating between chess and poker on a weekly basis. The plan is to look at poker hands from TV, from events like the World Series of Poker, Poker After Dark, the PokerStars Big Game & the like, or for the chess weeks to look at master games from recent tournaments, or some of my favourite master games played over the years.

Weekends - Other Games - Games Potpourri
This will be a look at games other than chess and poker & will range from 'how to' guides to strategy tips and the like. Games that will likely be part of this series will include Settlers of Catan, Sudoku, Tertis & Snow Bros, amongst others.

Of course being a Wednesday, I'm aiming to post a poker-related video sometime later today ... so hopefully you'll get a two-post day ... if things go to plan!
Posted by MelbourneGamesCoach at 19:20 No comments:

Time to get blogging!

I've not only come to the realisation ... but have decided to act upon it ... that blogs need to be updated regularly for any sort of regular readership or interest to be generated ... and as such make the blog worth updating ...
Also, given that this blog has a general focus on games & coaching, the PLAN (whether the plan matches reality is another issue) is to try to record & upload one video per day on days where I'm not working as a Casual Relief Teacher in schools. I suppose the true test of the plan will be to see how long I stick to this routine.
The plan is to create videos on some (or all) of the following topics:
* Chess
* Poker
* Other games (Settlers of Catan, Snow Bros, etc)
I suspect most of the videos will be either chess or poker related, but we'll see how things go.

Of course as I'm working tomorrow (Tuesday), the next entry ... and next video ... will be sometime later in the week ... or at least that's the plan!
Posted by MelbourneGamesCoach at 05:04 No comments:

Last weekend I attended a FIDE Arbiter's seminar run by International Arbiters Shaun Press, Gary Bekker & Charles Zworestine. Plenty of information was covered over the four days of the seminar & it finished up with a gruelling 3 hour exam. The pass mark for the exam was 80%, so I was pleased to pass the exam, particularly with only around half of the attendees managed to pass.
One question in particular was a tough one ... and one where I dropped some marks in answering.
The question gave the following position: 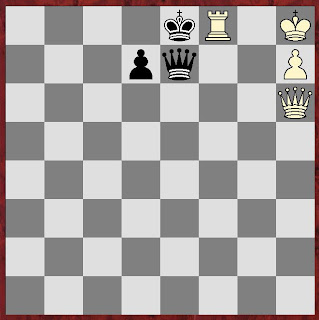 The question stated something along the lines of ... White has just played Rf8+ & their flag has fallen. What is the result of the game & why did you come to this decision? In some ways, the correct answer is counter-intuitive, but in others it makes perfect sense.
Ultimately the game is a draw, as there is a forced stalemate sequence. The only way for black to get out of check is to play Qxf8+ ... likewise, white can only get out of check by playing Qxf8+ ... and black can only get out of this check by playing Kxf8, leaving the white king stalemated.
I answered (incorrectly) that the game should be a win for black, but noted that there was the forced stalemate sequence, so received some marks for the question.
In terms of the logic of the decision, it initially seems odd that you can run out of time, with your opponent having mating material on the board, and still not lose the game. However, when you consider the situation in a 'big picture' view, it makes sense, as the general priority is to decide games on the board, rather than by some 'off-board' technicality, like a clock, or arbiter's decision to declare the game lost. An analogous situation to this would be a game where you play a move that checkmates your opponent, however your flag falls before you can press the clock. In this case, the checkmate stands (not simply from the 'board has priority', but the rule that states that checkmate ends the game immediately, so there is no need to press the clock to complete the move).
The exam itself consisted of 20 multiple choice questions, 12 'short answer' questions & a pairing exercise where you needed to manually pair 3 rounds of a tournament where you were only given the number of players (and ratings) and the round results in board order, as well as any other information (such as one round where a player took a half-point bye). Ultimately it was a very tough exam & I barely managed to finish it in the time limit.
This is the first step (for me at least - some of the participants had fulfilled the other requirements) towards the FIDE Arbiter, with the exam counting as one of the requirements for the title, along with 3 'norms', which can be aquired by running a range of FIDE rated tournaments (1 norm per tournament). To use an analogy, I suppose this will be another string to my bow in terms of chess, in addition to my playing & coaching experience.
Posted by MelbourneGamesCoach at 21:17 No comments: