Today I had a win against ACT junior Joshua Bishop, to put me on 3/4. Joshua played an unusual line of the Trompowsky (allowing 10.Qxb7), which should have been enough to chalk up an early win, but I didn't follow up with 11.Bxc7 & 12.Ba6, which would have won the exchange with a strong position. I overestimated the strength of my passed a-pawn & underestimated the strength of Joshua's counterplay, and particularly the strength of his active king in the middlegame, and only won thanks to Joshua's blunder which allowed me to win a piece & shortly afterwards the game:

Tomorrow I finally have black against a non-junior, Alistair Anderson, however I was next to his round 3 game where he demolished John Dowling, who has a similar opening repetoire to mine.
In the top board clash, Ian Rout emerged victorious in a tactical battle with Tony Davis to take the outright lead on 4/4, which the cream is rising to the top in the Championship, with Zhao & Xie the equal leaders on 3.5/4, with their top board clash being very significant in determining the final standings of the tournament.
Posted by MelbourneGamesCoach at 02:45 No comments:

Today I managed to butcher the opening & was lucky to snatch a draw from improving junior Max Chew Lee. This time my Modern Defense transposed into an Accelerated Dragon & I played d5 before playing 0-0 & got myself into trouble. I finished up in an ending with a rook against Max's two bishops & an inaccuracy by Max in the ending (47.e5?) allowed me to snatch a perpetual check.

Today I get white against Joshua Bishop, so it looks like my tournament might turn into the battle against the juniors, with another game against a junior!
In terms of the tournament itself, only Tony Davis & Ian Rout are on 3/3 & they face each other in round 4, with the winner (if there is one) taking the outright lead.
In the Championships, there are 5 leaders on 2.5/3, including GM Zhao & many of the IMs in the field.
Posted by MelbourneGamesCoach at 13:17 No comments:

Today I had a relatively easy win against John Langer.
This game me a chance to put both of my games from the first two rounds into the computer ... with some shocking results!
Here is my round 1 game:

The early finish allowed me time to take some photos of the venue: 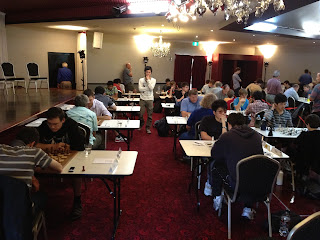 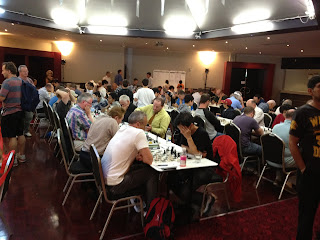 The pairings aren't out yet for round 3, but I'm expecting a tough game, whoever my opponent is.
Posted by MelbourneGamesCoach at 23:57 No comments:

Email ThisBlogThis!Share to TwitterShare to FacebookShare to Pinterest
Labels: Australian Championships, Chess, Round 2

Today was the first round of the annual (well techincally every two years) Australian Championships, this time held in Geelong, Victoria. I am playing in the reseves division, which has an upper rating limit of 2150. I'm the 7th seed in the 76 player field, so (in theory at least) I'm in with a realistic chance of a good finish in the event. I managed to get a gairly tough first round pairing, playing black against ACT junior Megan Setiabudi, who recently won the Australian Girls Masters even in Adelaide a few weeks ago. I managed to get a reasonable position out of the opening, but allowed Megan's queen to get active in the endgame, so that she had a perpetual check at the end, in spite of my mating threats.
I haven't put the game into my computer (might get around to this tomorrow night), so you'll have to wait to see the game in its entirety. Tomorrow I am paired against John Langer, who I literally know nothing about, so its a quick night for preparation (ie: I'm not doing any). Hopefully the result will be a bit better for me this time around.
In other results, there were a few upsets, the most notable in the reserves being Samuel Dalton's loss at the hands of Colin McKenzie, in what looked like a fairly crushing game from the parts I saw.
The Championship division also got underway, with a few upsets, including Bobby Cheng & Mike Steadman losing, although it is still early days & anything can happen from here!
If you want to follow the results, they are being updated daily on Chess Results, with the Championship & Reserves both online.
Posted by MelbourneGamesCoach at 05:43 No comments:

Its been a few weeks since my last post & quite a bit has happened.
I'm typing this update from Sydney, where I'm visiting family & friends for the Christmas period.
In terms of chess, I've run a few tournaments - The Victorian Lightning Championships & the MCC Xmas Swiss. The links are to the results on Chesschat.
I've also played in the Bob Brooking Round Robin & finished on 1.5/5 in the top division, which sounds OK in theory, but when you consider that I was beating both Dragicevic & Urban, I feel that I could have scored more points. Having said that, I played horribly against Morris (and lost quickly), was worse for most of the game against Penrose (and drew) & was pretty even in the game with Ari Dale until he gave me two pawns and a bishop for my rook.
I'm also playing in the Australian Chess Championships (Reserves Division) in Geelong, which starts on the 27th of December. At present, it looks like I'll be around the 10th seed in the division, which will likely have 70-80 players, so I would consider myself a chance to do well in the event, although putting things together consistently for 11 rounds in such an event is always difficult, particularly given my recent efforts to throw away winning positions!
I'll try to post updates from Geelong, but can't guarantee that I will have internet access while there.
In terms of poker, the Deuces Cracked 50k Challenge has stalled significantly. I've hardly played any online poker this month & have only played around 1000 hands (down around $20 at that!), so when added to the 5000-odd stud hands I played in November, its hardly the schedule to finish off 50000 anytime soon.
Much of the lack of online poker has been the result of playing much more live poker at Crown, where I am up just over $1000 since the start of November, playing $1/2NL. Although its not a huge amount, its reasonable for the stakes & I feel that most of the time I am playing well, although there are still some sessions where I find myself either struggling from the start due to the dynamics of the table (typically when there are multiple aggressive bigger stacks at the table), or midway through sessions, due to either a run of unplayable cards, or some unfortunate results.
I also final tabled the 7-game event at the November Joe Hachem Deepstack Series, placing 5th, although that was the only tournament I have played at Crown of late.
Since heading to Sydney for the holidays, I've managed to win two APL events, both at venues at Ashfield, which has made my recent APL record look much more impressive!
In terms of making videos, I'm midway through preparing the material for episode 2 of the Broken Arrow, which will be largely PowerPoint-based, in a similar format to Episode 1. I've had some positive feedback about the first episode and the PowerPoint format used, & I feel it works well for explaining the basic concepts & ideas of the opening much better than simply using Chessbase, although it does make the preparation of the episodes somewhat more labour-intensive. Having said that, when I get to covering games in detail in future episodes, this will mean that the presentation format will be largely Chessbase-based.
I'd also like to wish my brother Michael a speedy recovery! He broke his leg playing cricket last week & has only just got out of hospital, with multiple pins in his leg, a cast attached to it, as well as crutches & a wheelchair to help him get around! Its put am end to his 2011/12 cricket season, but hopefully he can recover & play even better in the 2012/12 season!
Posted by MelbourneGamesCoach at 18:30 No comments:

Its here!
The first episode of my series on the Broken Arrow (1.d4 g6 2.c4 Bg7 3.Nc3 c5 4.d5 Bxc3+!).
I've also got the outline for five more episodes to come, so expect to see some more videos in the future on the opening.
As for episode 1, I outline the plans for the series (which requires viewer feedback!) and look at a brief history of the Modern Defense, before examining the game Gurevich-Dzindzichashvili, the first game to feature this variation, in some detail.
The plan for episode 2 is to look at the key ideas, plans & typical piece placements in the opening, so keep an eye out for that in the not-too-distant future.
In the meantime, enojy the first episode of the series & remember to send your comments & feedback about the episode & series as a whole to melbournegamescoach@hotmail.com

Posted by MelbourneGamesCoach at 05:59 No comments: