Day three of the Hjorth Open saw the top players begin to play one another & there were surprisingly few draws on the top boards. By the end of the day, only IM Max Illingworth was able to keep a perfect score intact to move to 5/5, however IM James Morris was only half a point behind him after winning all of his games following his round 1 bye.

In terms of games, two stood out in round 4 - Max Illingworth's win over fellow IM Igor Goldenberg, while IM James Morris found a pretty finish against Max Chew Lee.

Once again, the day's highlight was the lecture at the end of the day, this time presented by IM Guy West. Although Guy only showed two of Greg's games - his win against American Larry Musa from the 1978 Australian Championship & his win against GM Tony Miles from the 1984 British Championship - he told a number of stories & anecdotes about Greg from throughout his life, which were both amusing & informative at the same time! 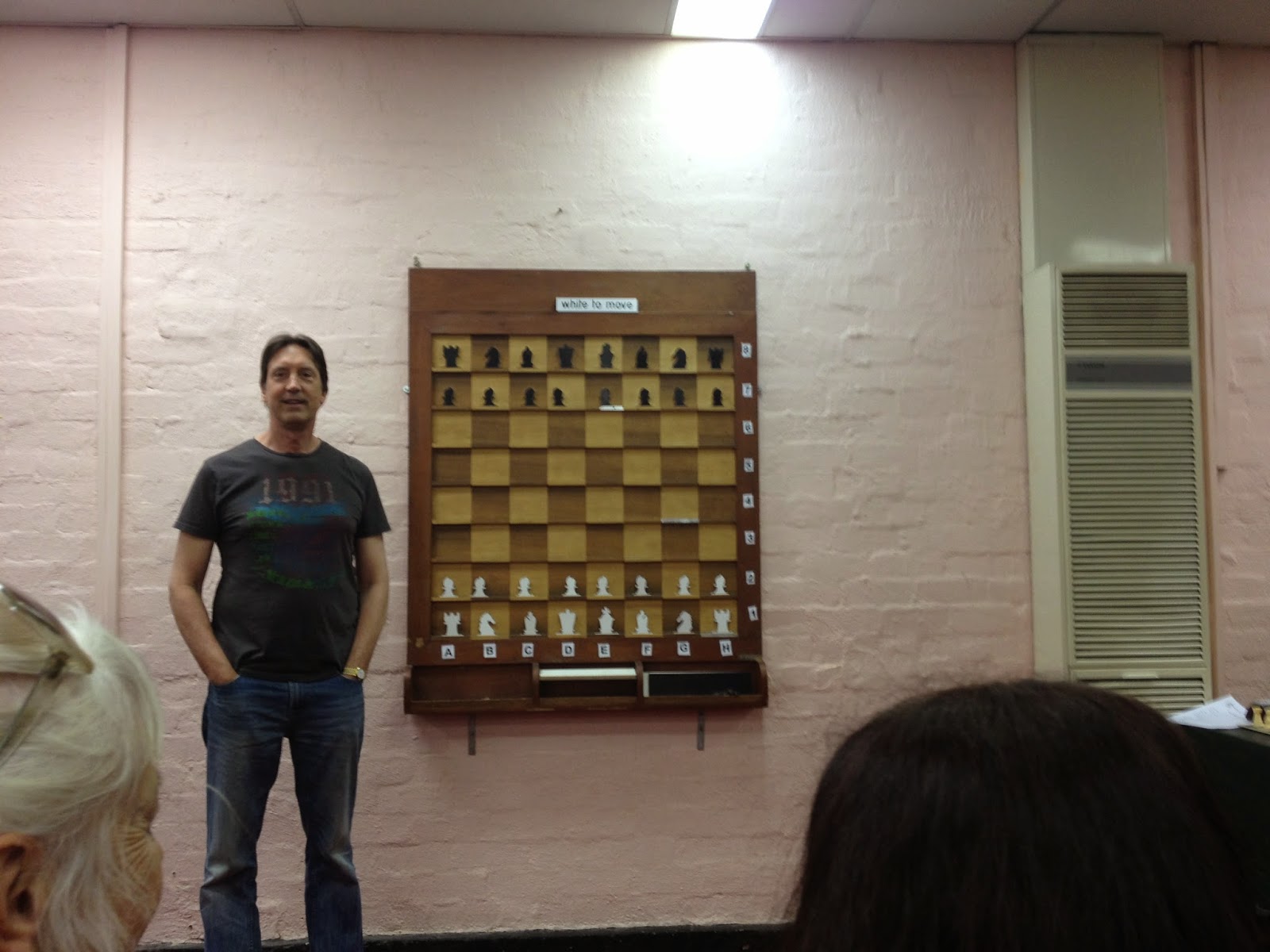 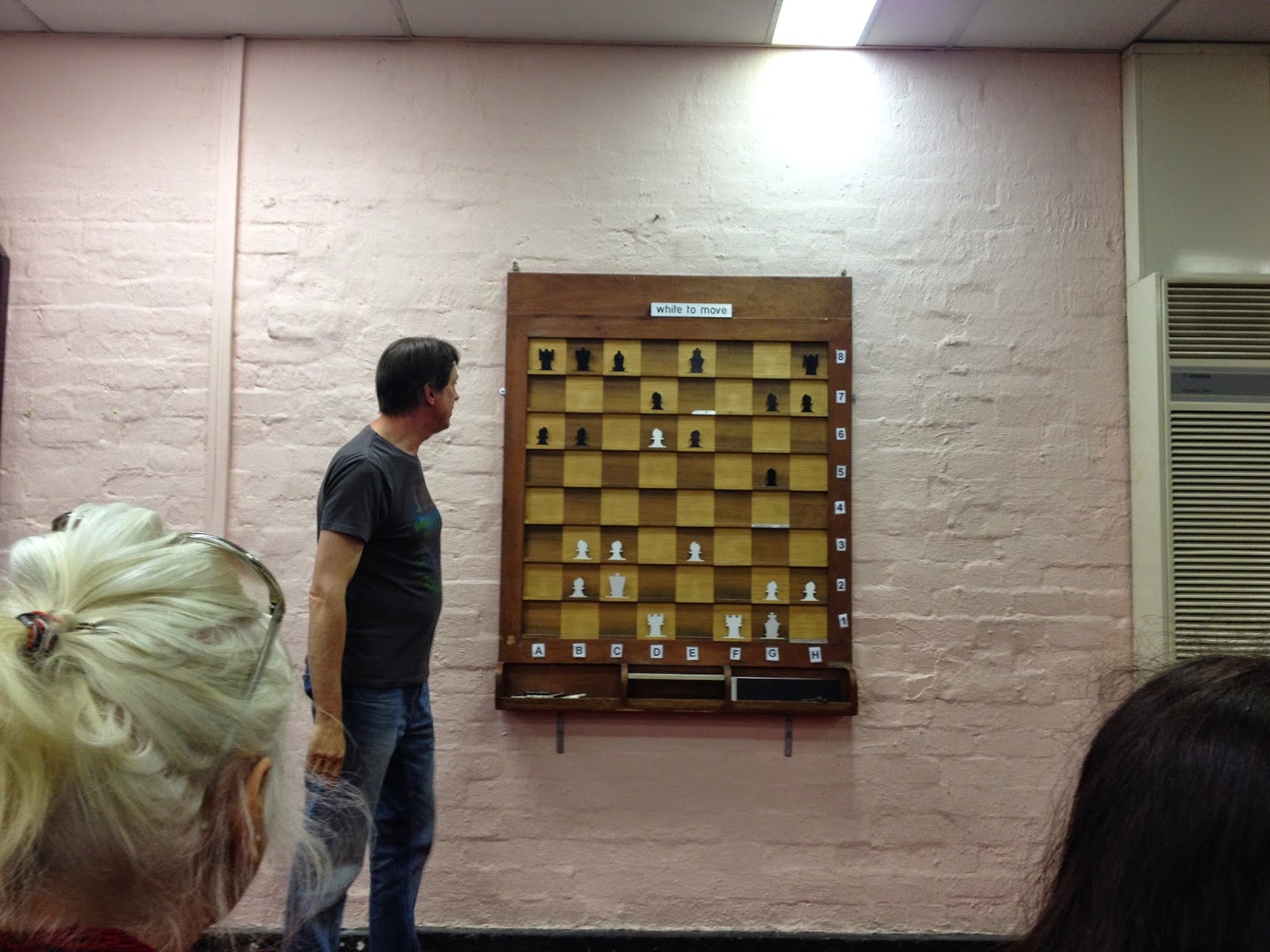 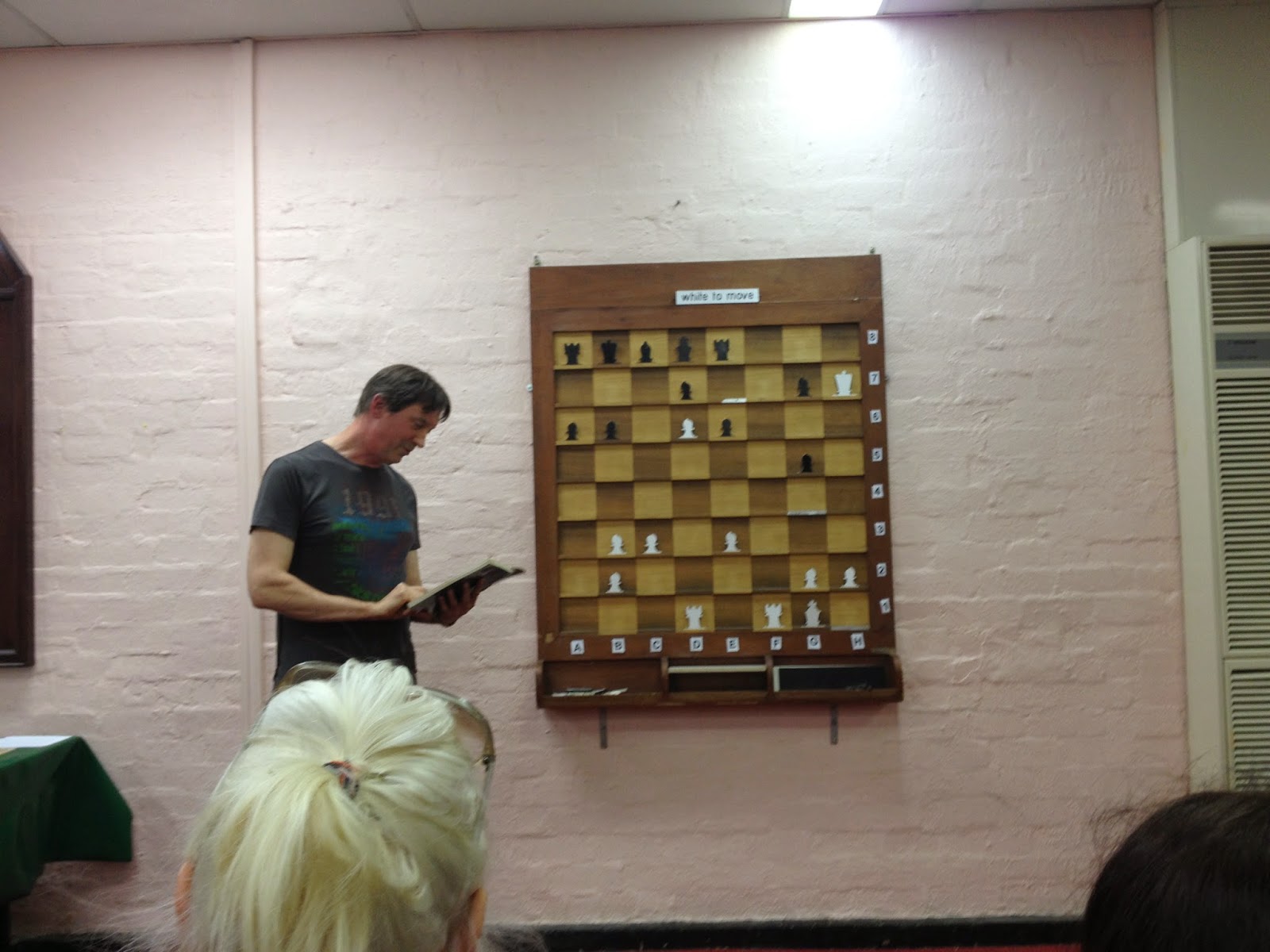 Guy reading an interesting profile that he wrote about Greg Hjorth for Ian Rogers' famous book Australian Chess - Into the Eighties, although he did question why he was making such bold, though ultimately often true, statements about this teenage prodigy while Guy himself was only in his early twenties! 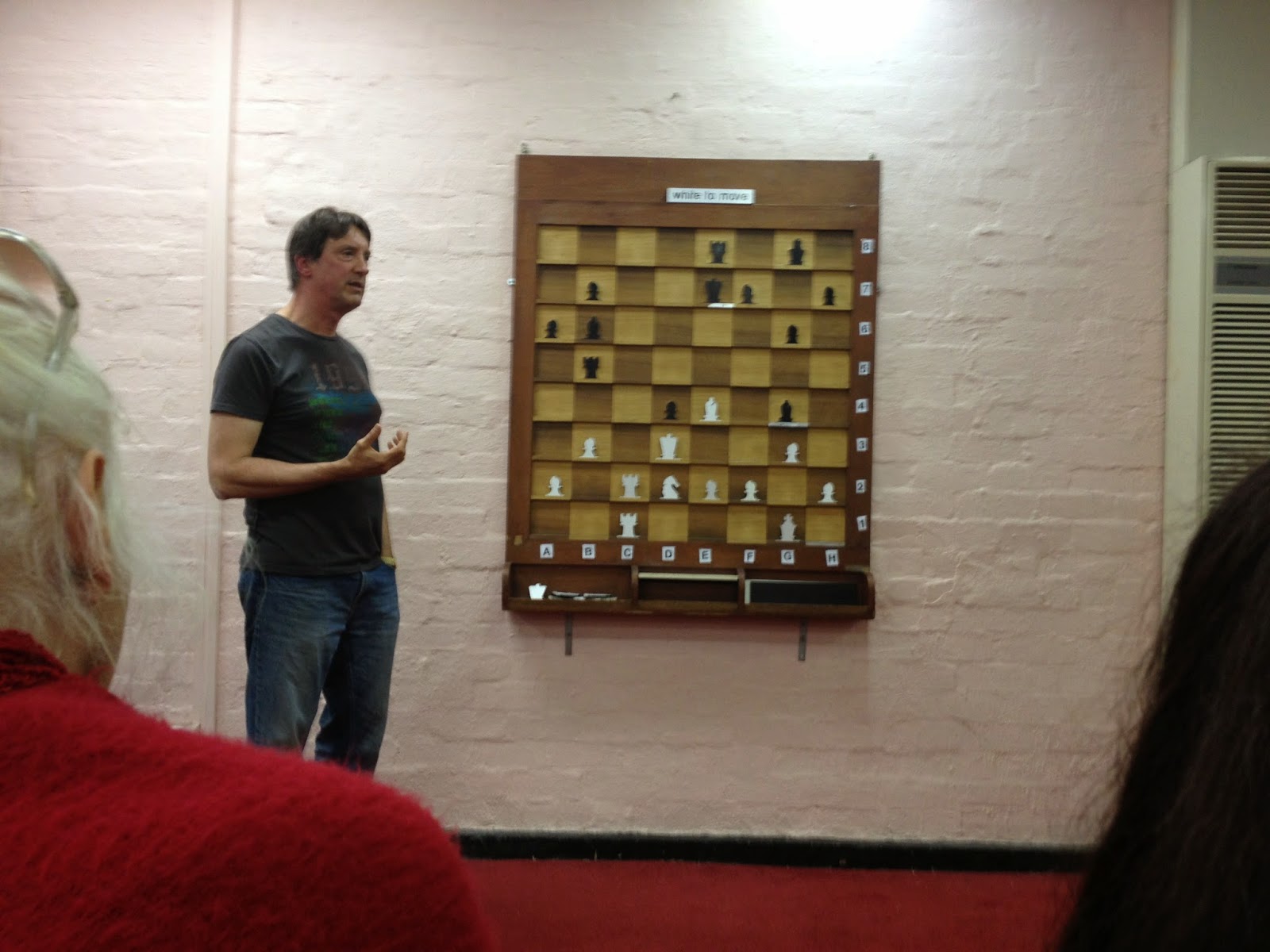 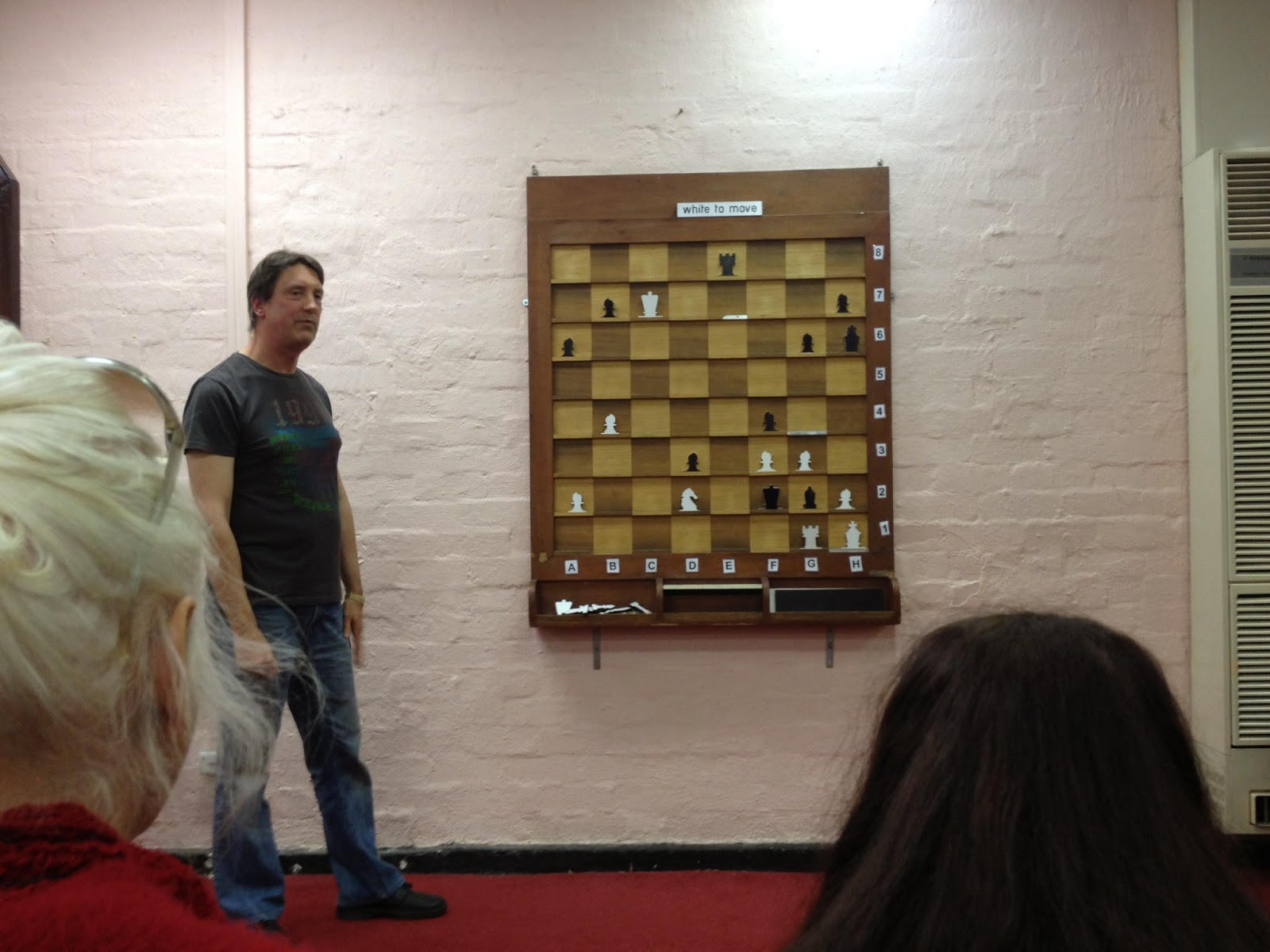 IM Guy West in front of the final position in the famous Miles-Hjorth game at the end of the lecture.
Posted by MelbourneGamesCoach at 18:17 2 comments:

Day two of the Hjorth Open saw seven players finish the day on a perfect 3/3, and these were unsurprisingly seven of the top 8 seeds (third seed James Morris took a half point bye in round 1, but was leading the chasing pack on 2.5/3).

The second day saw more upset results than the first, with Jody Middleton & Richard Voon beating higher rated opponents in round 2, while Richard Voon also scored another upset win in round 3. There were also a few draws across the day, while some of the unrated players (young & old) scored wins against their rated opponents.

One of the more exciting games from day two was from round 3, which saw a wild battle between FIDE Masters, with Domagoj Dragicevic's King's Gambit turning sour fairly quickly against Luke Li.

However the highlight of the day was the lecture presented by Grandmaster Ian Rogers about Greg Hjorth. Ian told stories of Greg's time in the chess scene & showed a number of games or game fragments played by Greg, including wins over former Australian Champion Serge Rubinraut & American Grandmaster Robert Byrne. He also showed Greg's impressive analytical ability in an adjourned position from one of Darryl Johansen's games from the 1982 Olympiad (where Greg was the second reserve & did not play the game, but played a key role as an analyst for the other team members). 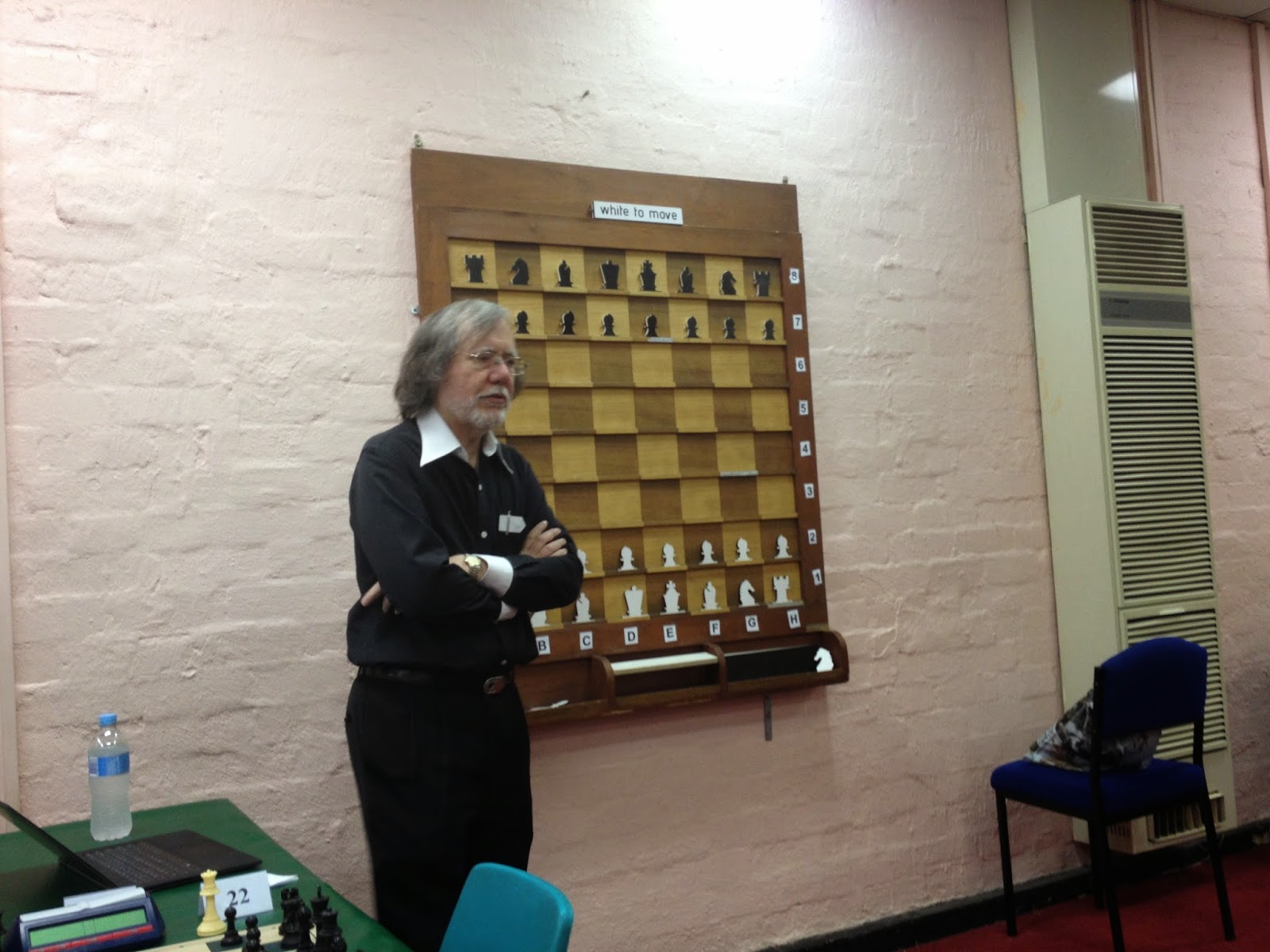 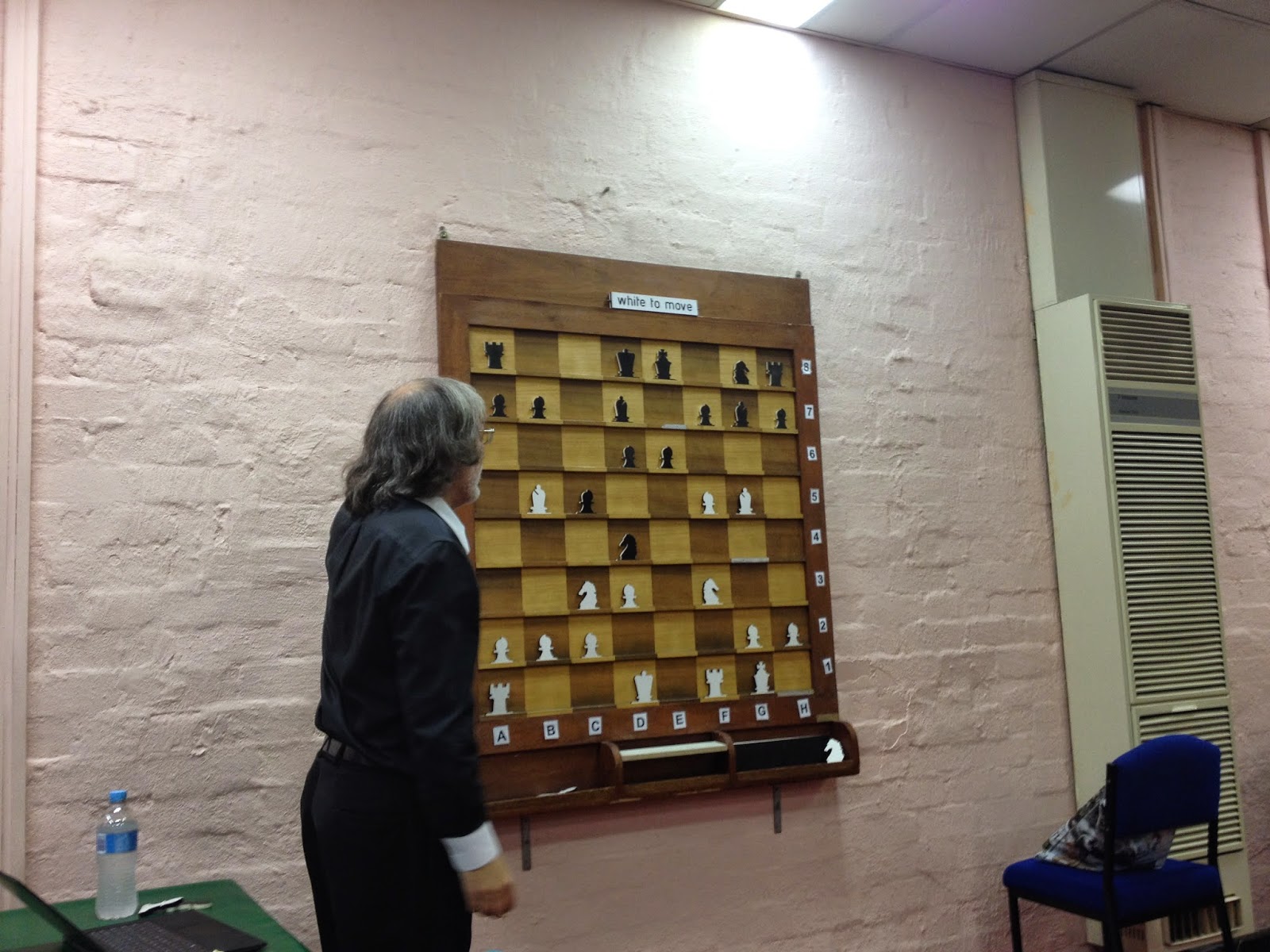 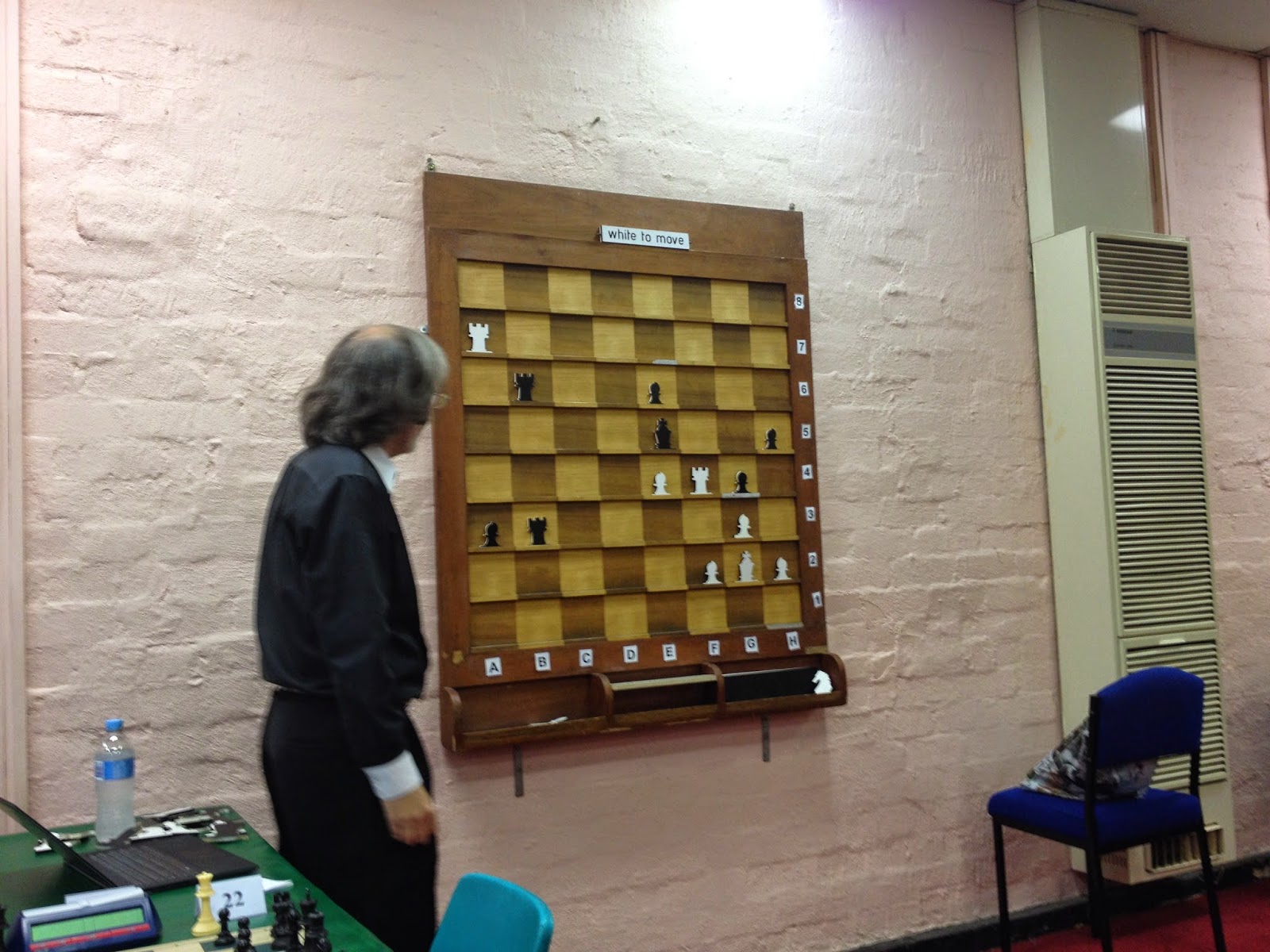 An adjourned endgame position of Darryl Johansen's from the 1982 Olympiad, where Greg's analysis proved instrumental in Darryl's eventual victory 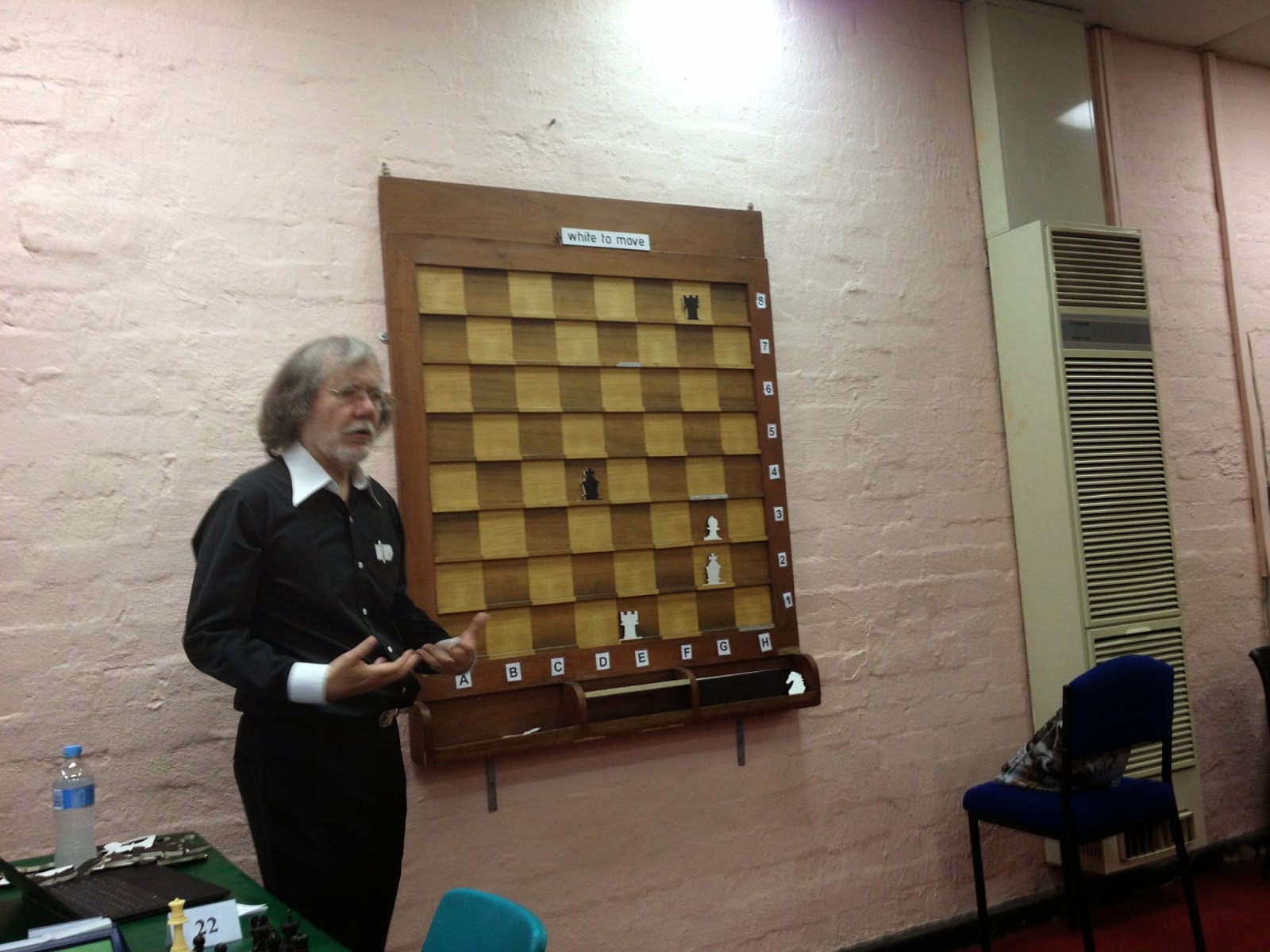 GM Ian Rogers explaining how Greg Hjorth was able to hold the following position against Filipino GM Eugene Torre, with the key idea being to check the white king if it tries to move in front of the pawn, while the king (in spite of being cut off from getting in front of the pawn) prevents the rook from protecting the pawn from the side. 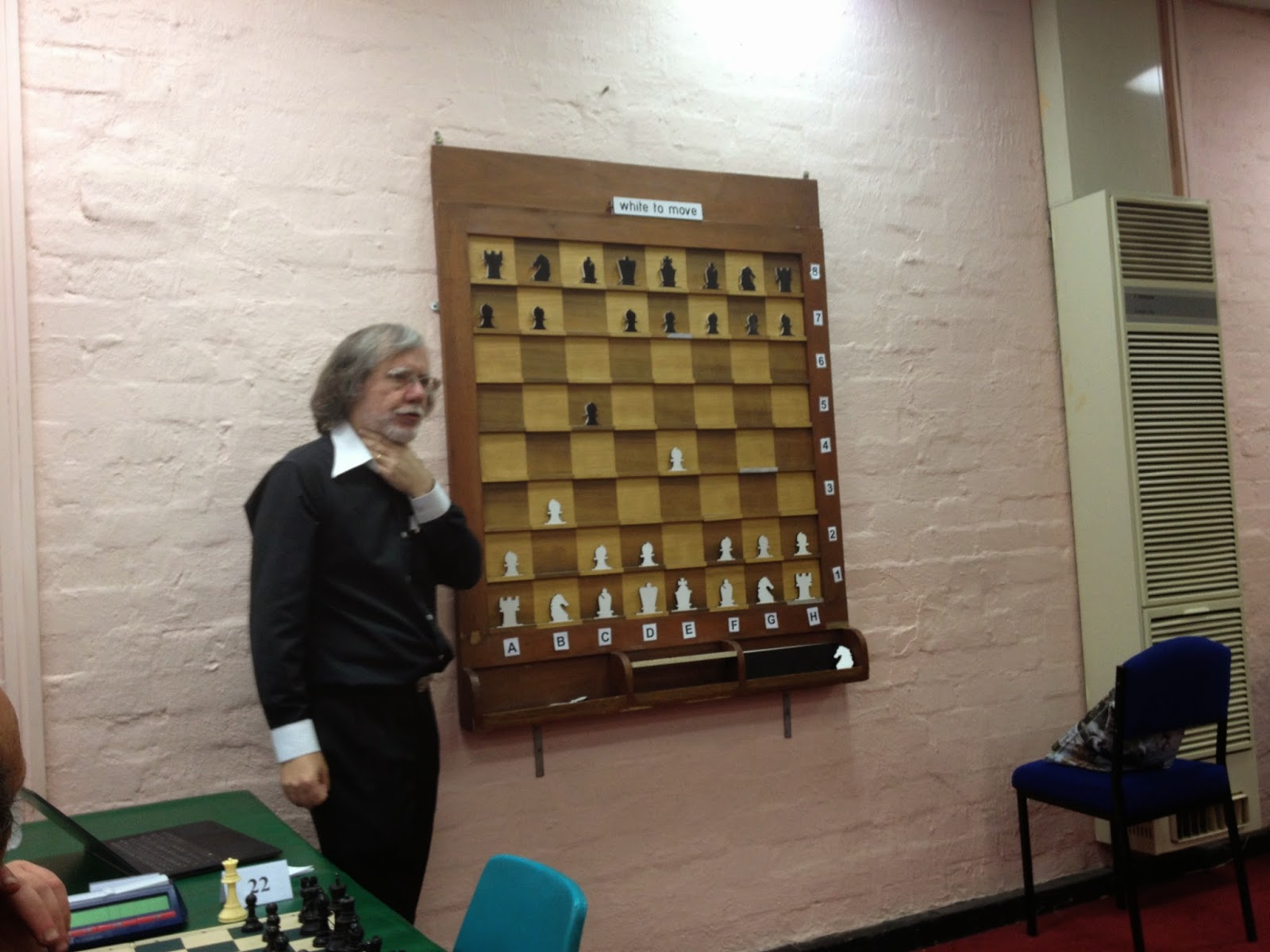 GM Ian Rogers explaining one of Greg's often-used sidelines against the Sicilian Defence - 2. b3, which was almost unheard of in the late 1970s & early 1980s when Greg was playing.
Posted by MelbourneGamesCoach at 22:44 No comments: