So round 1 of the AFL has now finished (yes, I'm one of the many who are somewhat annoyed at the split round start to the season) & the various fantasy competitions are underway.
With the apparent falling out between Virtual Sports & the AFL, there are now three big AFL fantasy competitions running in 2014 - the official AFL Fantasy comp, the Herald Sun run AFL Supercoach & the Virtual Sports run Real Dream Team.
I had a decent start in all three competitions,  AFL Fantasy 2144 (rank 10837/166604); AFL Supercoach 2233 (rank 12835/230702); Real Dream Team AFL 2114 (rank 2458/31632); Glad I scored over 2000 in all three comps (a good benchmark score to aim for), though a little disappointed with a few of my scores in AFL Fantasy, which is the main comp I am playing.
Here is the team I went into round 1 with & how they scored: 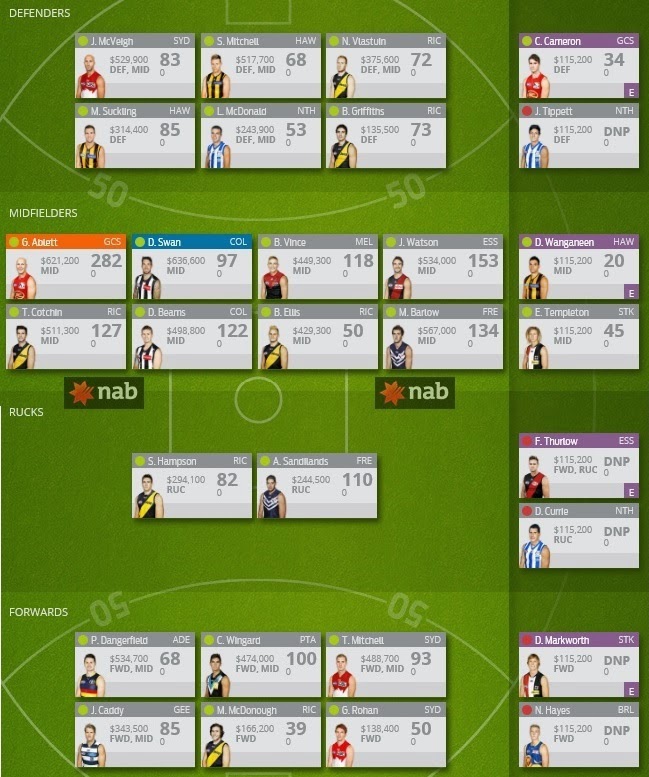 With the 'free hit' in round 1 (unlimited trades until the start of round 2) I decided to load up the midfield in an attempt to get a big round 1 score & all my selections (with the exception of Brandon Ellis) did fantastically. I was also happy with the cheap ruck options I went with - Aaron Sandilands & Shaun Hampson combining for just under 200 is a good score for such cheap rucks! Many of my premium forwards performed well - Chad Wingard, Tom Mitchell & Josh Caddy, however Patrick Dangerfield was a bit of a let down & my cheap option of Gary Rohan & Matt McDonough were decent for rookies, but in hindsight I should have played a few mid rookies, who can score big for a relatively cheap price. The Defenders were a bit of a disappointment though, with 85 being the top score there, with Sam Mitchell & Luke McDonald being the disappointments.
I'll be re-vamping my team prior to round 2 & I think it will look much more like my Real Dream Team side, but with a few changes.
My Real Dream Team round 1 team (with scores) was as follows: 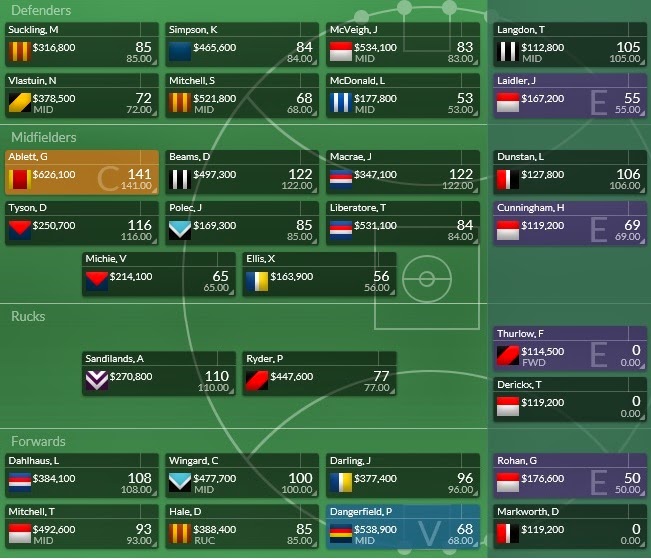 Much happier overall with this side - the lack of standout forward rookies means my choice of 6 premium/breakout (non-rookie) players is probably the way to go in fantasy competitions this year. Rucks were solid, although I expected a slightly higher score from Ryder (have Hale in the Forwards as my 'Sandilands insurance' in case he picks up another injury, so I can avoid a trade & still have 2 solids rucks on the ground). I think Langdon will have to move onto the field this week after his week 1 performance & I also like the look of Langford from Hawthorn (though not in my team at present). Happy with many of my midfield selections too - Liberatore scored a little under what I was hoping for, but it was still decent & MacRae was fantastic. Rookies were all solid & I obviously would have scored higher if I had Dunstan on the field over Ellis or Michie, but its really hard to pick which rookie will have a big week in advance!
I think my round 2 AFL Fantasy team will be something similar to the RDT side, but with the extra trades, I will probably take a few more risks as it is easier to correct them with the additional trades.

I should also mention my AFL Fantasy league - use the code 2K5XUSVE to join & take me on!

I'm hoping to do an occasional update on my fantasy progress (which may become more frequent if I have the time or inclination), so feel free to check back later for more thoughts (or have a look at a few of the AFL-related pages on the right column of the blog).
Posted by MelbourneGamesCoach at 17:02 1 comment:

So I finally decided to play a chess tournament ... and hopefully I will play a few more this year than I have in recent years (Doeberl Cup & Sydney International are the next big weekender-type events I'm planning to play in).
This year the Begonia Open moved from its previous home of the School of Mines, with its infamous 'pit' to Ballarat Clarendon College to accommodate for the growing number of entrants to the tournament. I found the new playing hall to be generally very nice, although the lack of air conditioning (albeit with a 'passive cooling' system being used in the building) still being a little issue. It was also a bit out of town compared to the previous venue, however when travelling that far from Melbourne, an extra kilometre or two isn't that much of a big deal (although it does make a car more desirable during the tournament). 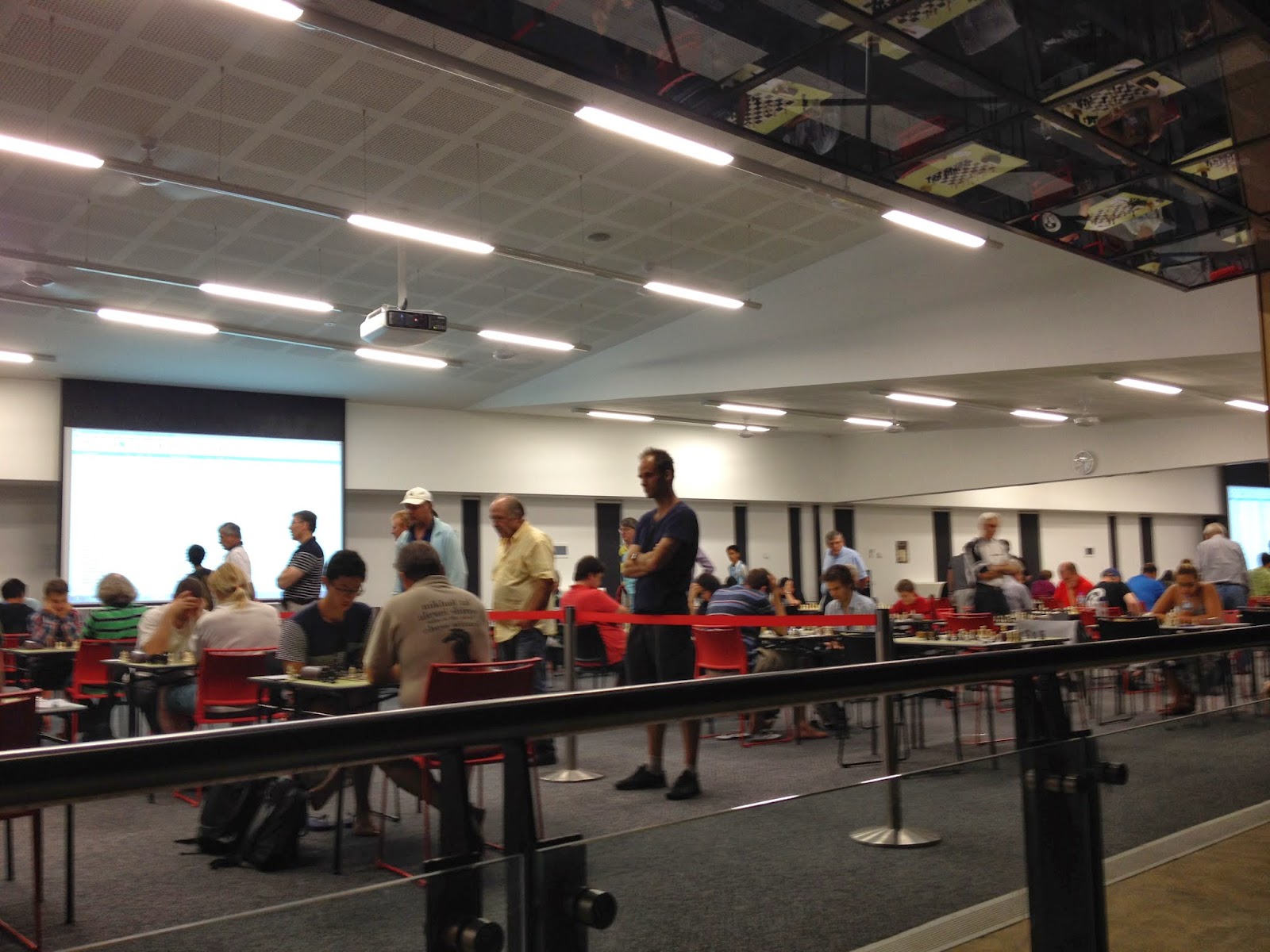 A few different views of the new playing hall 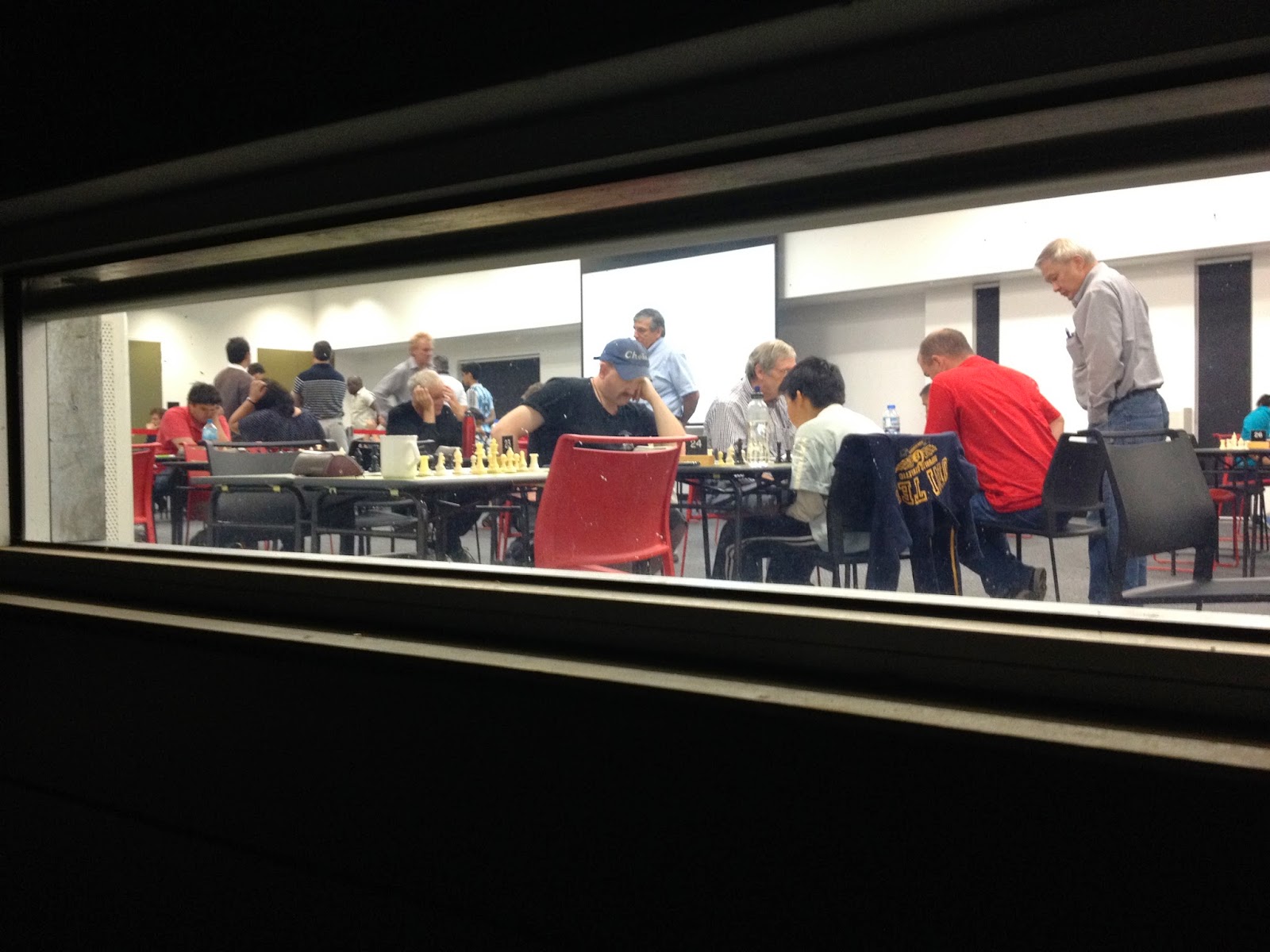 Overall the tournament finished in a tie for first between FM Chris Wallis & FM Kanan Izzat from Azerbaijan with 6/7. I finished further back in the field on 4/7, scoring 3 wins, 2 draws & 2 losses. Although I felt I played OK, the loss to Russell Murray in round 6 was particularly disappointing, as I felt that the position was very good for me (later confirmed by various engines), but I couldn't find the knockout blow to finish the game off!
Anyway, easing my way into looking at my round 6 game, can you find the finish to my round 4 game against Geoffrey Barber? 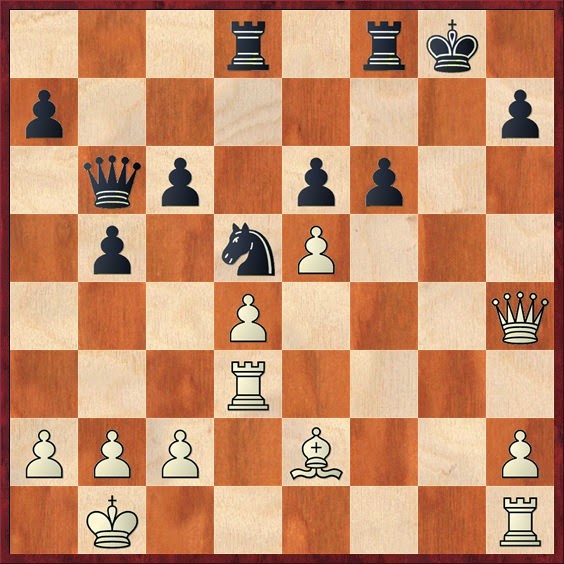 In round 6 I played the Blackmar-Diemer Gambit against Russell Murray & he played the tricky Ziegler Defense, which has many similarities to the Caro-Kann & is considered to be one of the toughest variations against the BDG. I played the Alchemy variation & Russell played what should have been a losing move, but I didn't find the best follow-up & went on to lose rather quickly! 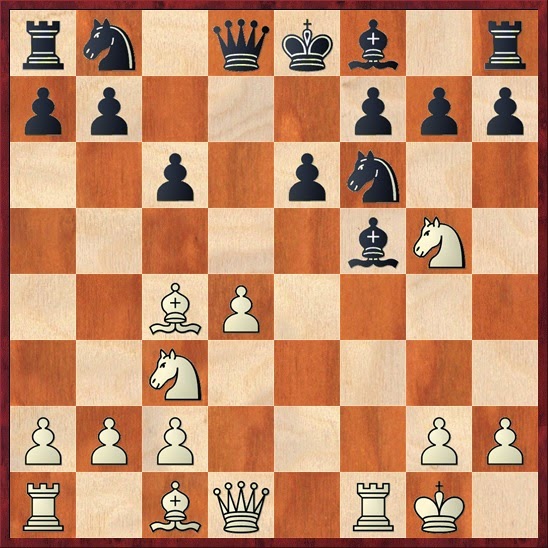 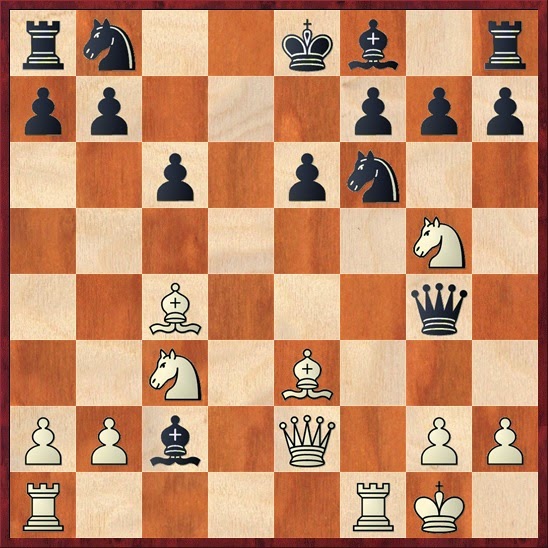 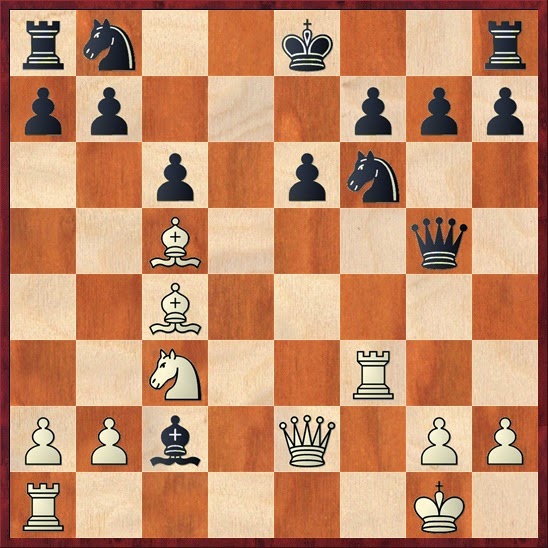 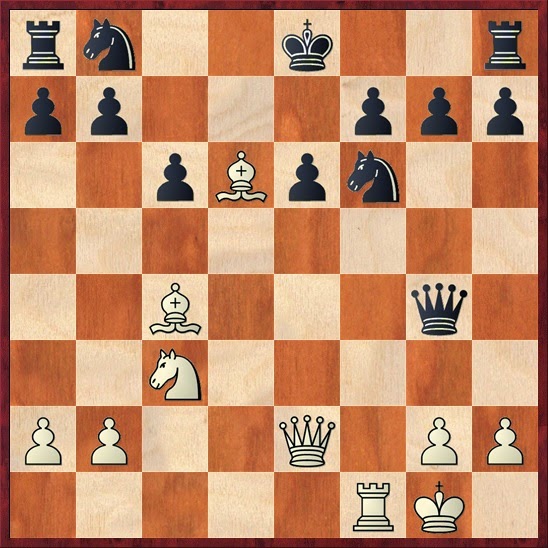 This week in the Northern Star Chess squad, the focus was on mating patterns. As a result, we looked at a number of positions with a variety of checkmate themes. Let's see how you go with them (as with last week, the solutions are below the puzzles in white): 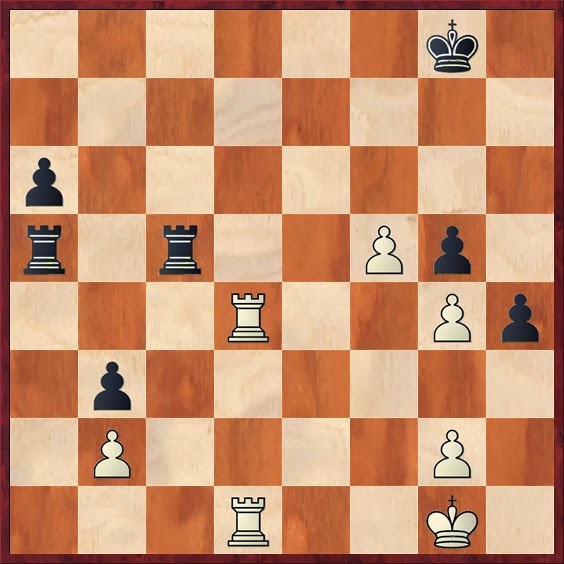 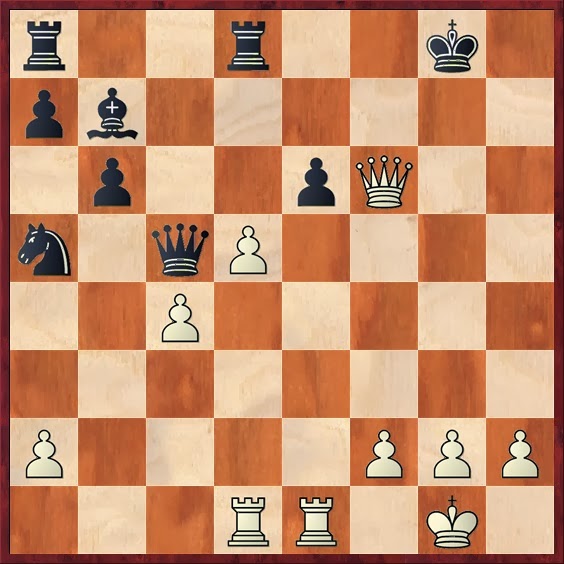 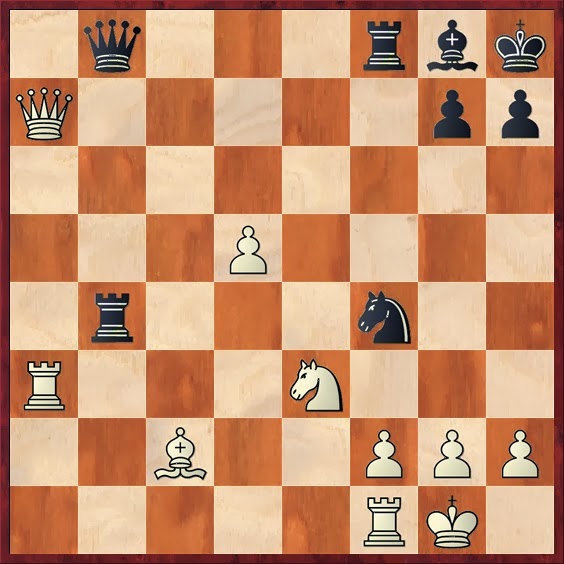 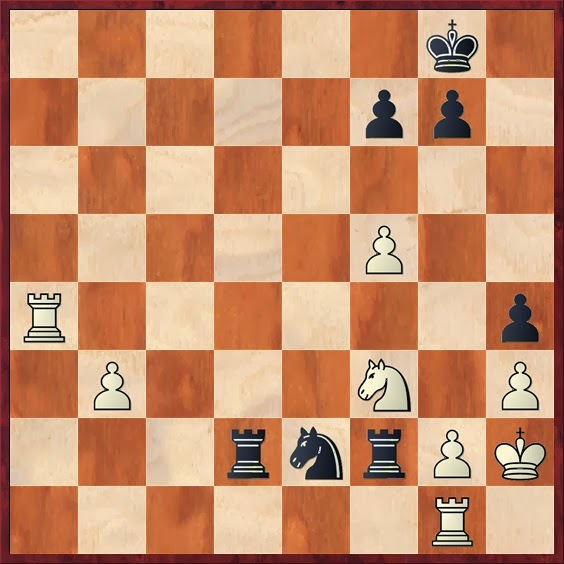 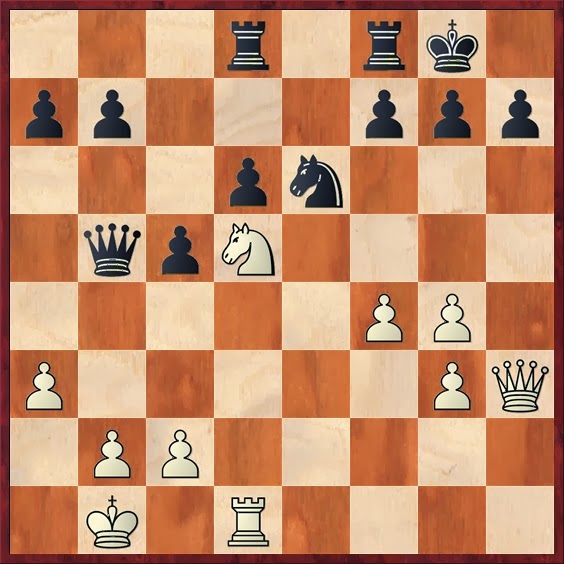 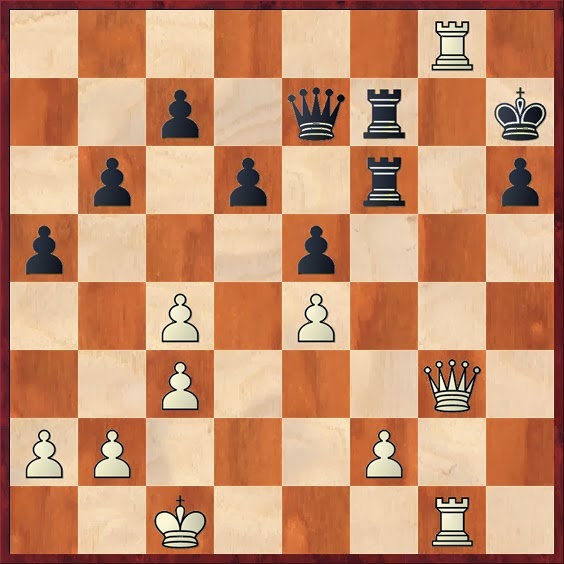 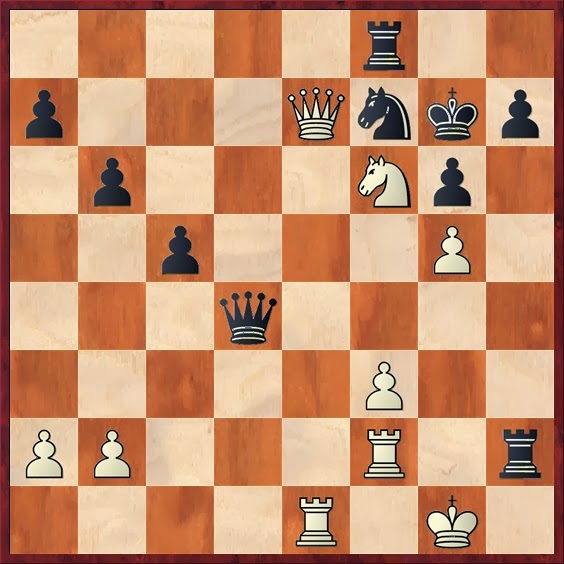 Black to move (though there is also a win with white to move): 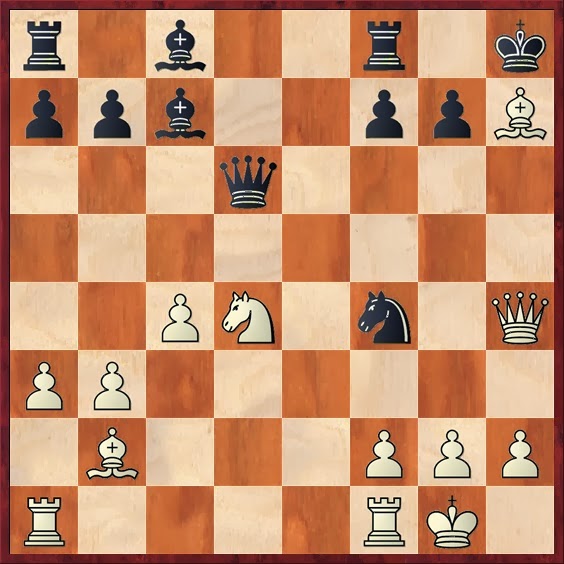 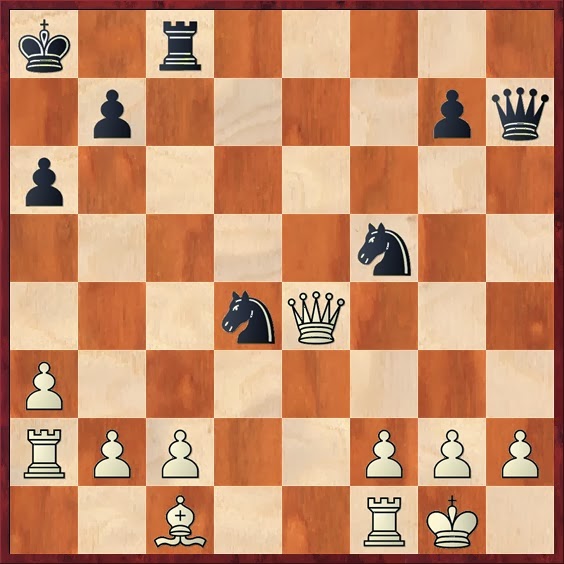 After a break & games (which will be analysed during the week), we looked at the following game which had a number of themes to it - tactics, particularly in the opening stage; the concept of compensation & what it means; use of the initiative; as well as prophylaxis & paralysing an opponent's position.
In some ways its amazing to think that the player on the black side who appears helpless at the end of the game is in fact a 2600+ GM!

There are a number of critical moments in the game:
8. Bg2! is a stunning idea, as is the follow-up 9. 0-0! with white temporarily sacrificing a piece to quickly develop all of their pieces.
11.Nb3 as a way to maintain the initiative, which is an important aspect of the opening phase of the game.
17. Rxc5! as an exchange sacrifice, again designed to maintain the initiative, but also allow for thoughts about the idea of compensation to be shared.
21. Bd6! to keep black's bishop from getting into the game, using the concept of prophylaxis.
24. c5! maintaining the bind on the black queenside pieces & not allowing them to get involved in the game
Also the final idea of trapping the black queen & being on the lookout for these tactical possibilities, was also a useful idea from the game.