The penultimate day of the Australian Junior for 2015 saw Yi Liu clinch the under 18 open title after yet another victory. Congratulations Yi! His challenge for tomorrow is to try to win his game, as this will apparently push his live FIDE rating past the 2300 mark & he will be able to claim the FIDE Master title - not a bad incentive to go for a final round win after having the title already won!
The other divisions are all still undecided, which should make for an exciting final round!
The under 18 & 16 girls event has been lead from the start of the event by Kristine Quek, however she lost her round 7 game to Zhi Lin Guo, which saw her lead over Denise Lim narrowed to just half a point. Kristine is still the favourite to win the event however, as she has played all of the leading players in the event & is paired against Amy Nicholson (currently on 1/7) in the final round.
The under 16 open event has turned into a race in two, with Patrick Gong maintaining his slim half point lead over Tom Maguire since round 5, when Gong won their individual clash. As with the girls event, both players have played a number of their nearest rivals, so both are favourites to win their final round games, but favouritism does not guarantee an outcome.
The under 14 open event has seen Haran Salasan leading the event from the start, however top seed Ray Yang has followed him closely, winning all his games after being beaten by Haran in round three. Haran plays Guowen Zhang in the final round in his quest for the title.
The under 14 & 12 girls event sees Cassandra Lim a point clear of her nearest rival Jody Middleton, however she still needs at least a draw in her final round game against Helen Tong to secure the title.
The under 12 open is the real lottery out of the remaining titles, with three players tied for the lead on 6.5/8 - Matthew Clarke, Jason Wang & Brendan Zou, while Ryan Lane & Michael Ostapenko are just half a point further behind on 6/8. The final round pairings see Wang playing Zou & Clarke playing Lane, while Ostapenko can only hope to tie for first at best & plays Kayson Wang.
Playoffs for some of the Blitz titles were also played, with the Lim family taking the honours, with Cassandra Lim beating Jody Middleton for the under 12 girls title 2-0, while younger brother Christopher Lim beat Ruicheng Wang 2-0 to take the under 10 open blitz championship. Chris has also beaten Ruicheng in a playoff for the under 10 Open title earlier in the week ... and as if they had not played each other already, they are paired again in the final round of the under 12 open event!

Strange position of the day comes from the game between Clarise Koh & Zoe Harrison from round 7 of the under 18 & 16 girls event. 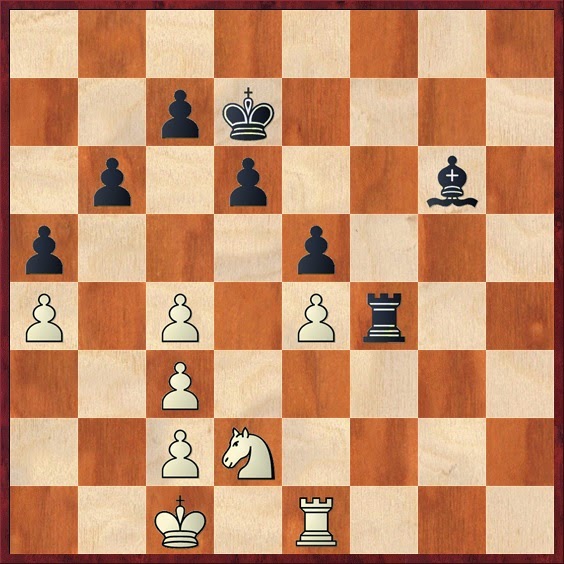 I'm not sure of the exact positions of the kings, but think the diagram was pretty accurate - it's not often you see tripled c-pawns in a game! The game eventually finished in a draw - Zoey tried a central pawn break to make some progress, but this allowed Clarise's knight & rook to get active & the players eventually agreed to a draw.
The winning plan has to involve exploiting the weaknesses in white's pawn structure, so maybe a plan of Bb6-e8 to attack the a4 pawn (after the black king moves), combined with a Rf4-f2 move & a possible return to b6 for the bishop or a king march towards the d-pawn could have been enough for Zoe to win the position.
Posted by MelbourneGamesCoach at 09:24