Day 7 of the Australian Juniors was very different for the different tournaments because of the heat - the room with the under 18 open, under 16 open, under 14 open & under 12 & 14 girls was air conditioned, so the players only had to deal with their opponents in the usual manner. The other hall where I was stationed for the day, with the under 12 open & the under 16 & 18 girls was a battle against both the heat, as well as one's opponent. More than any other day, I had a number of parents ask me to take a cup of water or a drink bottle to their child's table, as in spite of a number of fans, it was still at least 5 degrees hotter than the other room.
In the under 16 & 18 Girls event, Kristine Quek leads with 4.5/5, half a point ahead of Denise Lim, with Joanne Mason a further half point behind. There are still a few tough opponents for the leaders to play, but at this stage I would expect the winner to be out of Kristine & Denise.
In the under 12 open event, four players are tied for the lead on 5/6, Kayson Wang, Ryan Lane, Matthew Clarke & Brendan Zou. However with so many draws on the top boards so far in the tournament, there are still 19 players within a point of the lead!
In the other room, Yi Liu continues to dominate the under 18 open field. Cassandra Lim is doing a similar thing to the under 12 & 14 girls field. The under 16 open sees Patrick Gong continue to lead, although Tom Maguire remains half a point behind him, while in the under 14 open, Haran Salasan is a somewhat surprising leader of the event with 5.5/6, but there are plenty of players close behind him looking to take his place.
Full results for all events are available on the Results Page.
Canberra Grammar, which is playing host to the Australian Juniors this year, has quite a history of famous names that have attended the school at various times, from a variety of walks of life. One item of note is the Dux of the School honour board, which sees the name E.G. Whitlam no less than three times, in 1932, 1933 & 1934! I'm assuming that the school in its early years may have only gone to 'fourth form' (year 10) & then expanded to cover the HSC or equivalent when Whitlam was in his final two years of schooling. 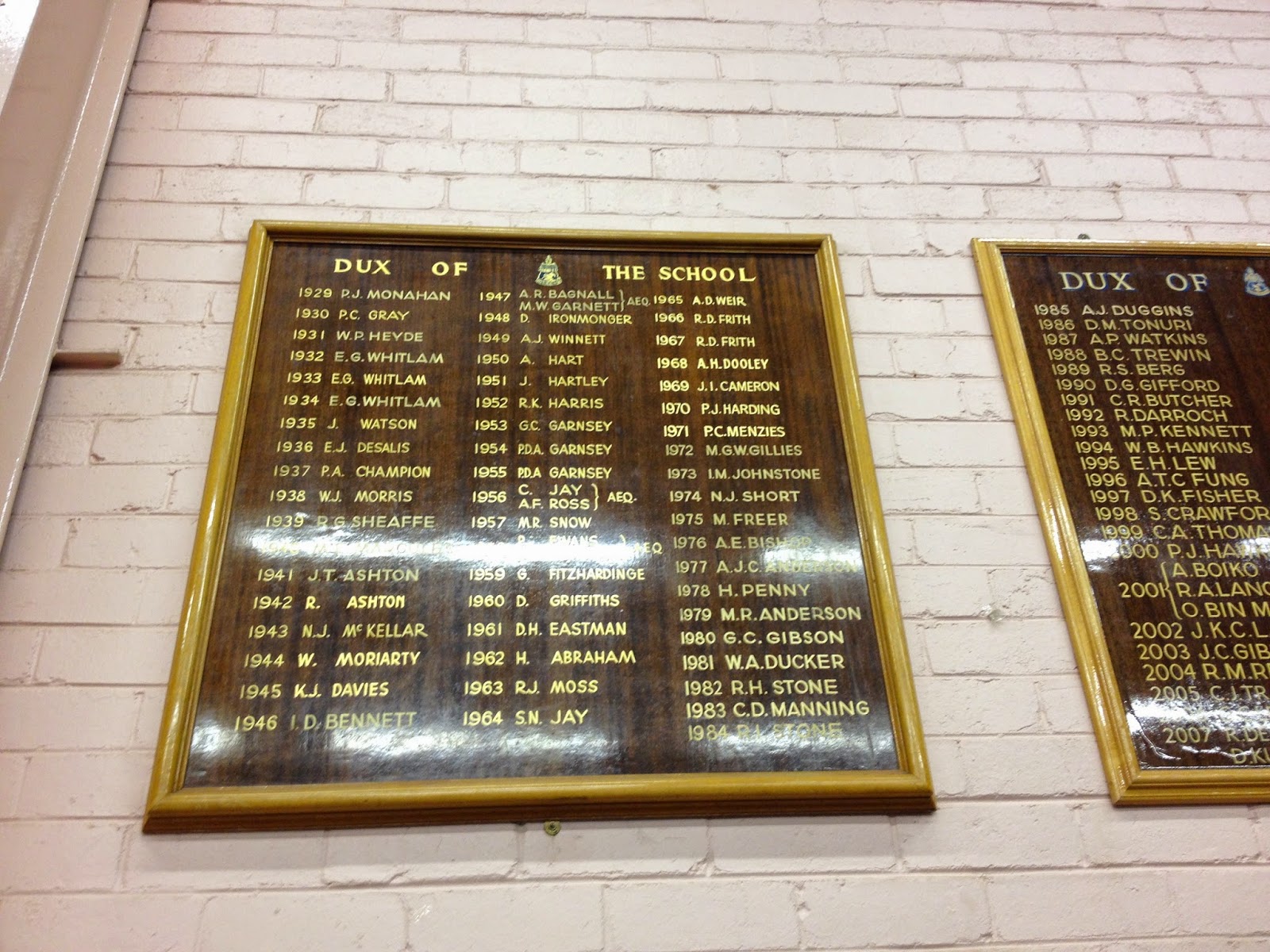 Other famous, or infamous alumni of the school include Kerry Packer, 1961 Dux David Eastman who was convicted (and recently pardoned) for the murder of Colin Winchester, as well as Jackie Chan (apparently briefly).
Posted by MelbourneGamesCoach at 13:44