Today was something of a strange day, starting out rather slowly. As the arbiters are staying in a completely different town in Norway, we take a bus to Tromso each day & given that there was nothing planned for the morning, the bus was only scheduled for 3:30pm. This meant a rather relaxed start to the day - after a stroll over to the reception/restaurant area for breakfast, I returned to my room to relax, continuing to read the book The Professor, the Banker, and the Suicide King, which I started to read on the flight to Tromso. It details the series of poker games played by American banker Andy Beal against 'The Corporation' (a group of the best poker players in the world) in Las Vegas in the early 2000s. I'm just over half way through & it is a fascinating read!
After a while I managed to get the TV in the apartment working (it had been unplugged, both at the power point & the antenna), but there was nothing on TV of interest that I could get (it seems as though one channel screened Masterchef Australia, but it was not available on the TV in the apartment unfortunately). A little later, I made a trip back to the reception area for lunch (provided at the Malangen Brygger today, rather than the usual Clarion Edge hotel in Tromso), followed by more relaxation before the bus finally arrived mid-afternoon to take the arbiters to Tromso. Also note that when I say mid-afternoon, this is simply an indication of the time rather than anything else - as you may be aware, in this part of the world, there is no sunset (or sunrise) in summer, although the sunlight is brighter during the middle of the day, meaning you can happily go for a stroll at 2am (or any time) & not need a torch to see where you are going! 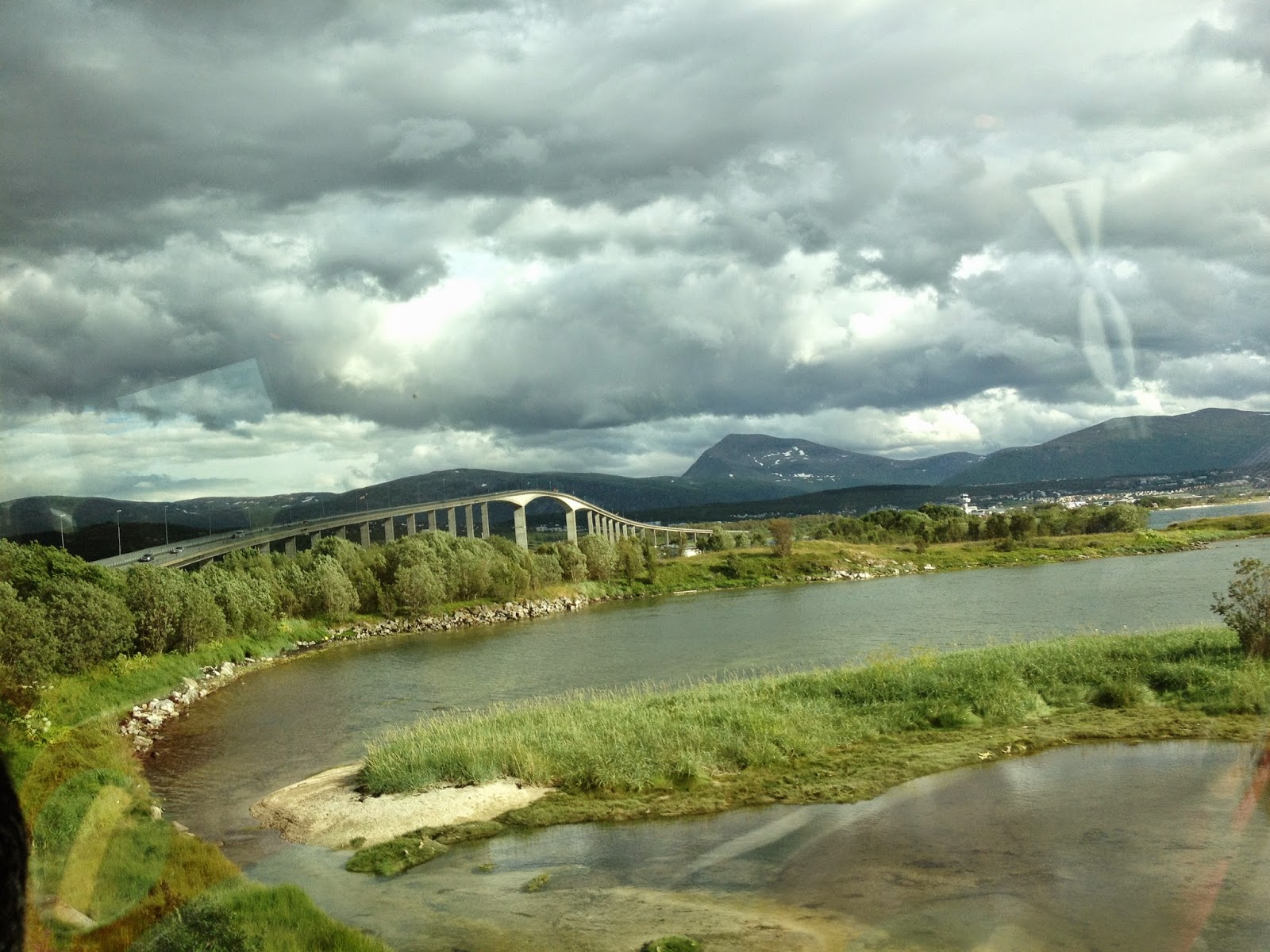 A view of the bridge into Tromso 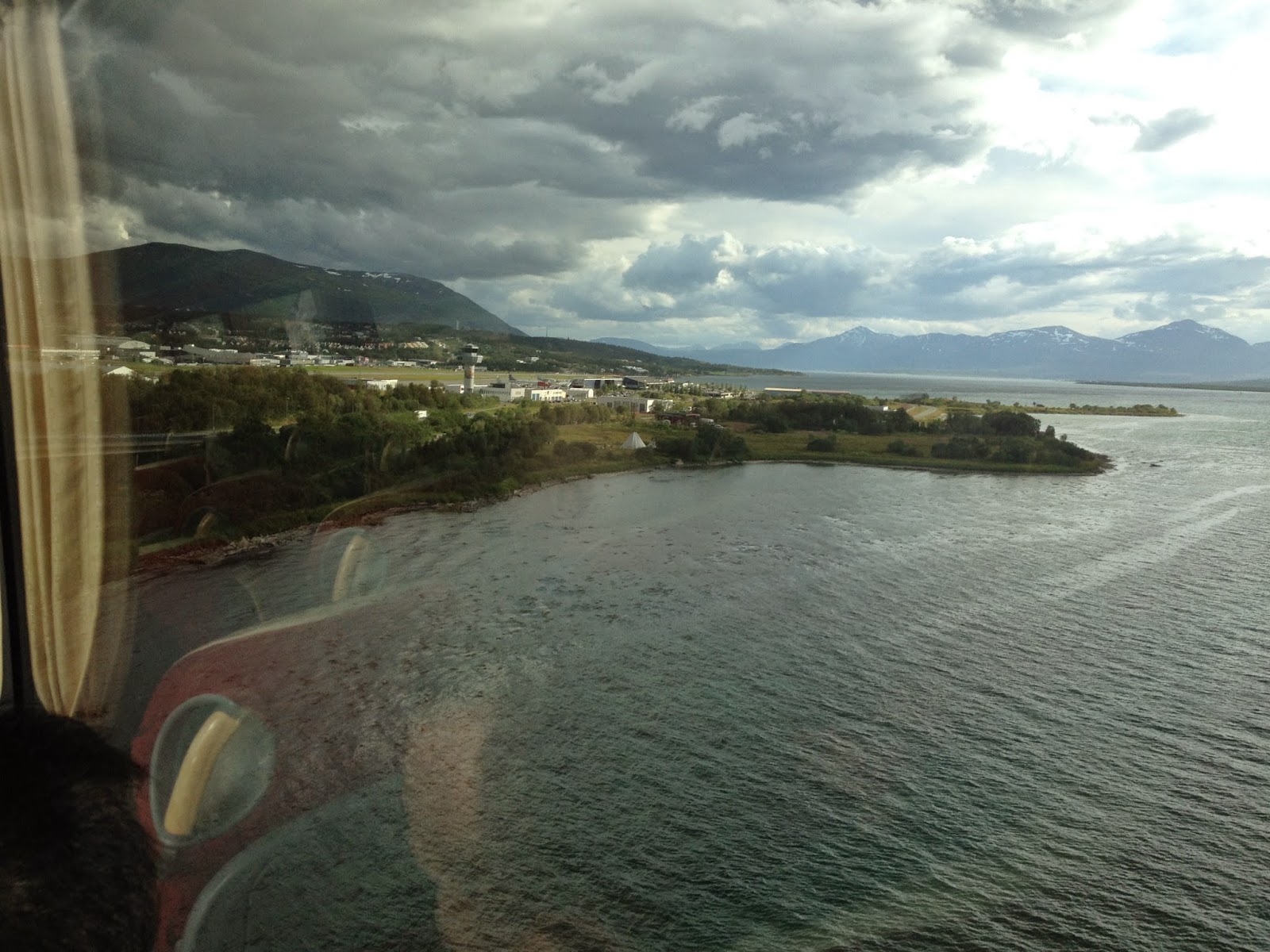 From the bridge, you can get a good view of the airport 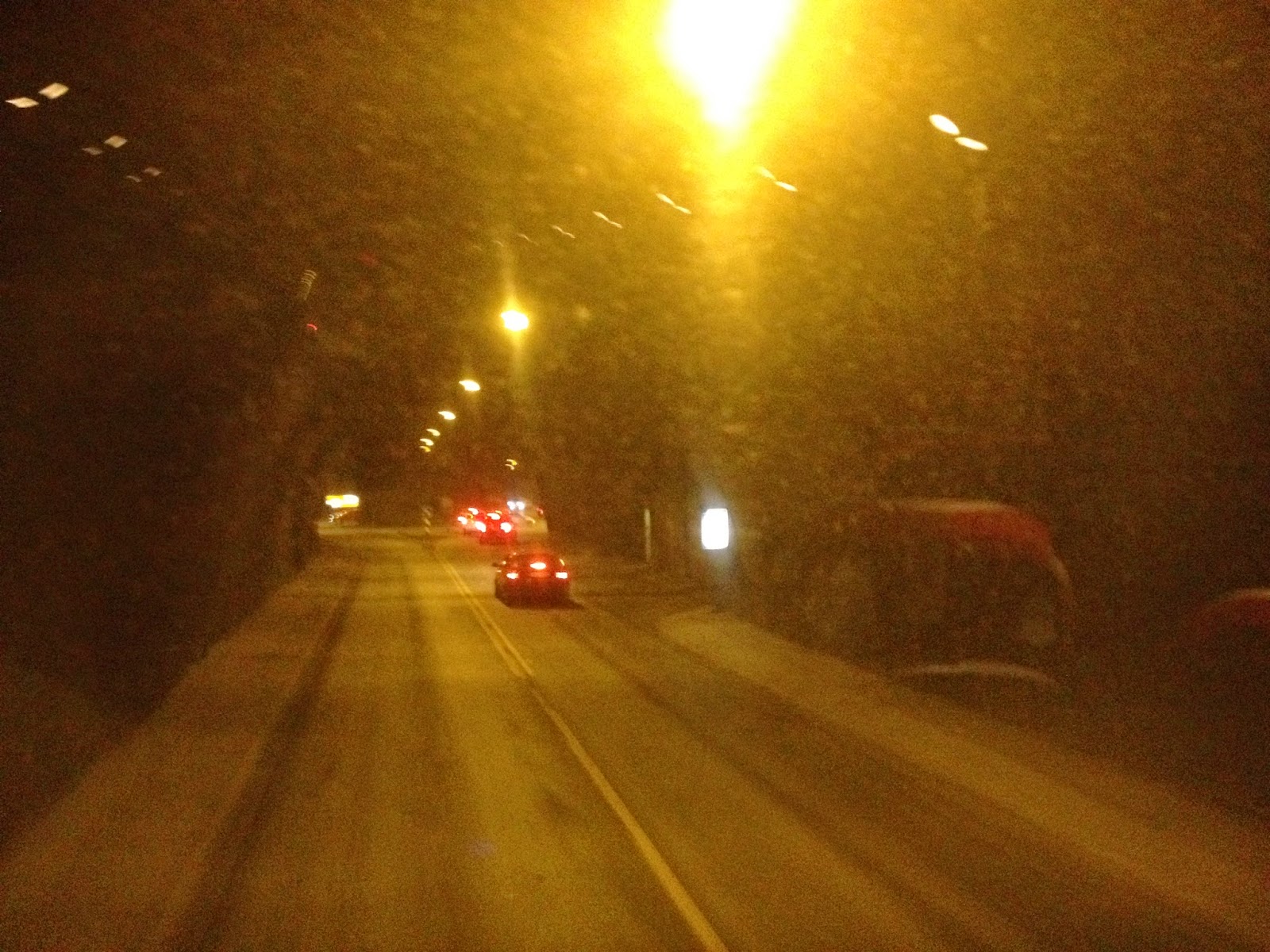 There's quite a large section of the trip that is underground & yes, the roads are two way 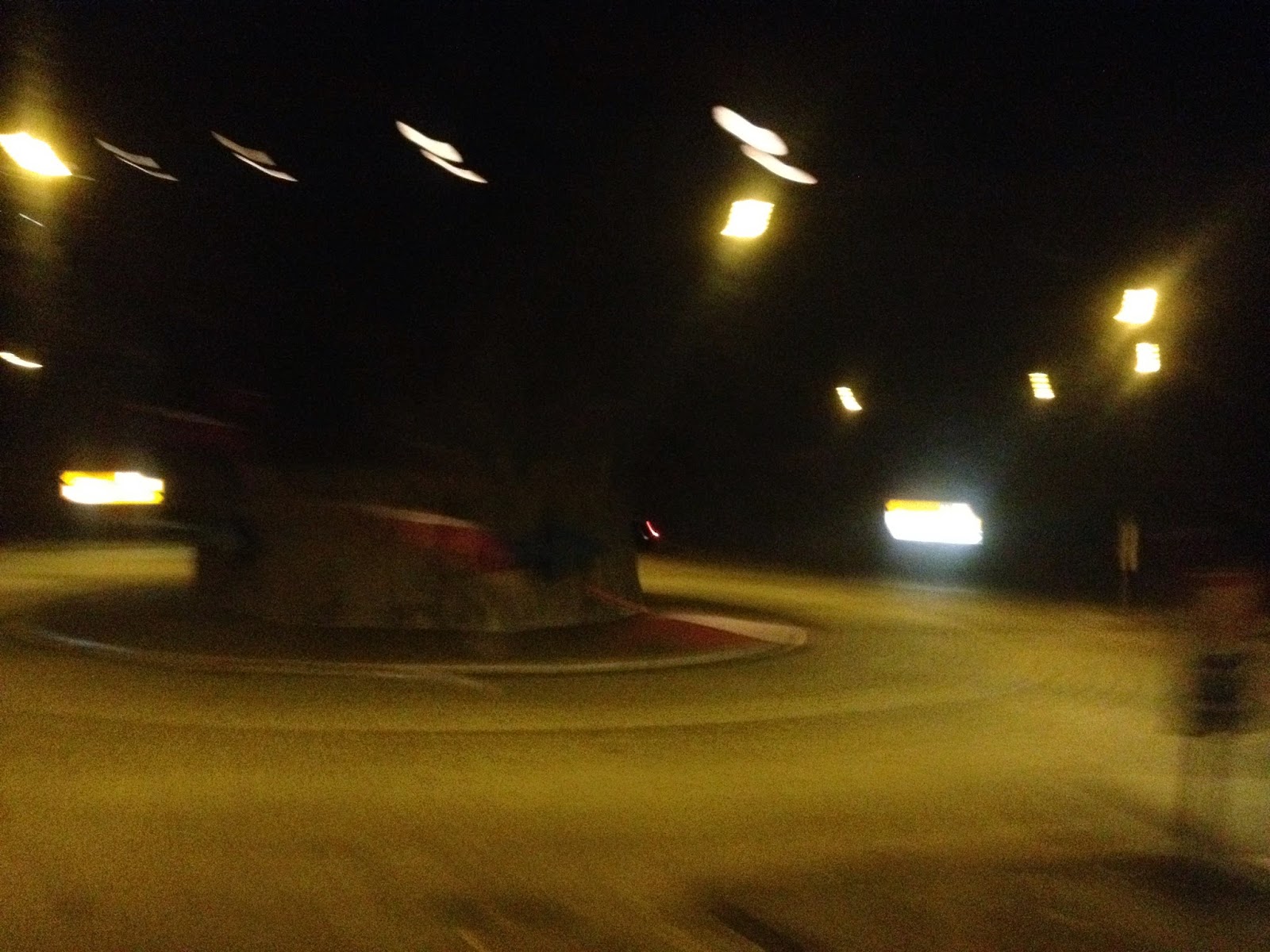 As part of this maze of underground roads, we find what I like to call an 'Undergroundabout' - a roundabout underneath the ground! 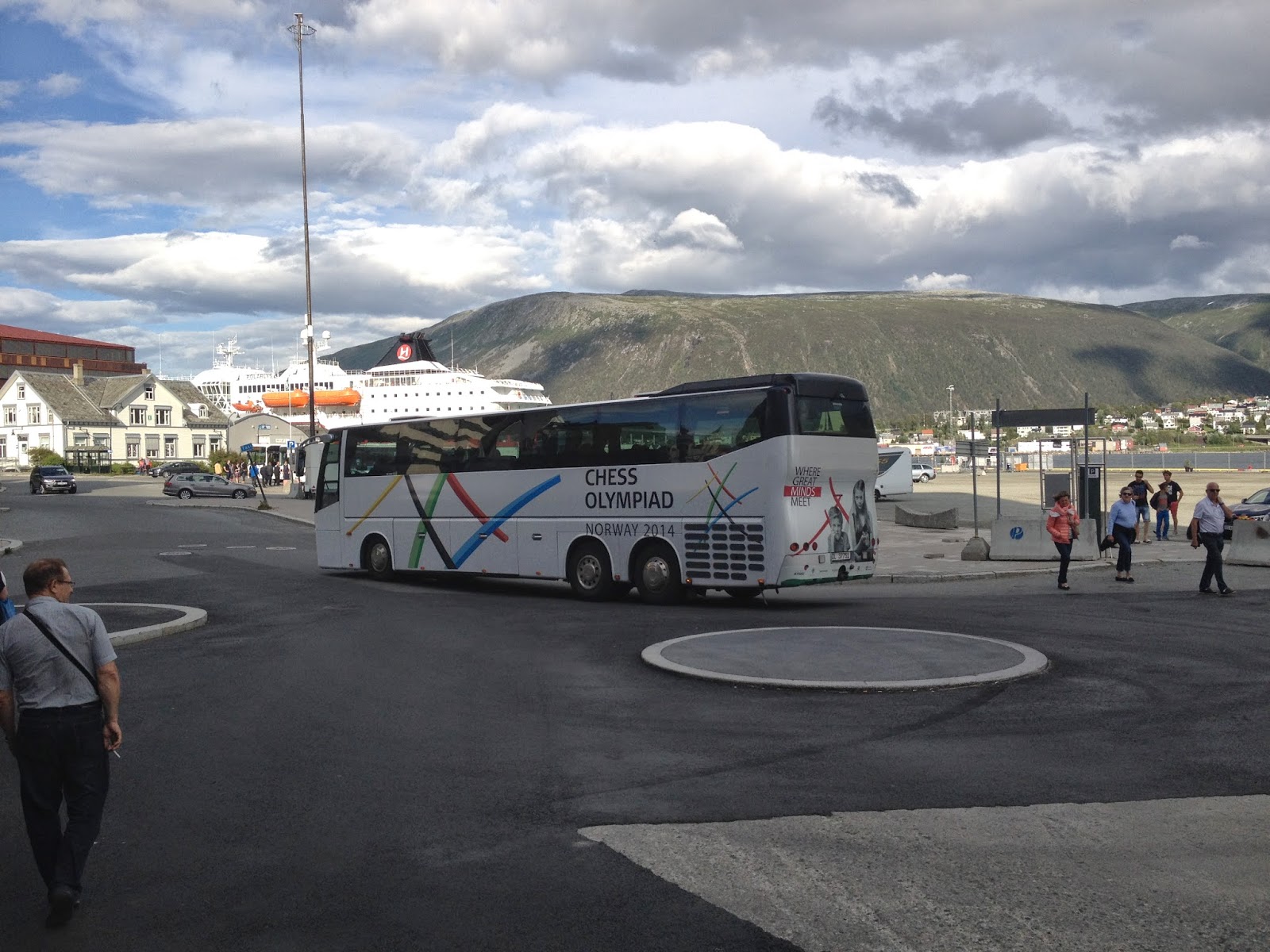 One of the buses decorated in official Olympiad colours & logo 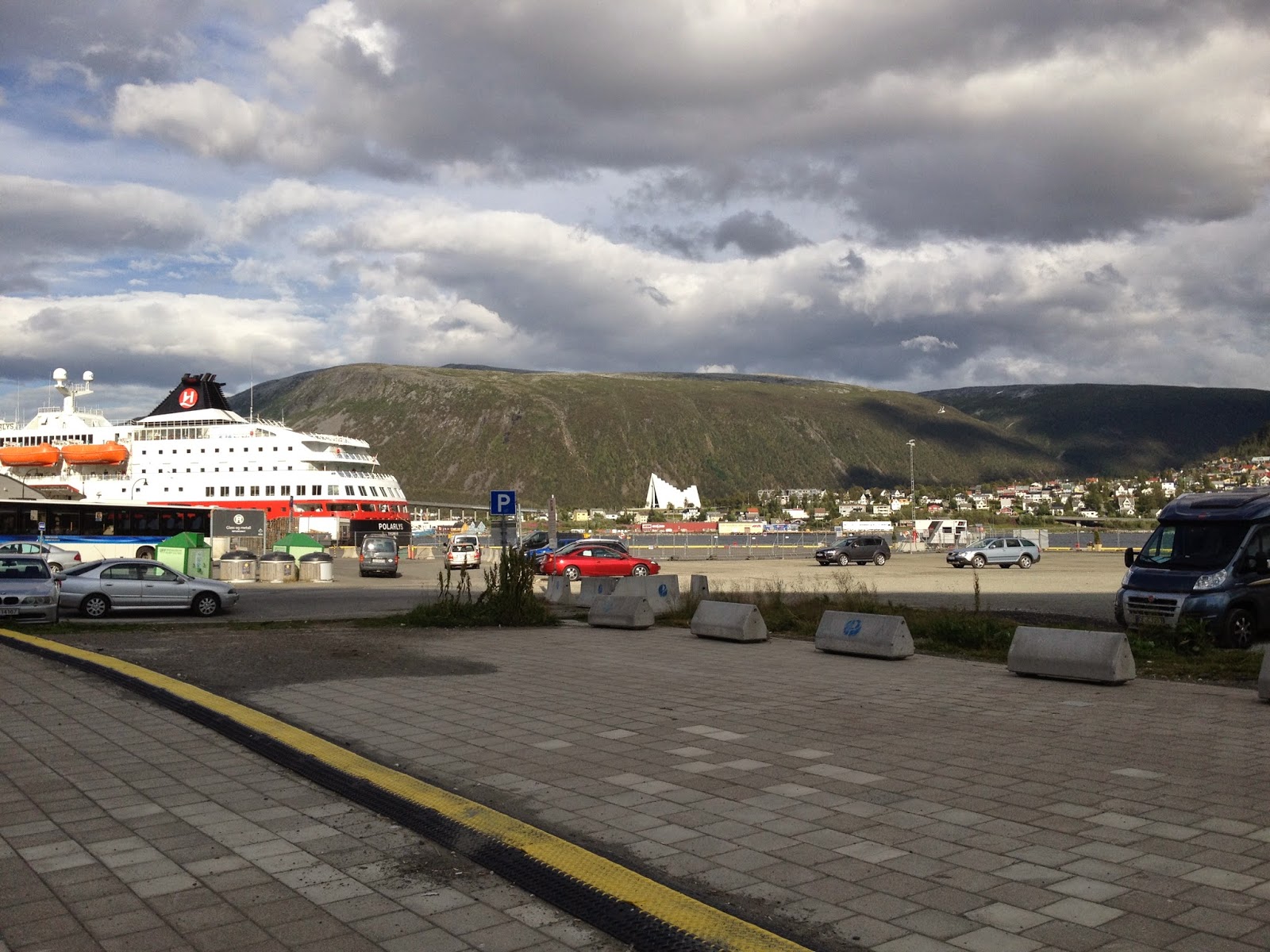 A view across to a rather unique looking church - fascinating for the hidden architect within!

Anyway, we eventually arrived at Tromso & headed to the Edge for an early dinner (scheduled early because of the opening ceremony later that night). Of course I had not taken notice of the time of the ceremony, only that buses would start leaving at 5:15pm. After meeting a few more familiar faces at dinner, I quickly headed to the bus stop & was soon whisked away to another part of Tromso, the Skarphallen, for the Opening Ceremony. Given that it was not due to start until 7:30pm, I found myself one one of the first there, so found a seat, took a few photos & returned to the book that I had been reading earlier in the day. As the crowd filled, I spotted fellow Aussies Manuel Weeks (Open team captain) & Giang Nguyen (Womens board 2) looking for a seat & got their attention (I had a few spare seats near me), so we had a quick catch-up on recent events in out lives before the ceremony began. Below are a few photos that I took: 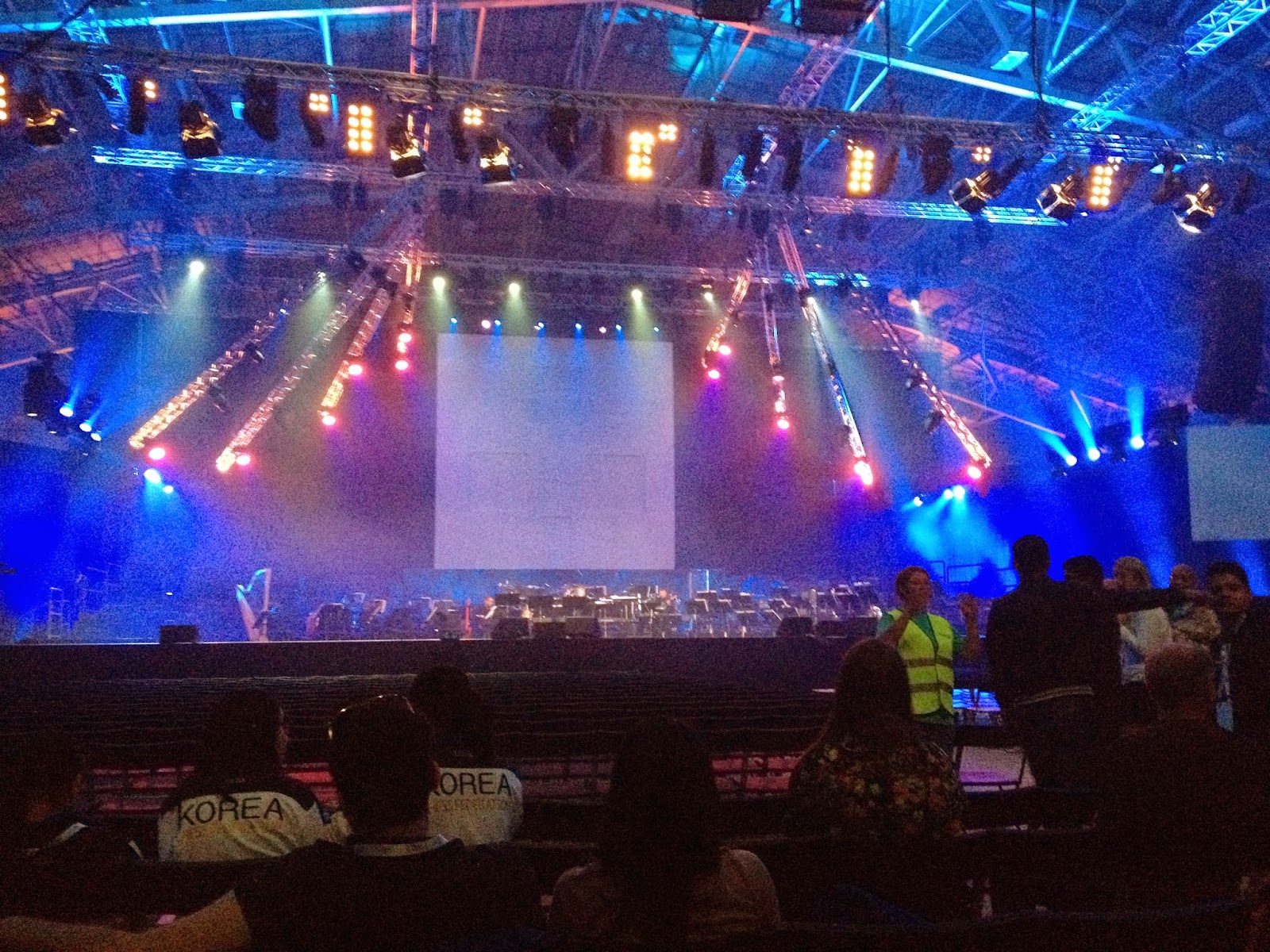 The calm before the storm when the hall was mostly empty 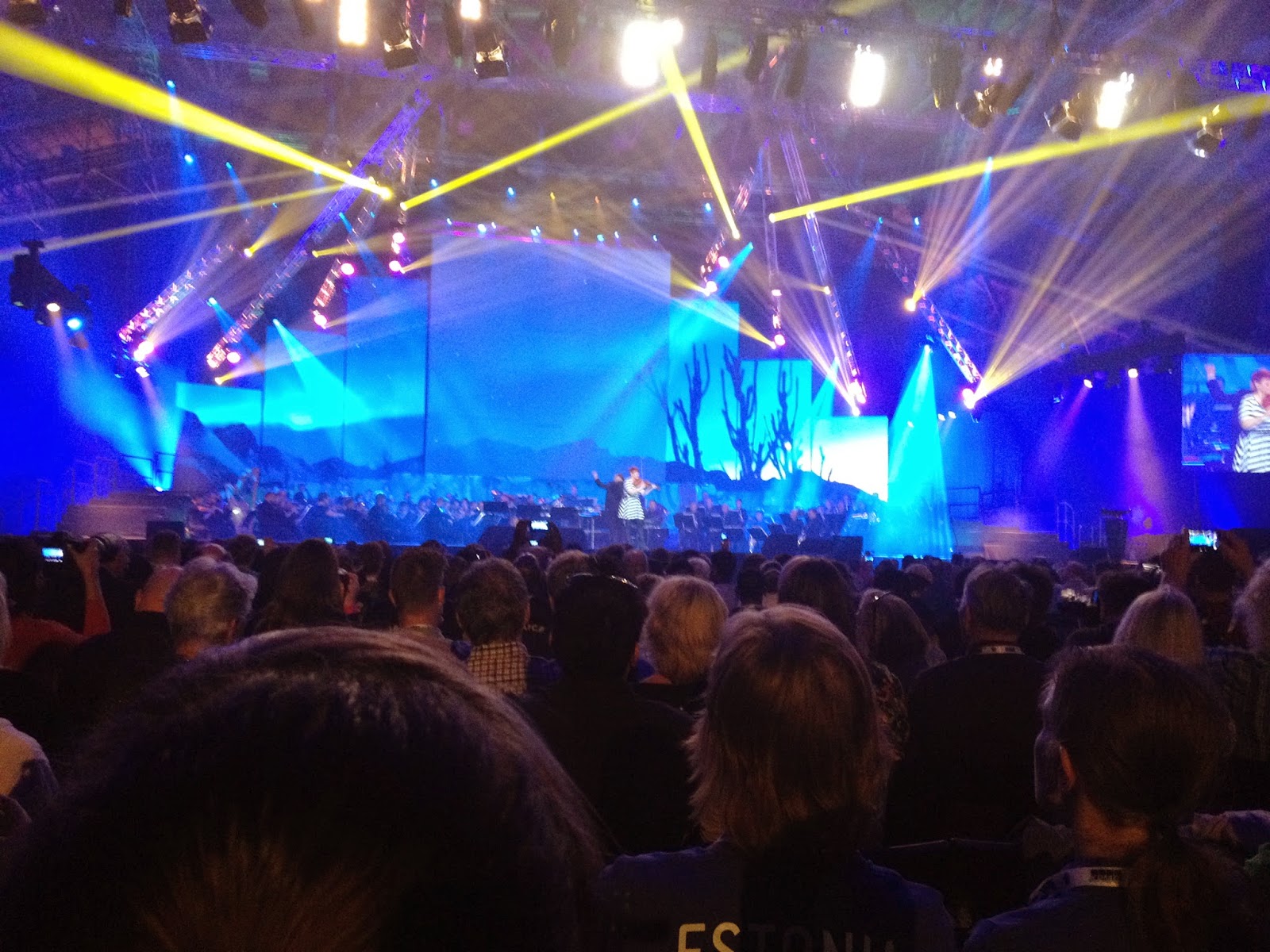 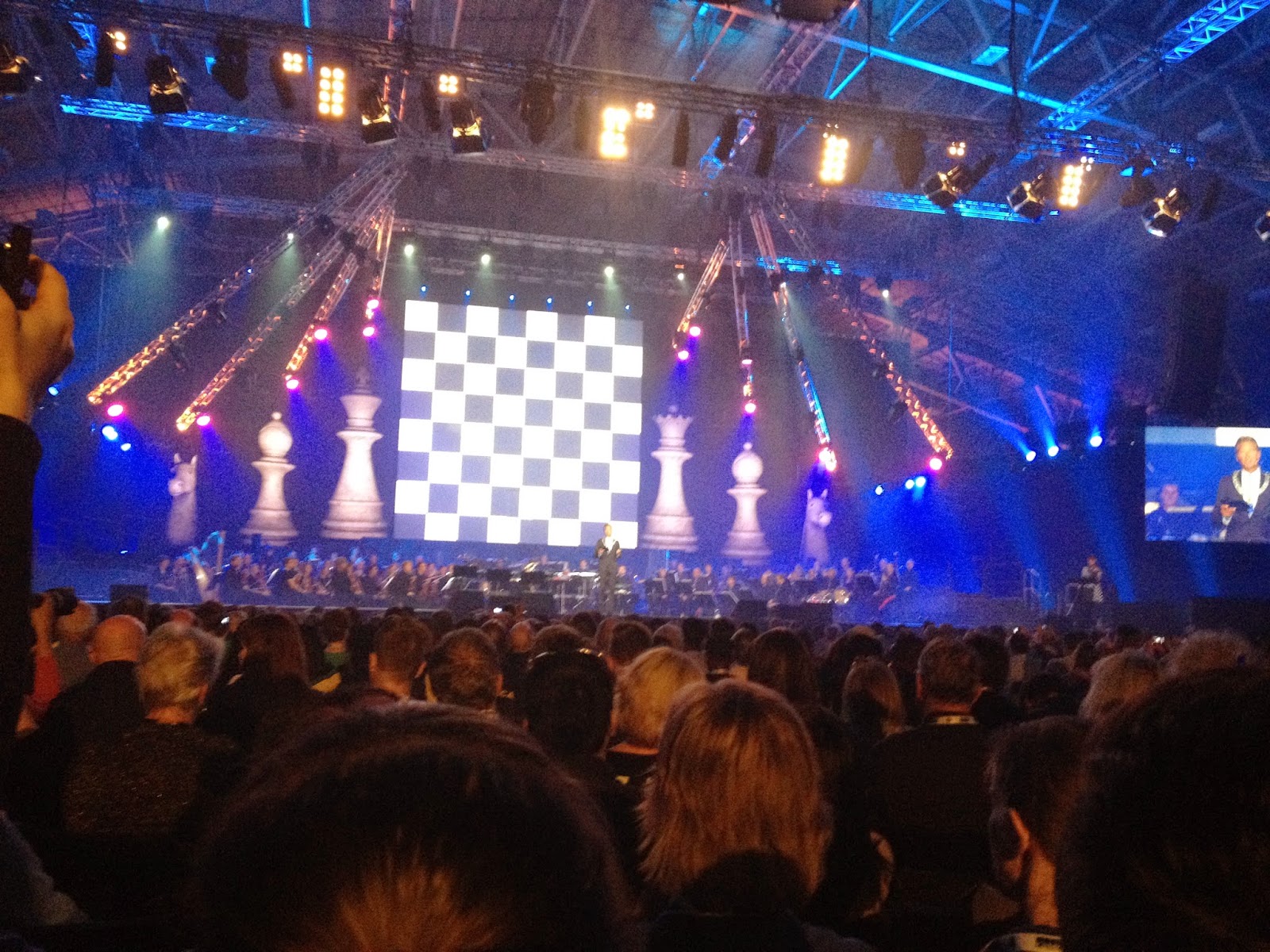 The Mayor of Tromso, Jens Johan Hjort, was the host for the event 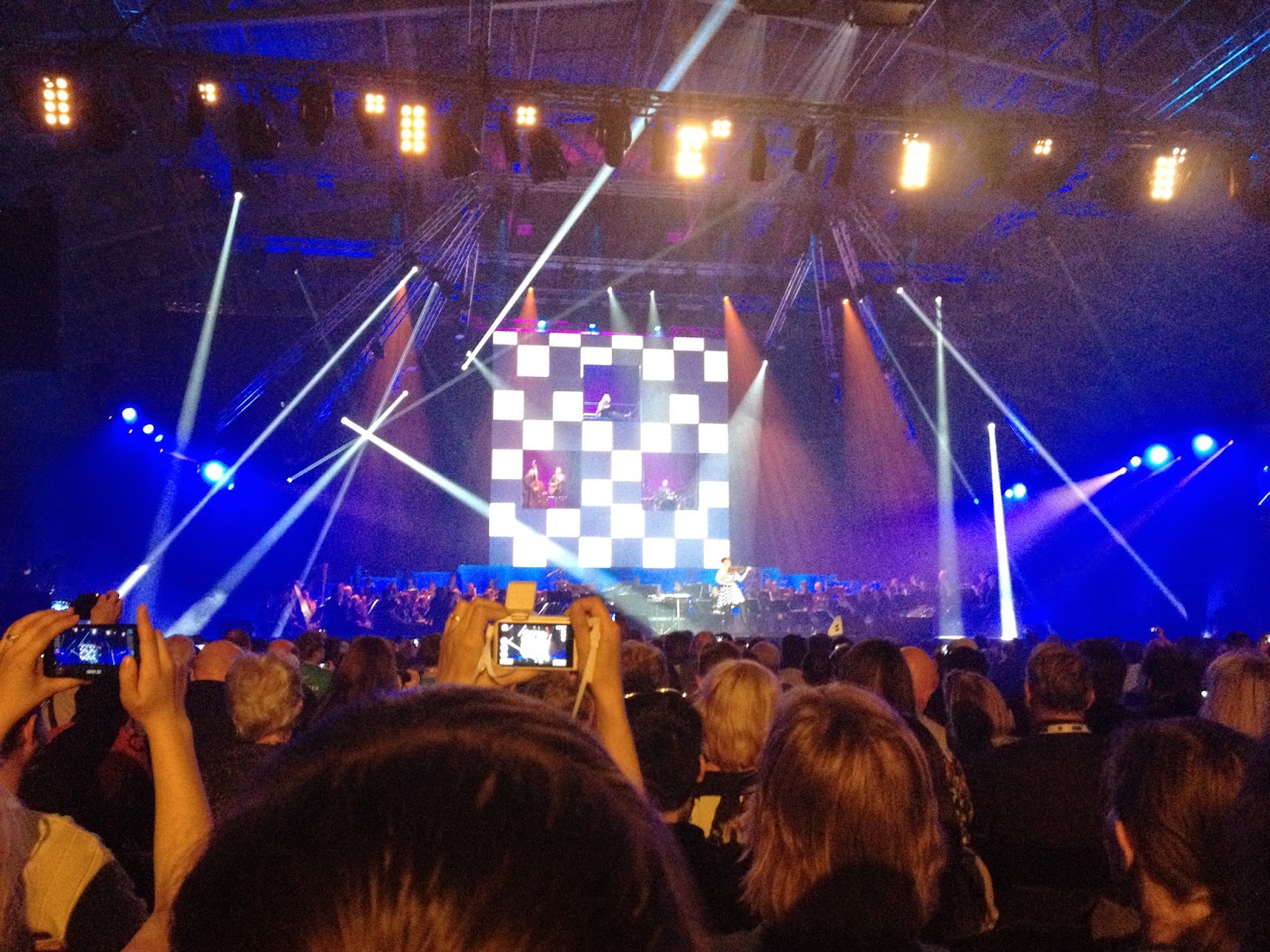 Hekla Stålstrenga returned with a backing band in the stage set 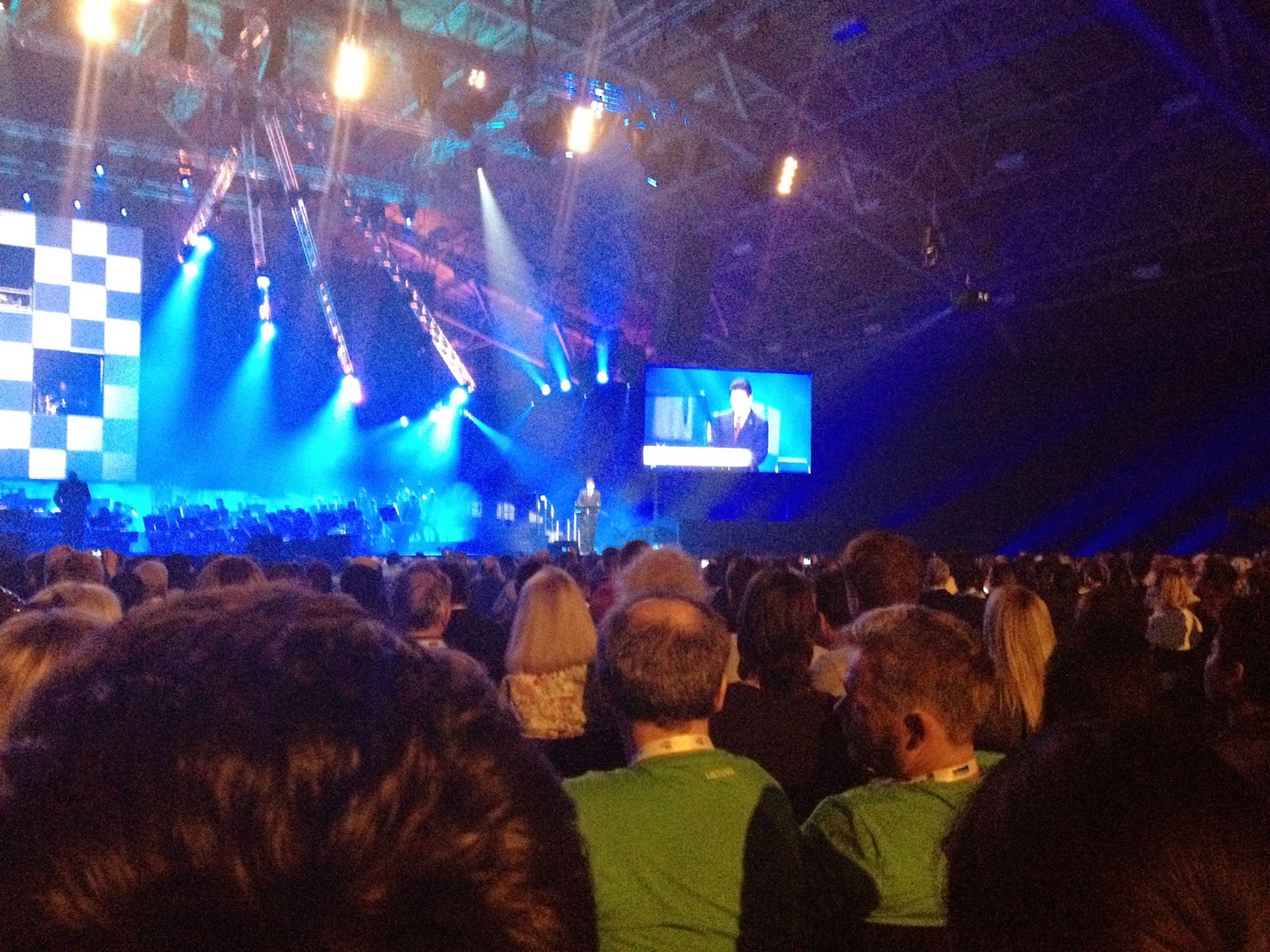 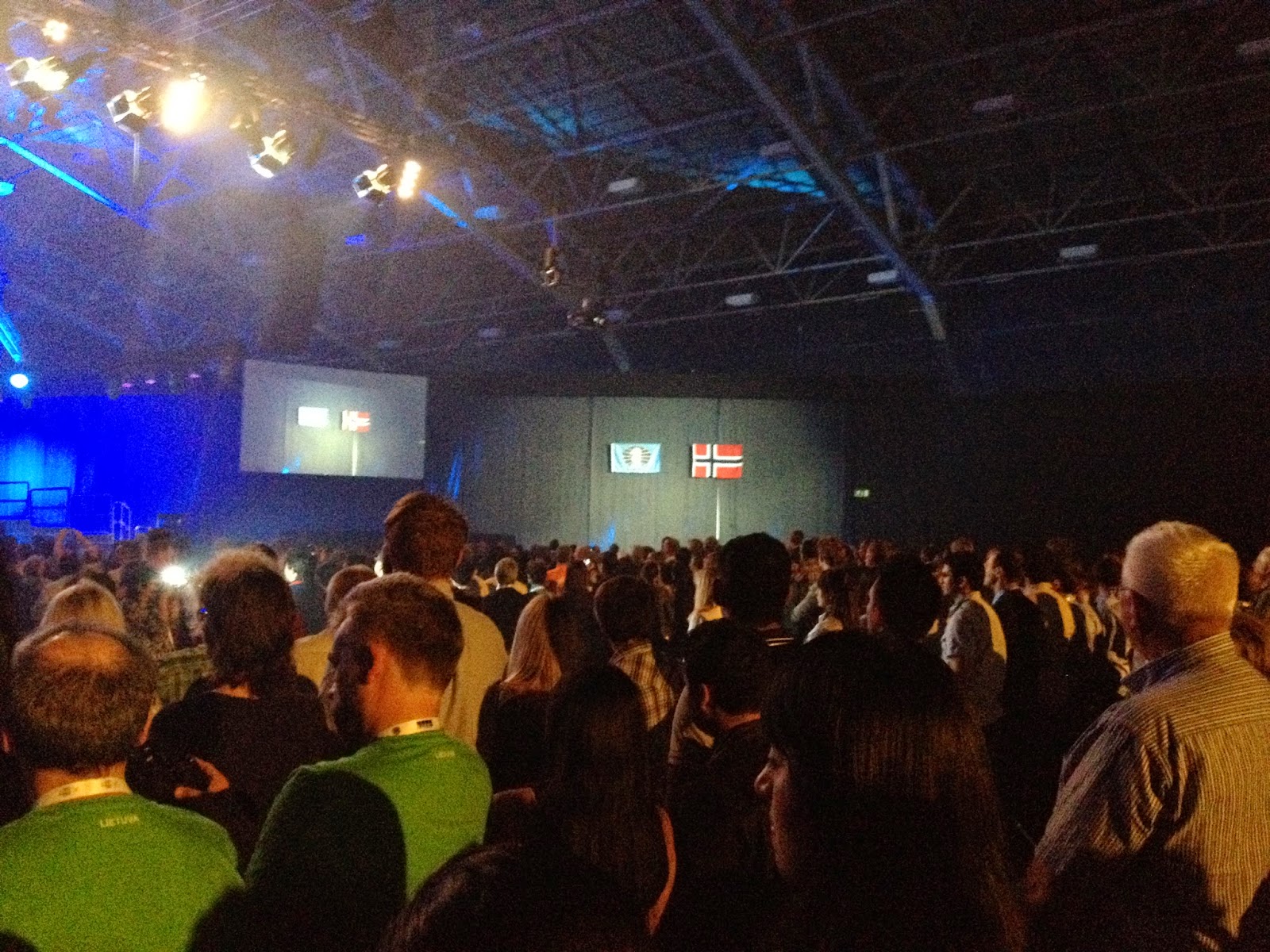 The (somewhat small) flags of FIDE & Norway were raised 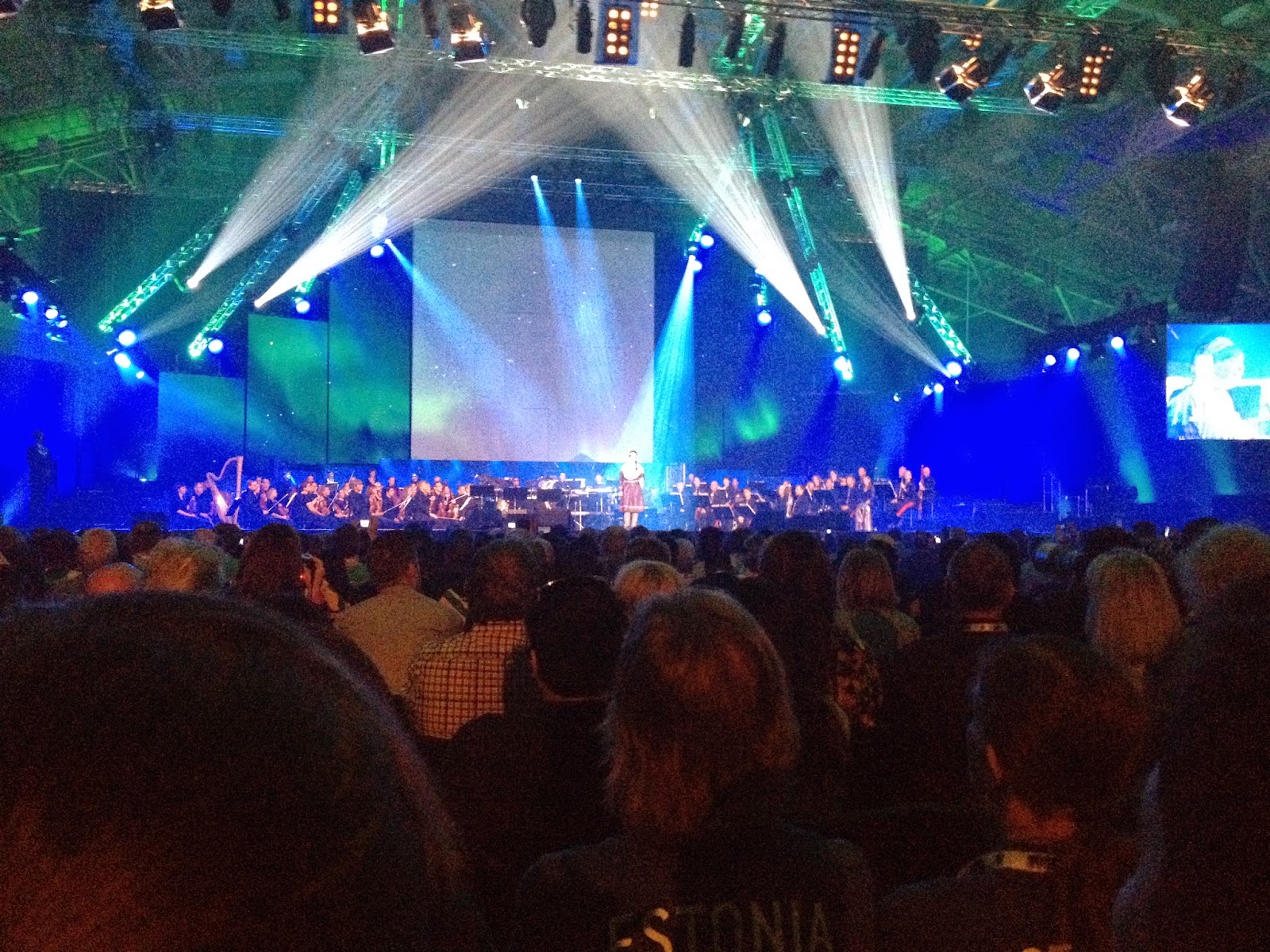 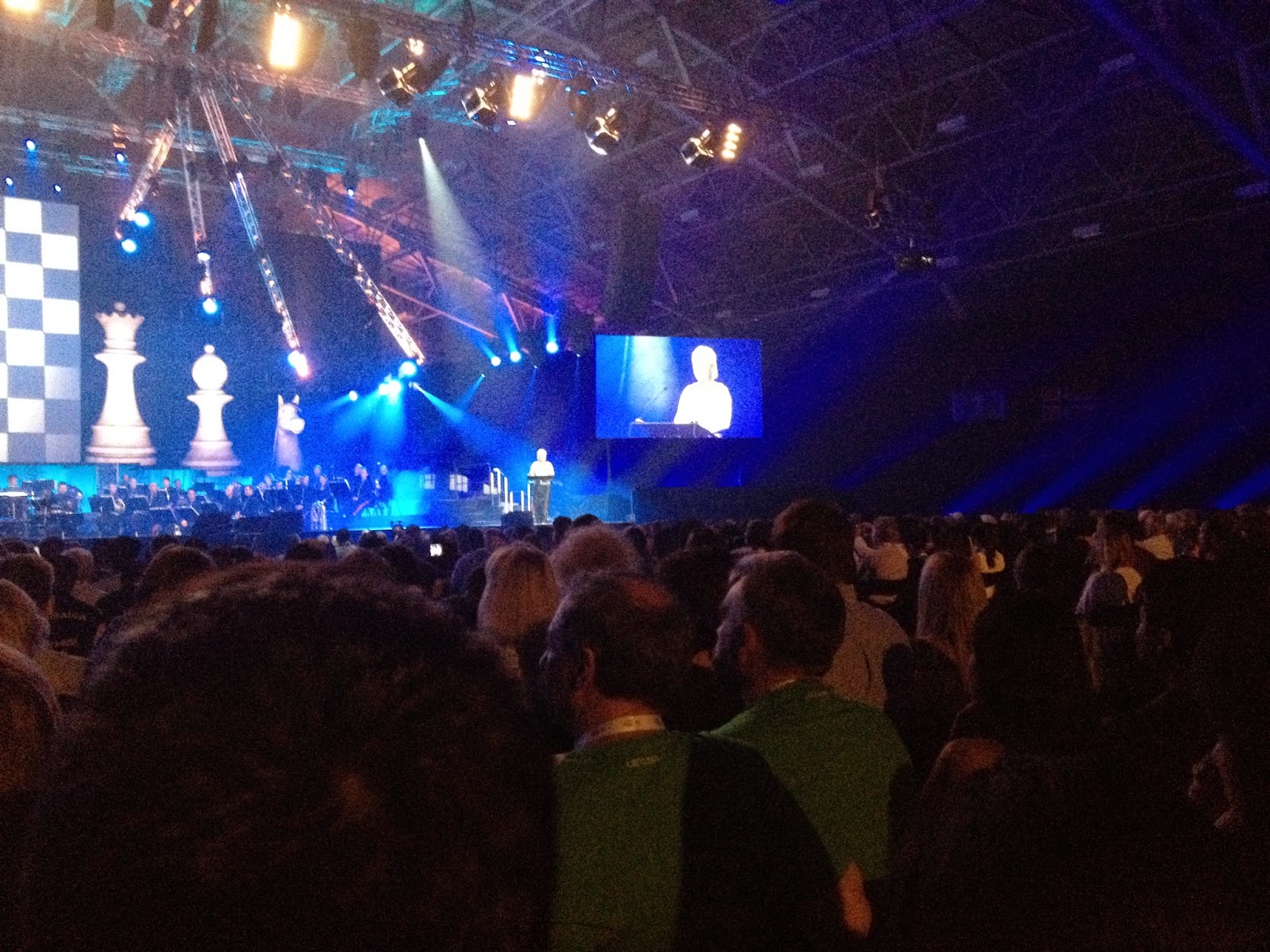 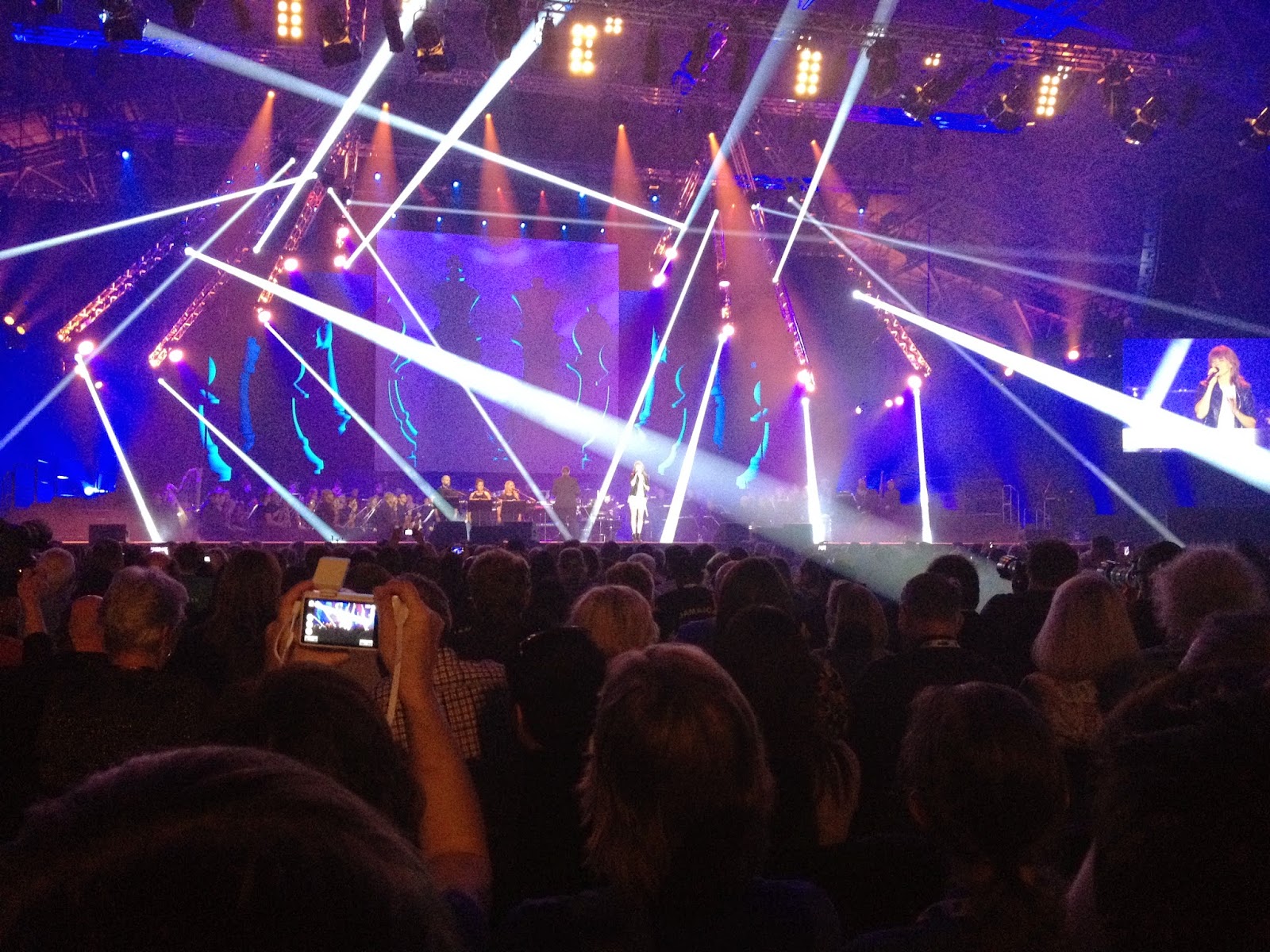 Lisa Stokke sang a song from Chess: the Musical, which is to be performed in Tromso while the Olympiad is on 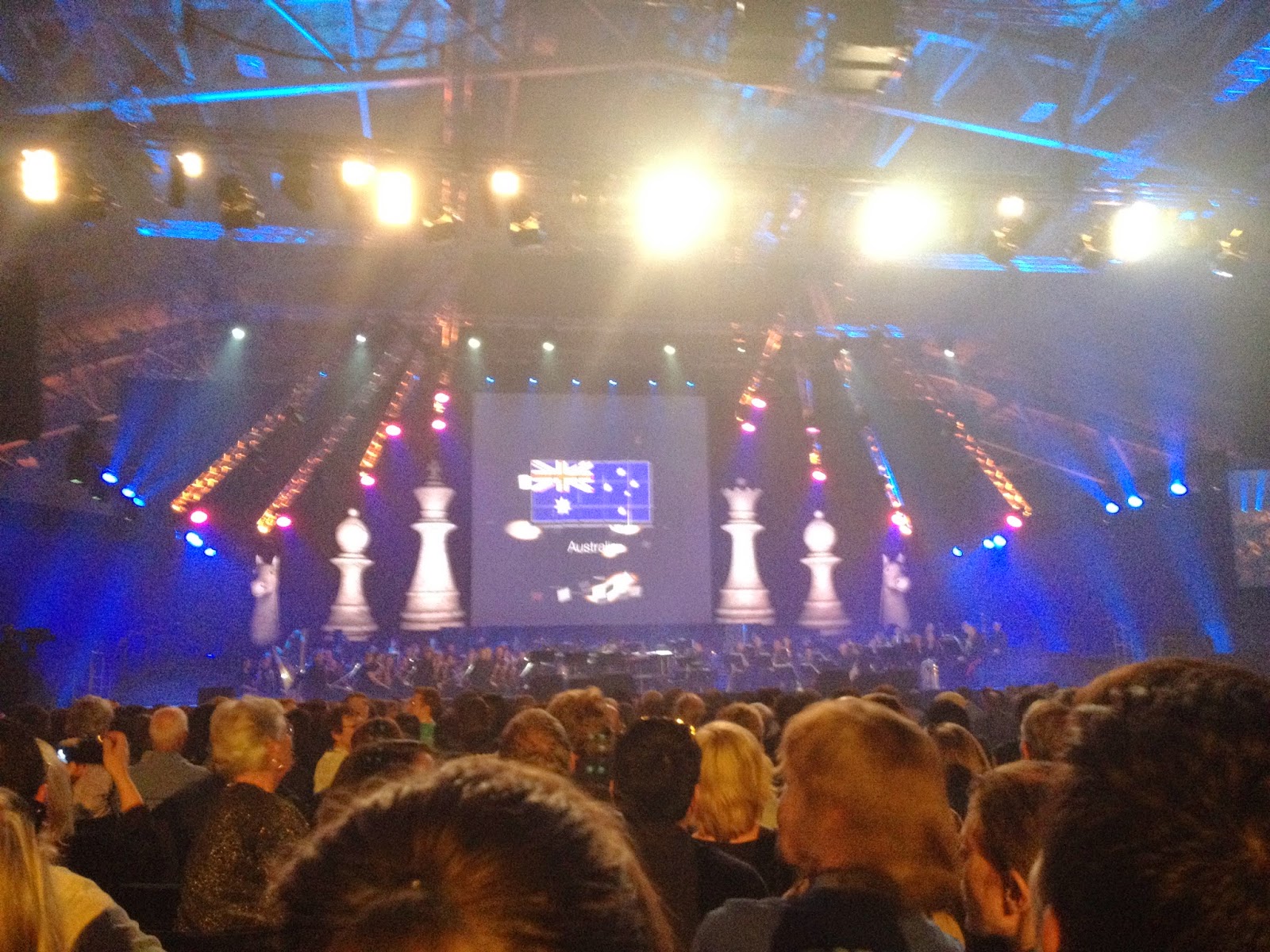 Countries were announced, with their national flags displayed on the big screen - here is Australia! Some countries stood up & cheered when their flag was displayed & their country announced - for me the best of these was the Jamaican team, who all rose & took up the Usain Bolt 'Lightning Bolt' pose 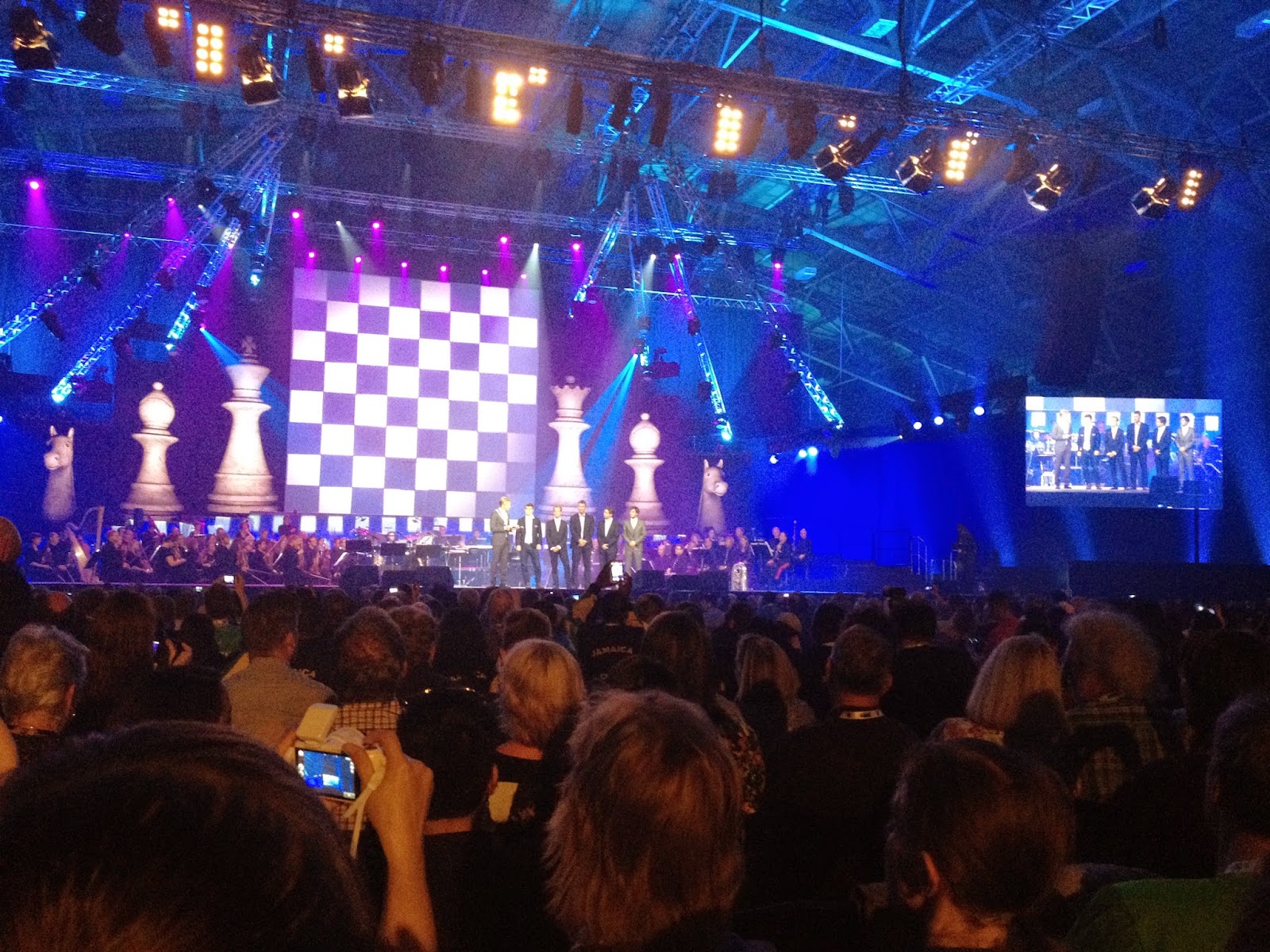 Magnus Carlsen & the Norwegian team are introduced to the crowd 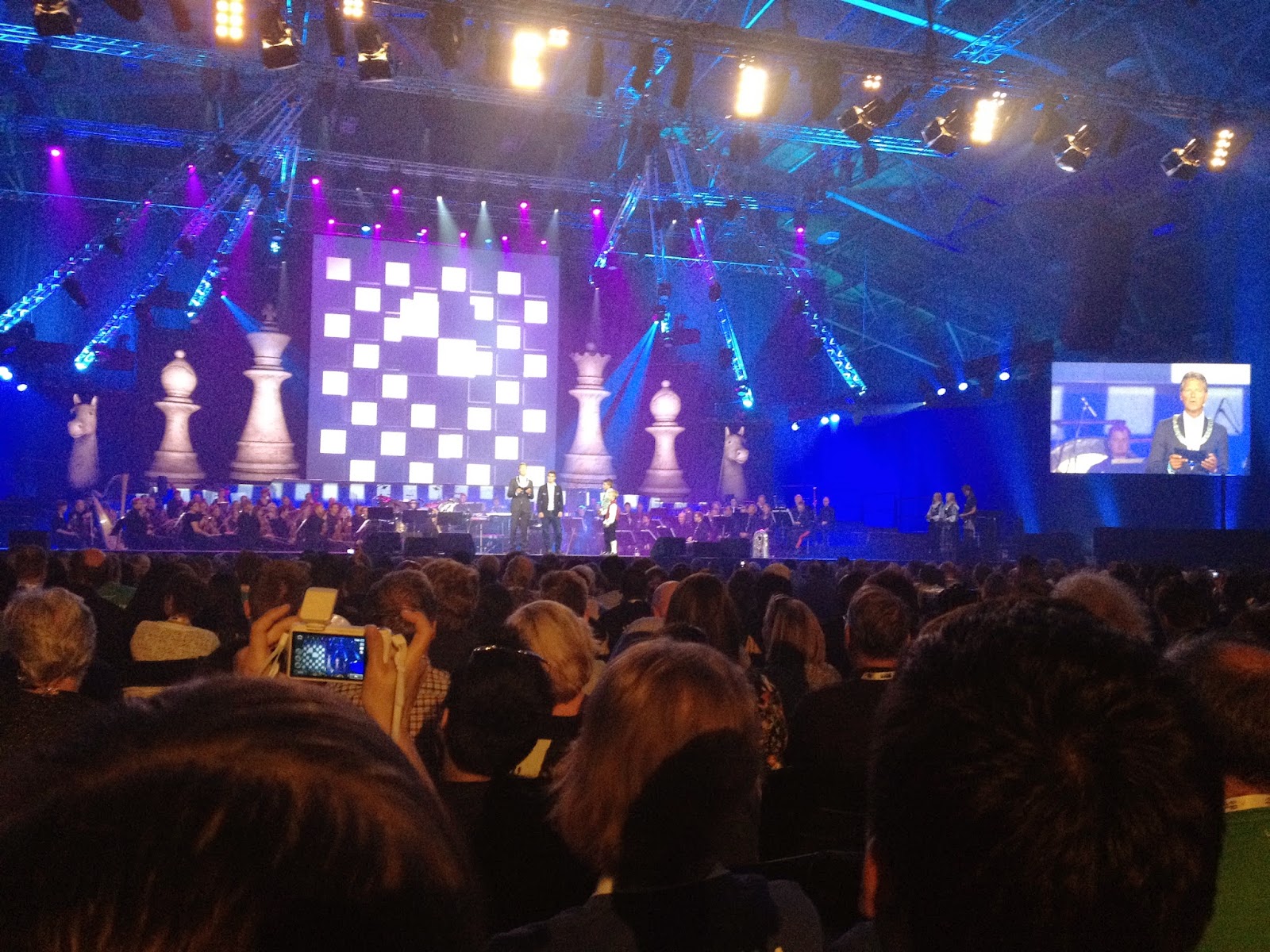 Carlsen drawing colours for the top teams in each event (both times he chose black!) 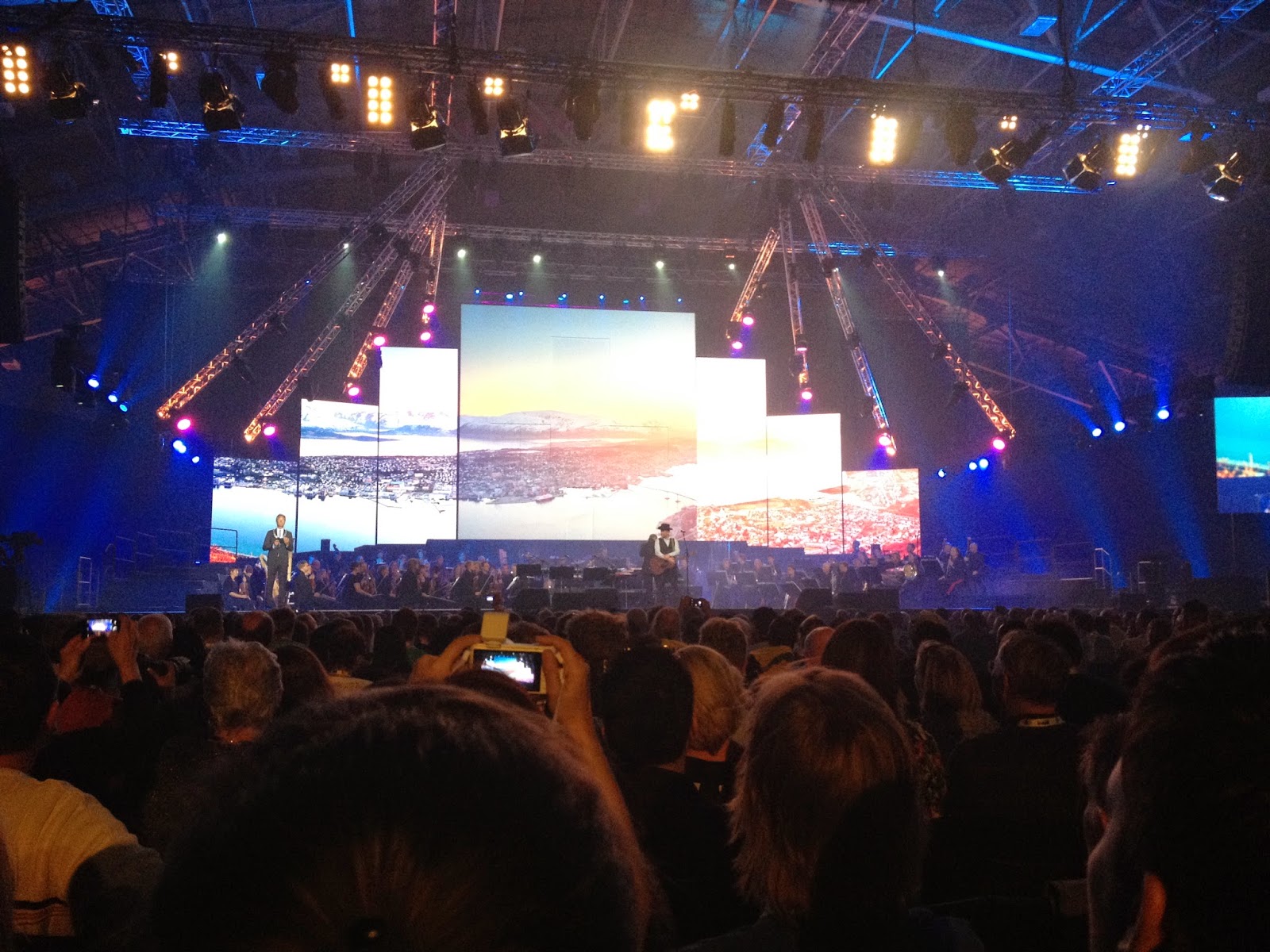 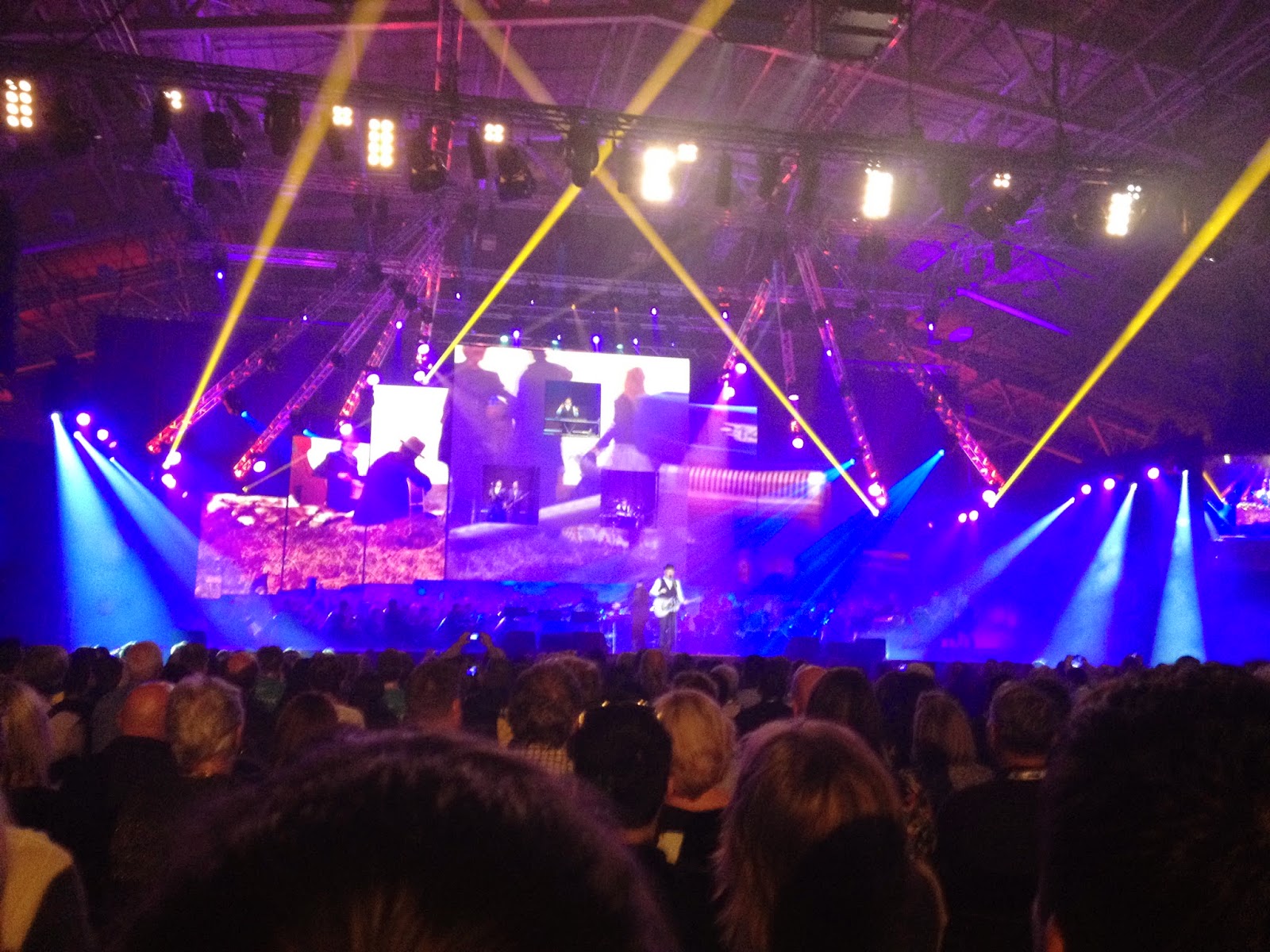 ﻿
The band members appeared in set cutouts
This interesting video was also shown early in the ceremony, featuring some of the world's top players alongside chess players & fans from around the world
This is the video of the song played by Violet Road at the opening ceremony - a reasonably catchy tune!
You can also read other reports about the ceremony on Chessbase or Chess24.
After the ceremony, the arbiters headed to the playing arena for the Arbiter's meeting, chaired by Chief Arbiter Takis Nikolopoulos. Although it was to some degree informative, it dragged on for far too long (longer than the entire opening ceremony, which was finished within an hour!), meaning that by the time the buses arrived to take us back to our accommodation it was after 1am!
Visiting the playing hall allowed me to take a few photos (which may not be so easy to get in coming rounds with the ban on phones & electronic devices in the playing hall), as well as finding out that I will be arbiting in section 5 of the playing hall. I'll find out exactly which match (or matches) I am looking after in the morning.
I'll finish with some photos of the playing hall & arbiter's meeting: 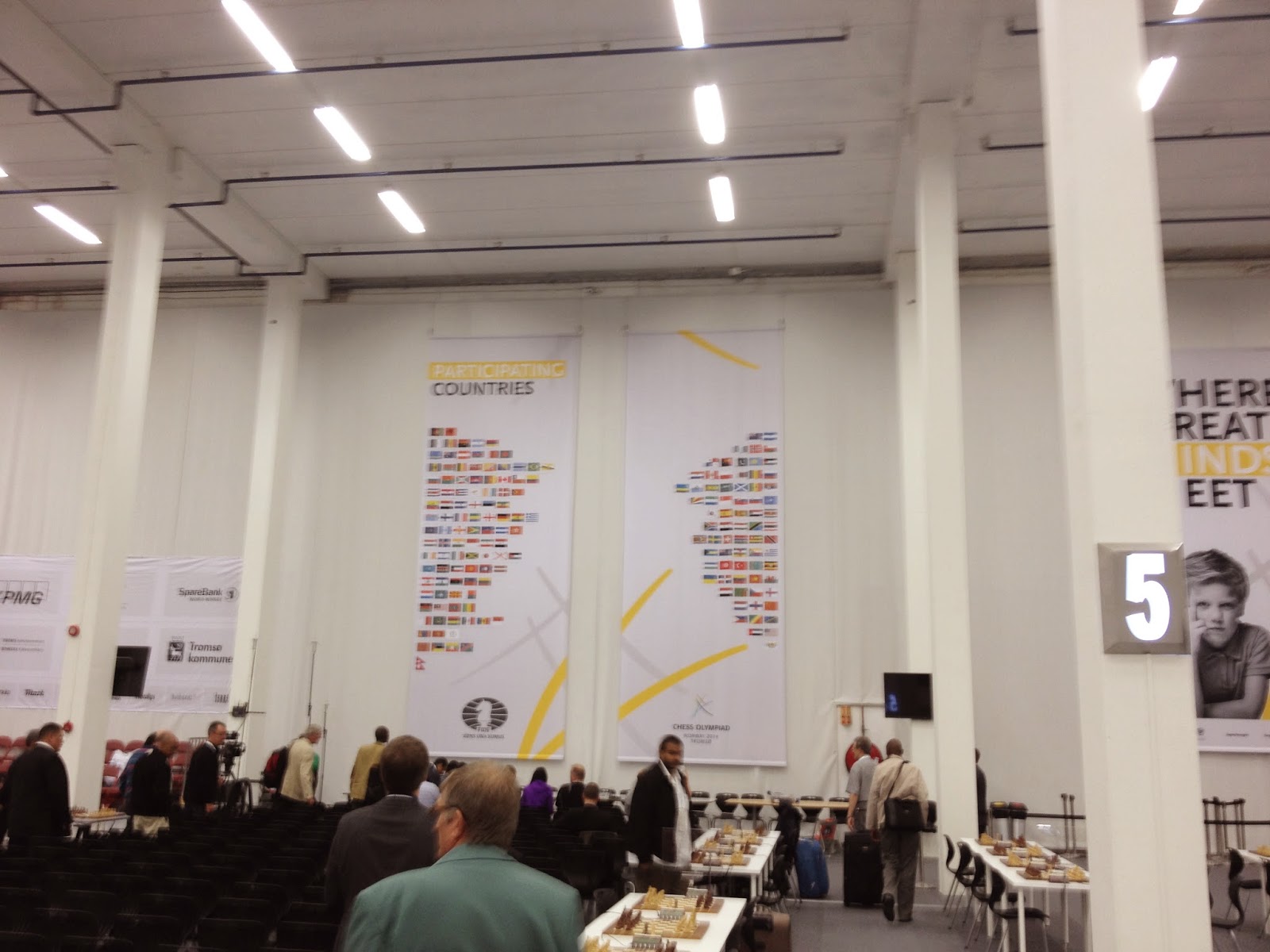 Flags of the competing countries on the wall 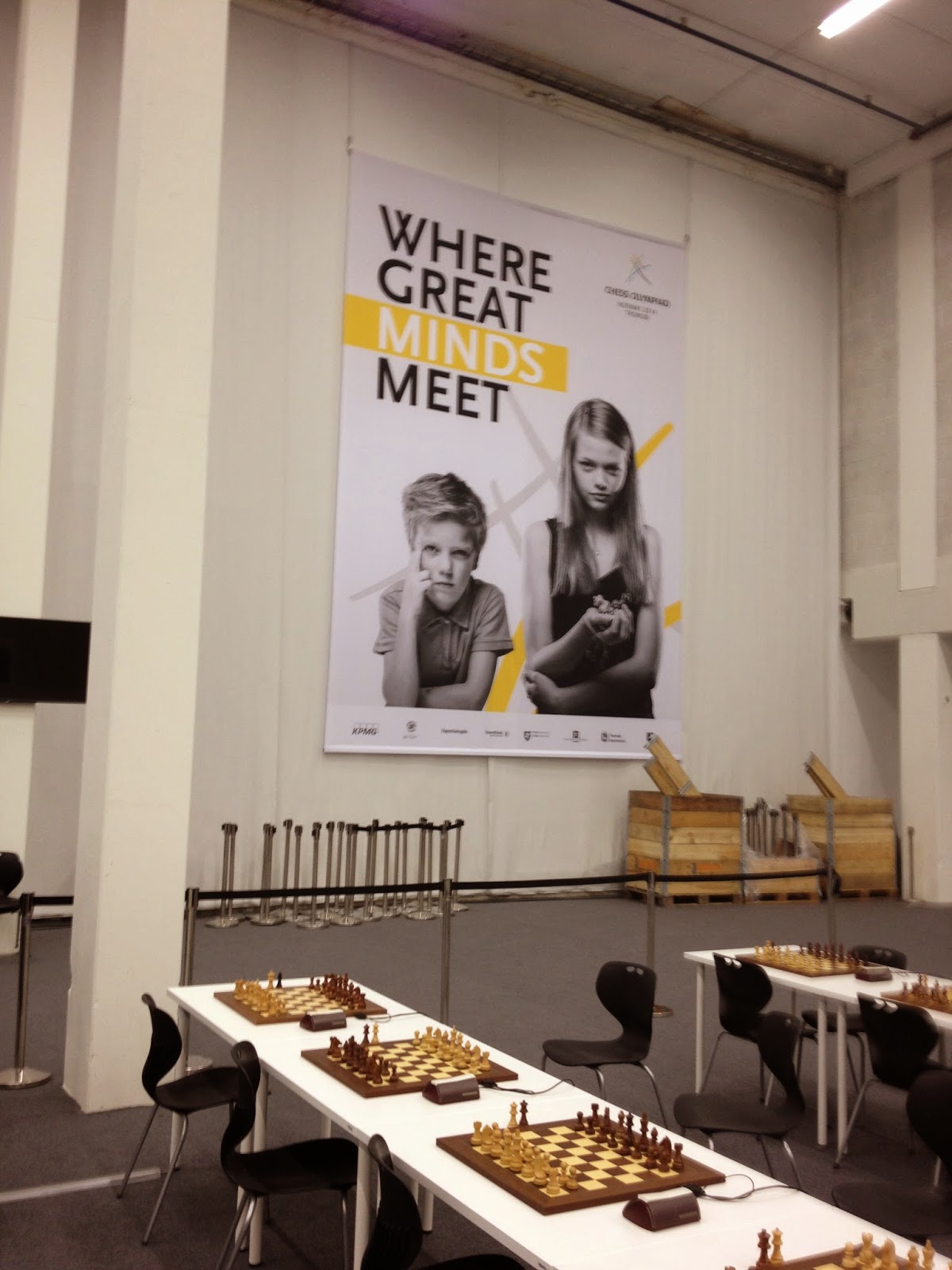 Promotional poster on the walls of the main playing hall 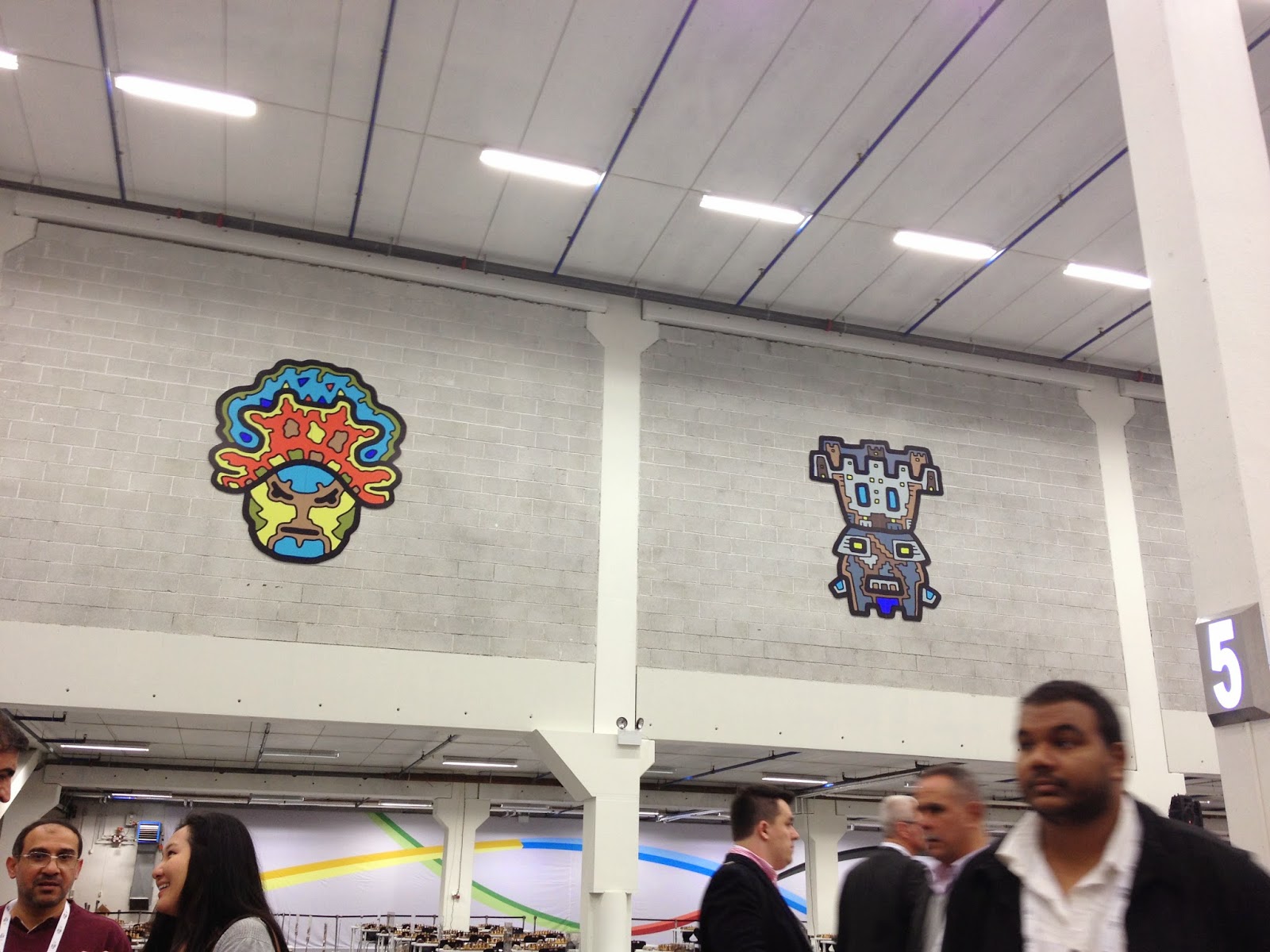 Some of the artwork by official Olympiad artist Chris Reddy 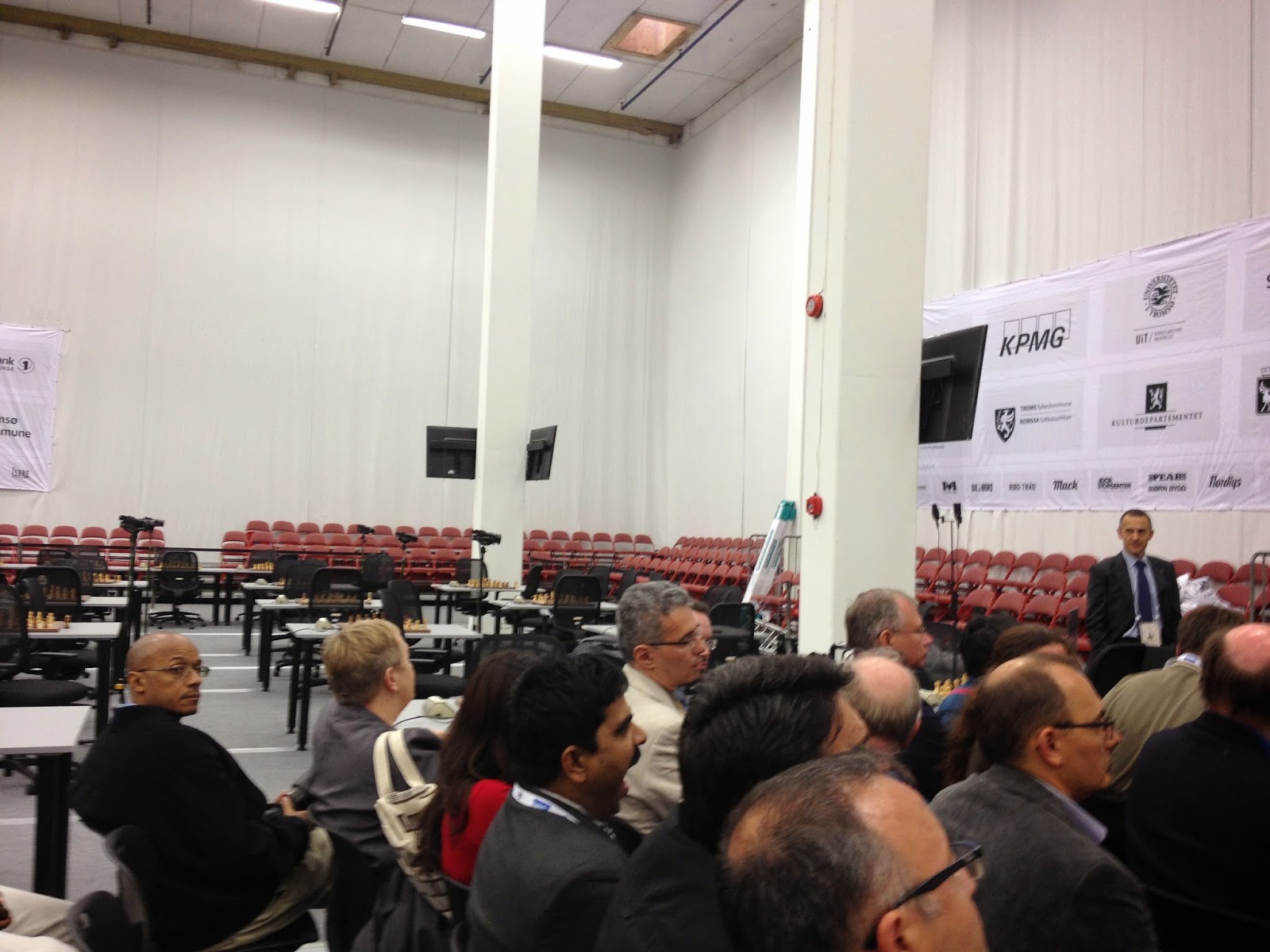 The arbiter's meeting was held directly next to the top boards. You will see that each board has its own video camera - apparently the local TV station NRK plans to broadcast around 70 hours of live chess on local TV during the Olympiad! 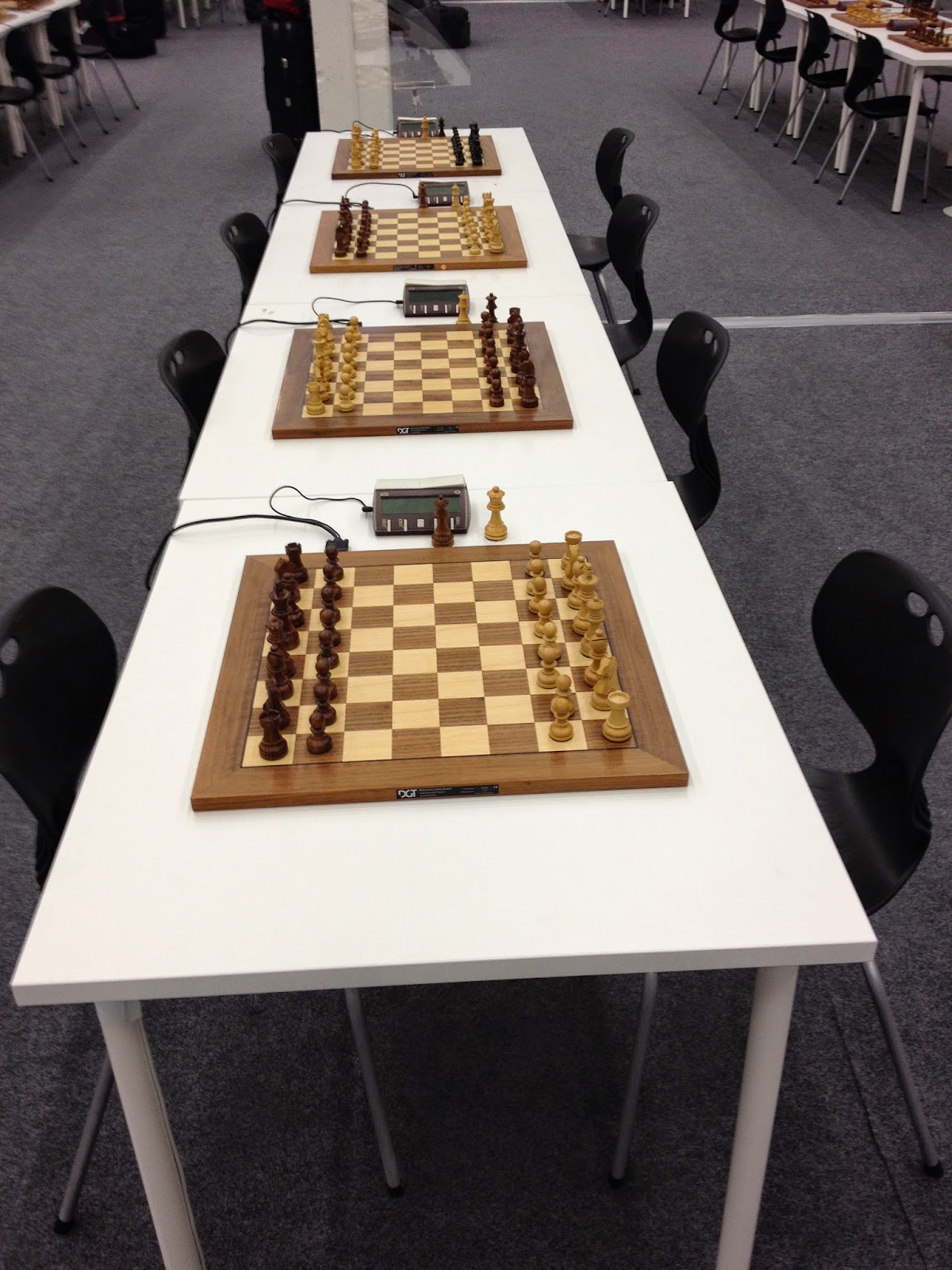 A typical setup for each match, with four tables for the games & a board at the end of the row, which will display details of teams & results, updated during the round.
In terms of the chess, Australia finds itself in the top half of the pairings, so in theory has an easy game tomorrow (although arguably no games are easy at an event like this). The Open team are playing the US Virgin Isles on table 59, while the Womens team face Kenya of table 51. All the best to both teams!
﻿
Posted by MelbourneGamesCoach at 19:17