Yesterday (yes, this post is being written 'the day after') was a bit of a busy day for me - and there's even a chance that I was doing my best serious arbiter impersonation on Norwegian TV ... because the match I was supervising today was between Slovenia & Norway 2, so quite a bit of interest from spectators at the venue, as well as having a cameraman watching the game at various times (and presumably showing some of the footage on the TV coverage of the event). 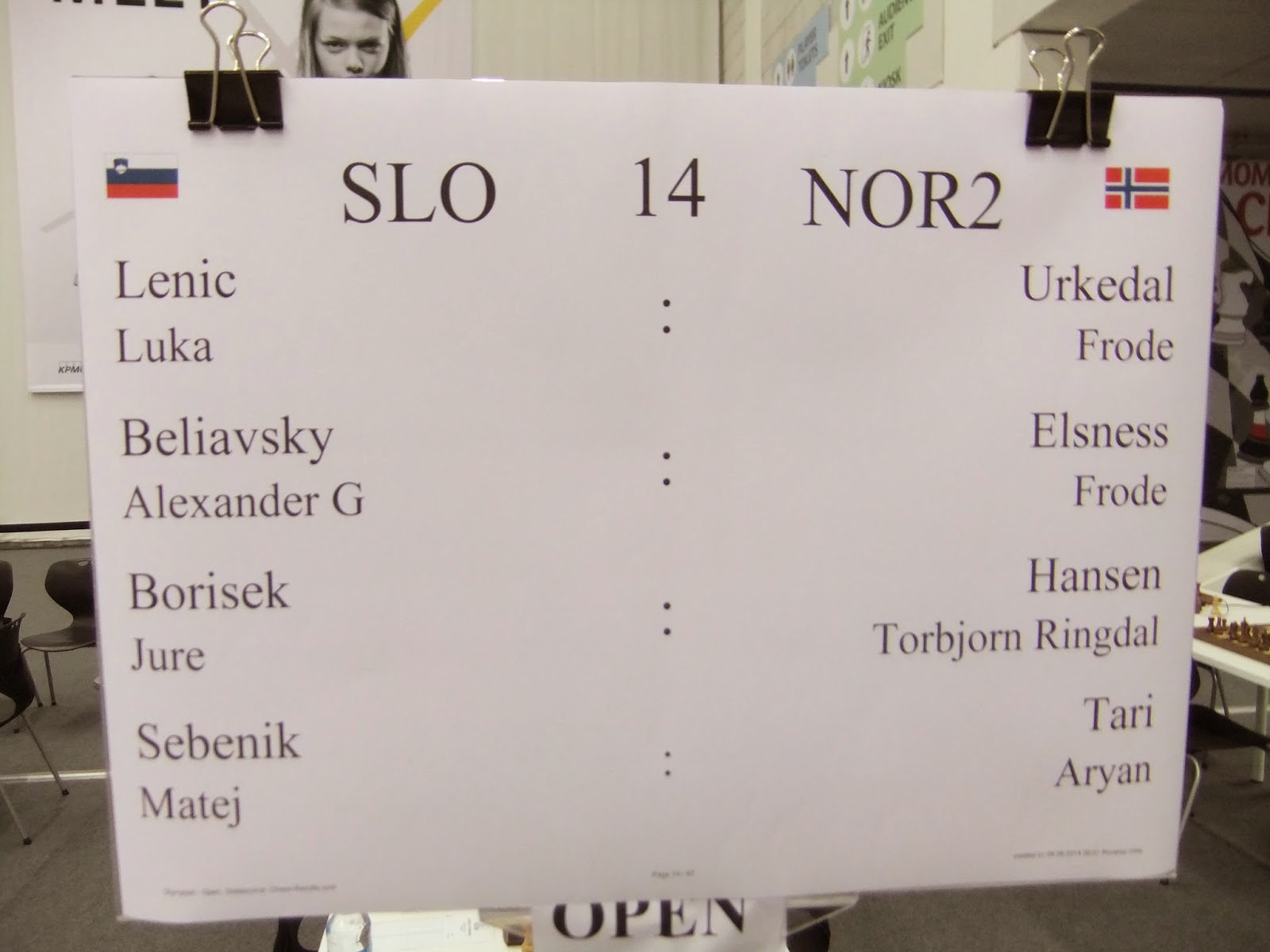 The matchups for the Slovenia v Norway 2 match 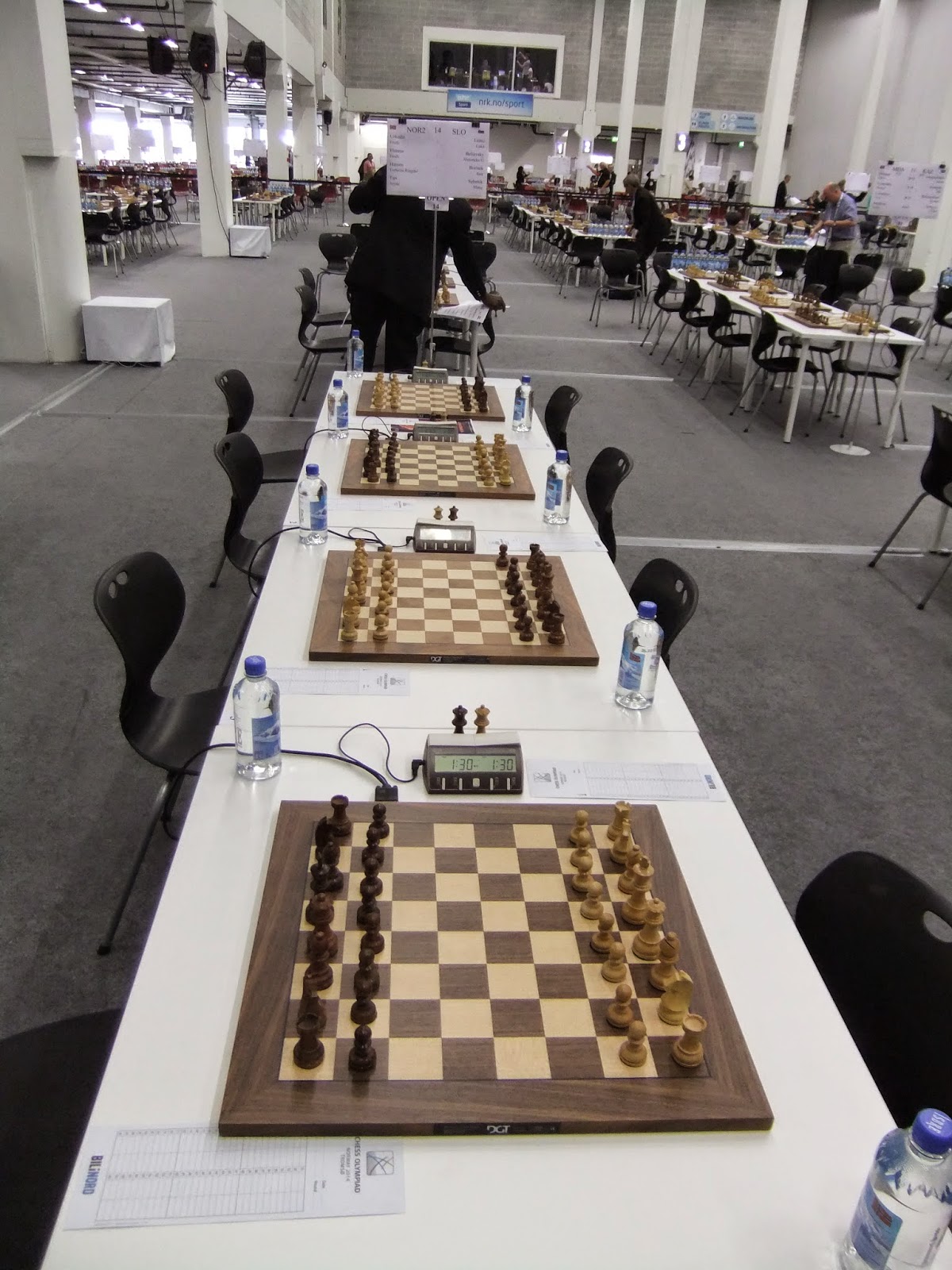 Tables all ready for the players 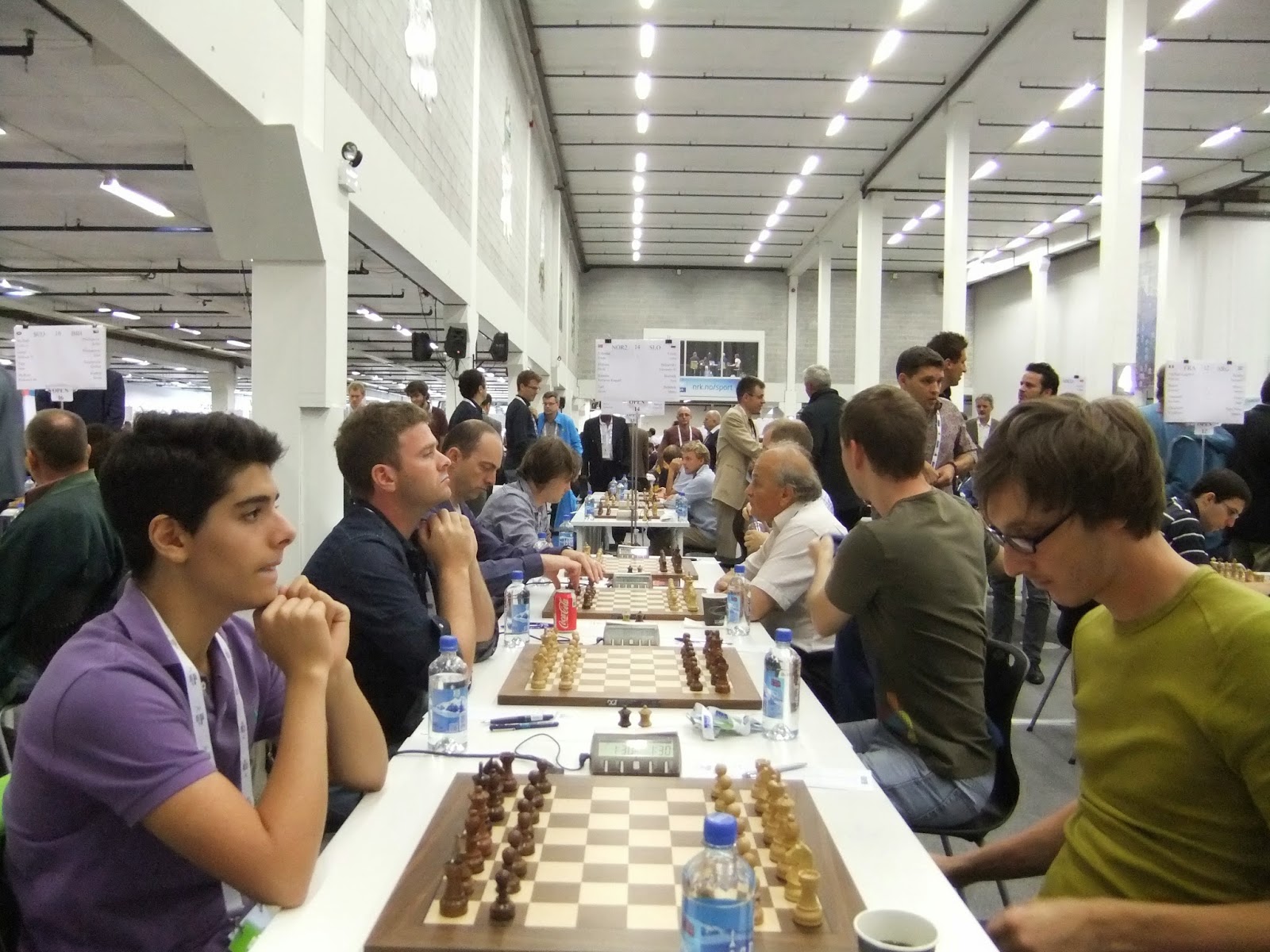 Players ready to start their games 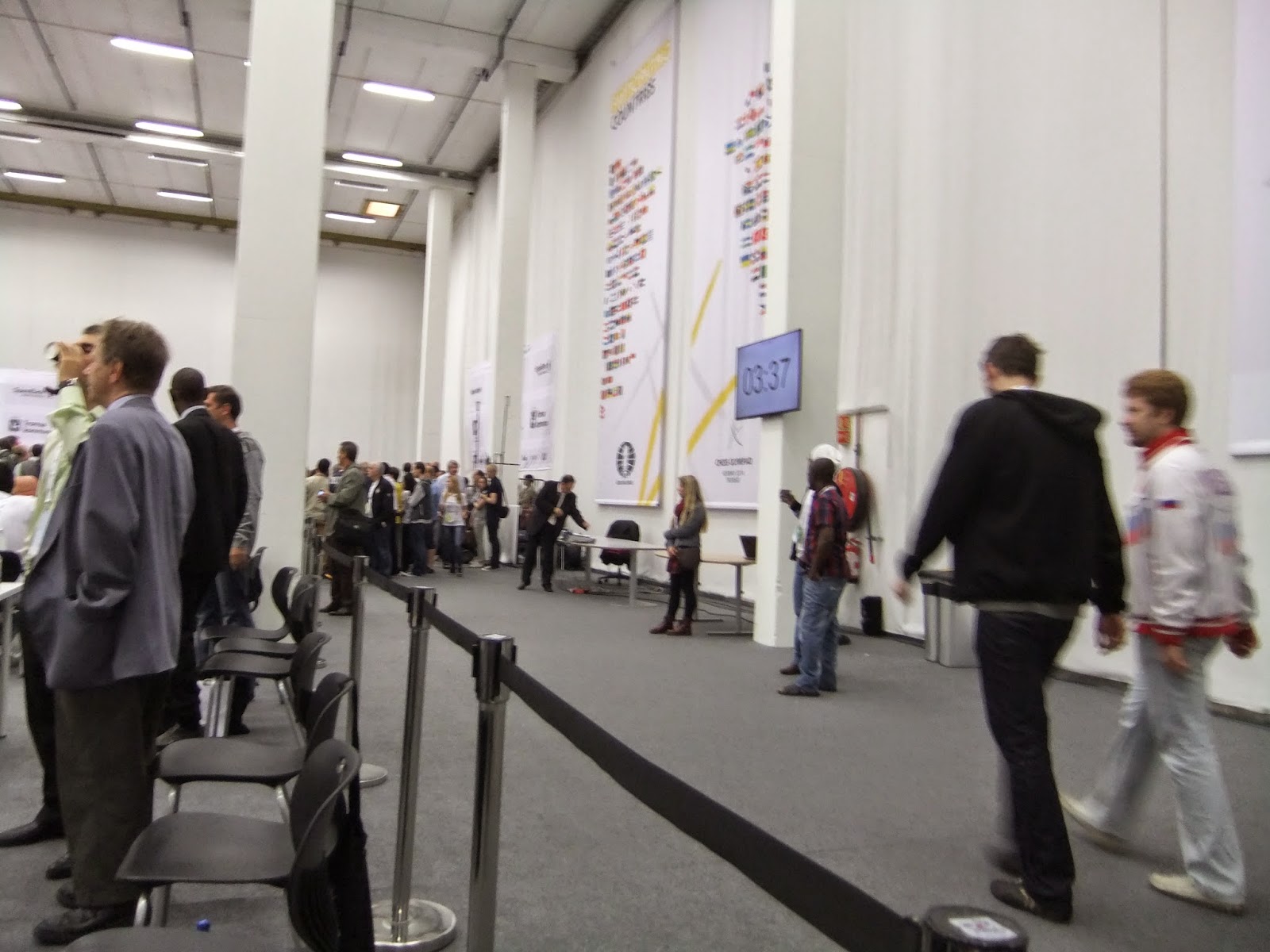 Chief Arbiter Takis Nikolopoulos, chief arbiter near the clock that counts down to the start of the round. Behind him you can also see the gathering media scrum around the clash between Carlsen & Aronian (which ended in a draw)

On paper, the match should have been won reasonably comfortably by the Slovenians, with around 100 points or more rating edge on all boards (as well as being an all-GM team facing an all-IM team). However another upset is what happened, with Norway 2 taking the win 2.5-1.5. All three decisive games are worthy of the 'Game of the Round' for different reasons ... Beliavsky's win was the model way to win with a space advantage, with some nice tactics to finish, Hansen's win was an impressive way to break down the often impregnable Berlin Wall, while Tari appeared to be in trouble early, but kept things together tactically, before again using tactics to his advantage to find a nice winning combination.

Beliavsky turning back the clock with a wonderful game ... I just love the way he controlled the game & never let his opponent get any play at all

Hansen doesn't just break down the Berlin Wall, he smacks serious holes in it! I haven't really seen white play against the Berlin in this manner before, so not sure if it is a theoretically important game or not.

Tari seems to be struggling to maintain his centre early, but once he gets a chance, the tactics are unleashed & the game is over quickly! 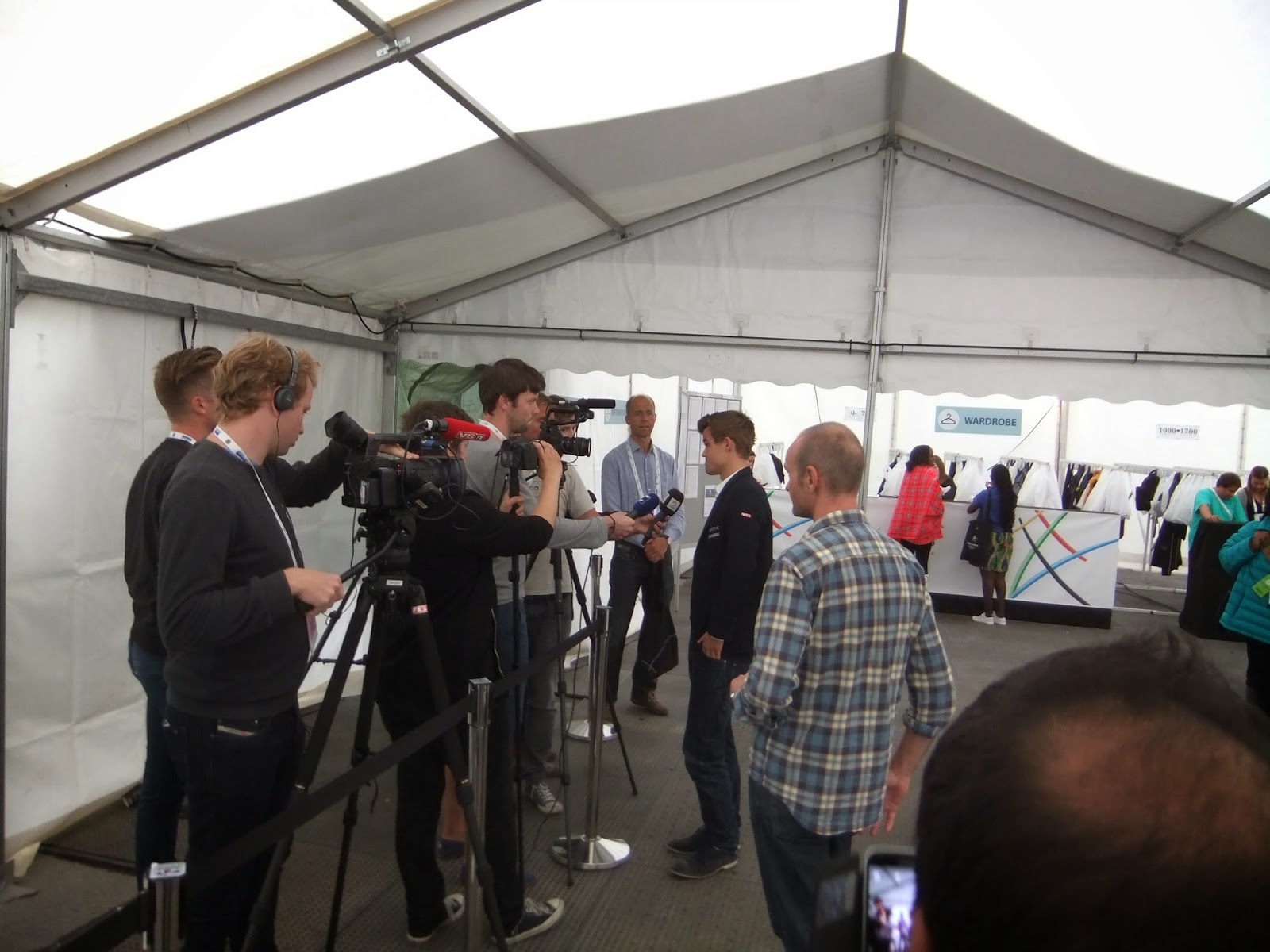 Did you know ... Czech board 1 David Navarra brings a block of chocolate with him each day. He's not the only one with a sweet tooth, but he is one of the highest rated! 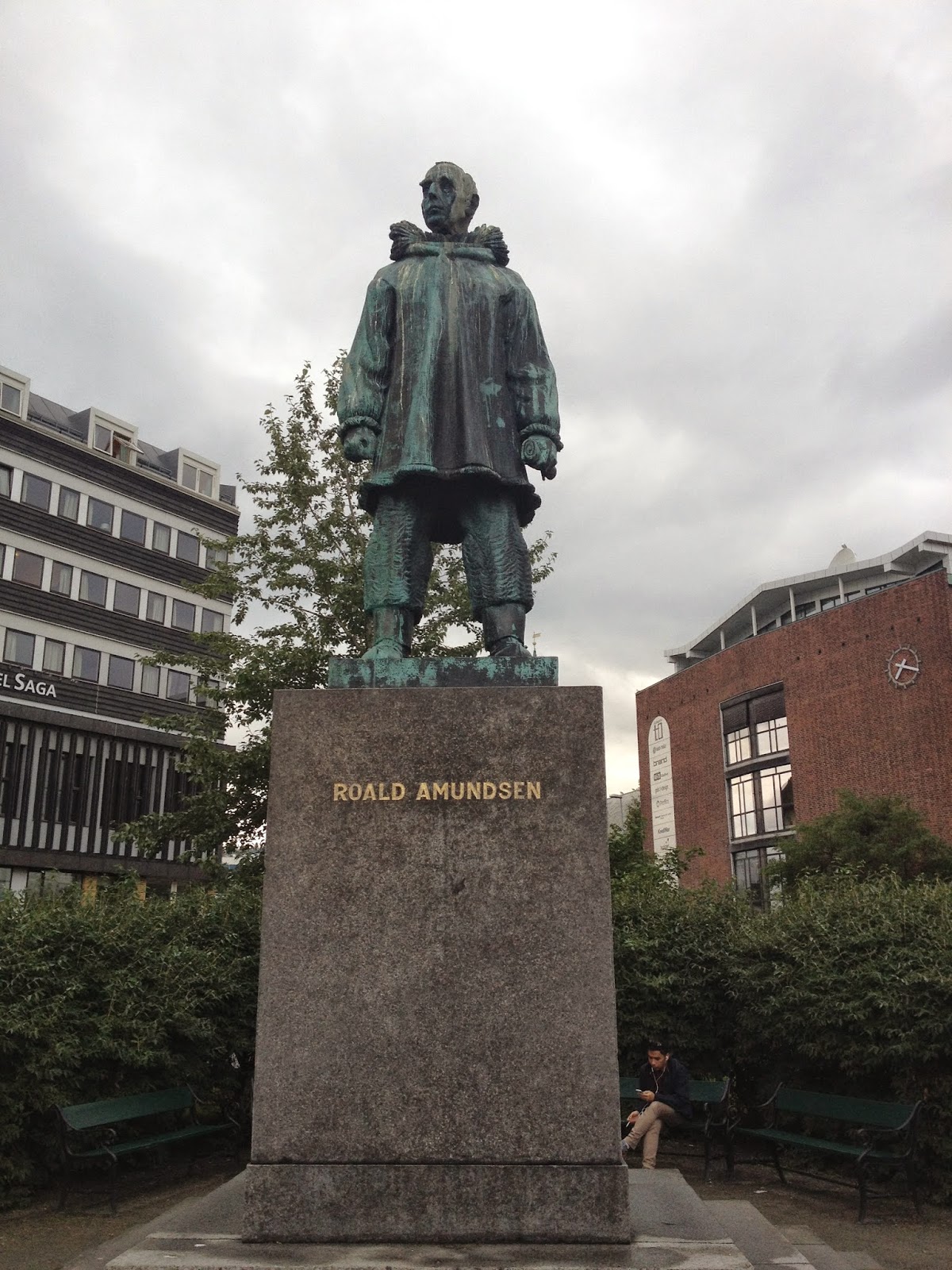 For those who have asked me about certain people, teams, etc, its not always easy for me to get photos of particular people. In terms of my role here at the Olympiad, I'm a match arbiter in sector 5 of the playing hall. The playing hall is divided into 8 sectors, with each match having its own arbiter, as well as an arbiter for each sector, who supervises the sector. Sector 8 has the top Open boards (with the top 3 boards each having an individual video camera at each table for the TV coverage), Sector 7 has the top Womens boards. Behind sector 7 is the refreshments area, where players can get hot & cold drinks & behind that is sector 6, which has the lower Womens boards & any special boards (eg: Blind chess boards). On the other side of the hall is sector 5 (where I am stationed), which covers Open boards 6-27, next to that are sectors 4 & 3, which have more Open boards. Sector 2 has both Open and Womens boards, while sector 1 has Womens boards.
Games start at 2pm each day, and arbiters need to be at the venue by 1pm to get things set up for our match for the day. That includes: putting up signs with daily matchups, setting clocks, putting out scoresheets & water for our match, as well as checking the Match Protocol paperwork is correct. That normally takes around 10 minutes & sometimes I also help out with other areas while waiting for players to arrive (eg; taking down old signs with previous days matchups if arbiters are late arriving, etc). I then sometimes get some time to look around other areas of the hall & have at times made use of this by taking photos of various parts of the playing hall, or heading to the Expo area & the like, but often during this time there are few players in the venue. I should be back at my match by 1:30 so that I am there when the players (and occasionally team captains) arrive & am basically in the same area until all games in the match I am supervising is completed (which based on the early rounds, is anywhere from 5:30 to 7:30pm). Given that the bus back to the arbiter accommodation leaves at 8:30, and dinner starts being served from around 7:30 or a little before, once 7:30 arrives, its pretty much straight to the hotel (The Edge) for dinner & then on to the bus. Any time in between I often have to look around the playing hall & take some photos (as I have done on occasion), however the only players still at their boards are the ones that are still playing, so particularly on the lower boards, there are often very few (if any) games still in progress at that time.
Having said that, I'll try to see what I can do if people have any particular requests, but I can't guarantee success!

As for the Australian teams, they both lost their tough games last round. The Open team lost 3-1 to Italy, while the Women lost 2.5-1.5 to Latvia. After the rest day, they play Botswanna in the Open & Norway 2 in the Womens, which are both winnable matches. However as I'm sure you have seen already, just because someone is the favourite does not mean that the result is a foregone conclusion! Hopefully both teams play well & can return to the top end of the standings (Open are currently tied for 75th place - 83rd on countback; Women are currently tied for 61st place).
Posted by MelbourneGamesCoach at 05:25