So this was the REAL Day 1 ... my first proper day at an Olympiad!
I was allocated to section 5 of the playing hall, which I now know to be the Open section, from boards 6 to 27, so I will be on one of those boards throughout the event.
Today I was on board 13 for the Puerto Rico v Cuba clash, featuring the all-GM Cuban team lead by Leinier Dominguez & Lazaro Bruzon. Although they had a significant rating advantage, three of the four games were reasonably long, hard-fought encounters, although the Cubans did end up winning the clash 4-0 as expected.

Some things I noticed about the match arbiter role that I am doing here in Tromso:
* Given that I am only looking after four boards, you really have no choice but to watch the chess, which is a big change from the usual weekender or similar event when the actual chess is rarely a focus.
* Once the games were underway, something that really struck me was just how quiet the playing hall was, at least where I was. Much quieter than the average weekender.
* GMs have very good technique - although three of the four GMs seemed to be in tough positions at one stage or another, once they got an edge, they quickly put their opponents away.
* Even with all the extra staff, there are still issues with things like chess clocks. David Navara from the Czech Republic (playing on a nearby board) was the victim of two clock incidents in his game - the first saw his clock go blank mid-game (one of the extra jobs we do is keep a track of the clock times every half an hour, which helps sort out issues such as this), while the second saw the replacement clock set incorrectly, as there was no increment set for the second time control!
* Even though it was my first Olympiad & I really knew very little of how things 'typically' ran, players were always checking things with me first before doing anything - asking me where the toilets & refreshment area were, captains asking if it was OK to put a bottle of water next to their players, etc. I suppose if you look like you know what you are doing, the players & team officials are happy to go along with it.
* Although I am within a few metres of every board (it would be less than 100 metres to the furthest board) I actually found out very little about other matches outside my area & the internet coverage is a much more reliable place to find out results than asking an arbiter!

Of course the biggest issue for arbiters is the travel each day & I really discovered this after this round. The bus schedule back to the accommodation in Malangen has buses leaving at 8:30pm & 11pm. By the time the match I was looking after finished & I had filled in the paperwork & tidied up the boards, I didn't leave the venue until about 8:15pm. By the time I went to the Edge hotel to grab something for dinner, it was just after 8:30 when I was effectively ready to catch a bus back to the accommodation ... but the bus would not arrive for another two hours! I suppose it gave me a chance to have a bit of a look around the town & take a few photos (plus spend my first NOK in Tromso - got a large shake at Burger King for NOK33 - about $5.65!), but given the size of the town, the walk only lasted about an hour. Fortunately I had brought my poker book with me, so continued to read that while waiting for the late bus before finally arriving back at the accommodation just before 12:30am.

In terms of how the Australians went, both teams scored 4-0 wins, the Open team against the US Virgin Islands (Max had the day off & I saw him looking around the playing hall at a number of other games in progress), while the Women beat Kenya (I spoke to Giang, who did not play this round, briefly before the games started, but did not even spot the table where the match was to take place!). The 'reward' for these wins are some very tough round 2 matches - the Open team face Armenia (seed 4), while the Women's team face the Ukraine (seed 3). Hopefully they will all put in good performances & it would be great to see an upset win!

Of course the important part of the blog is the photos, so here are some photos to finish - this time taken with my digital camera rather than my iPhone (which is banned from the venue, along with other phones & computers), which I leave at my hotel (so don't expect a response if trying to contact me online while the round is in progress!): 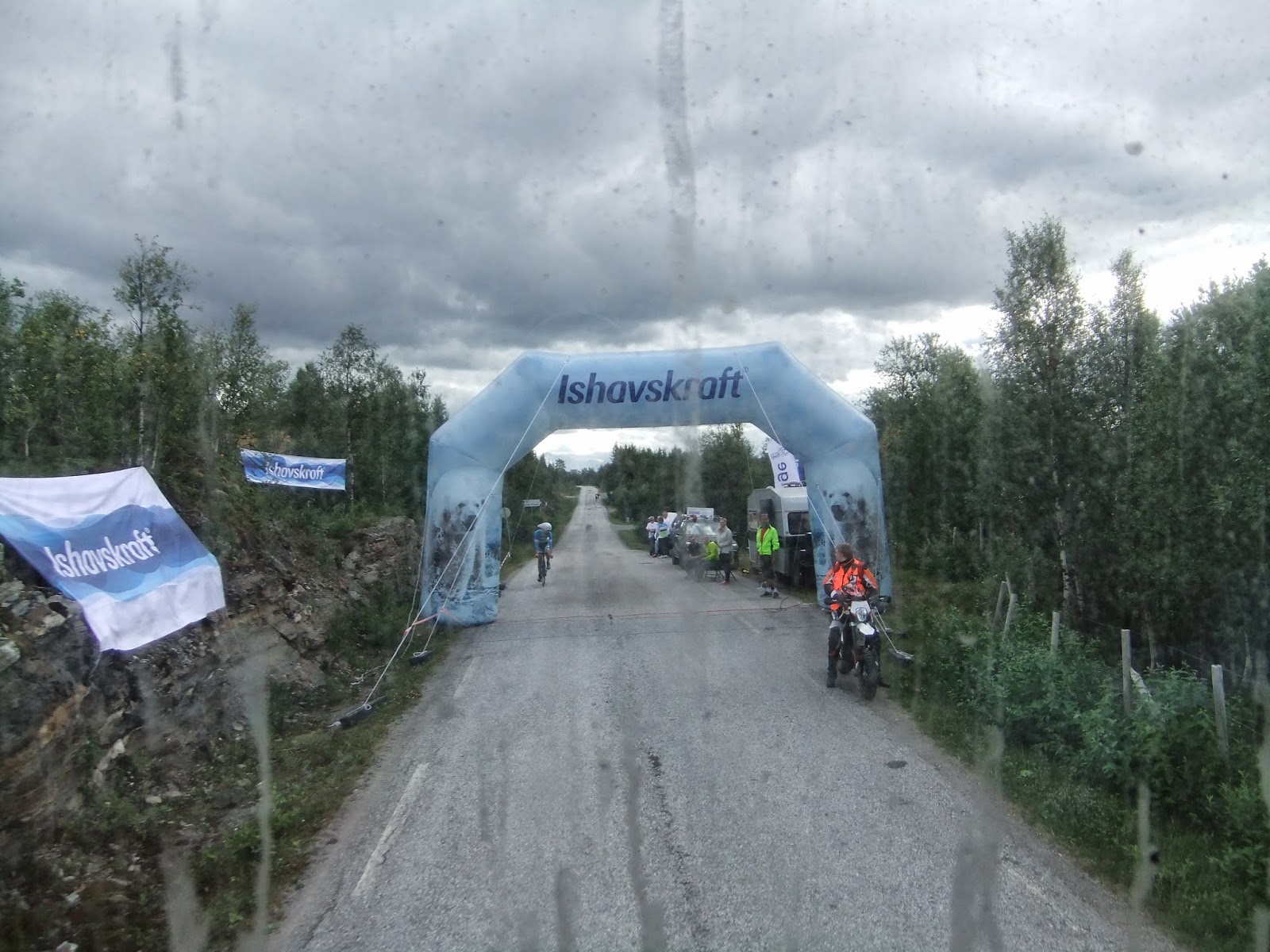 There was a bike race on the road to Tromso today, with a number of cyclists staying in the same accommodation. It also meant that the bus had to navigate under this obstacle once it left the hotel area! 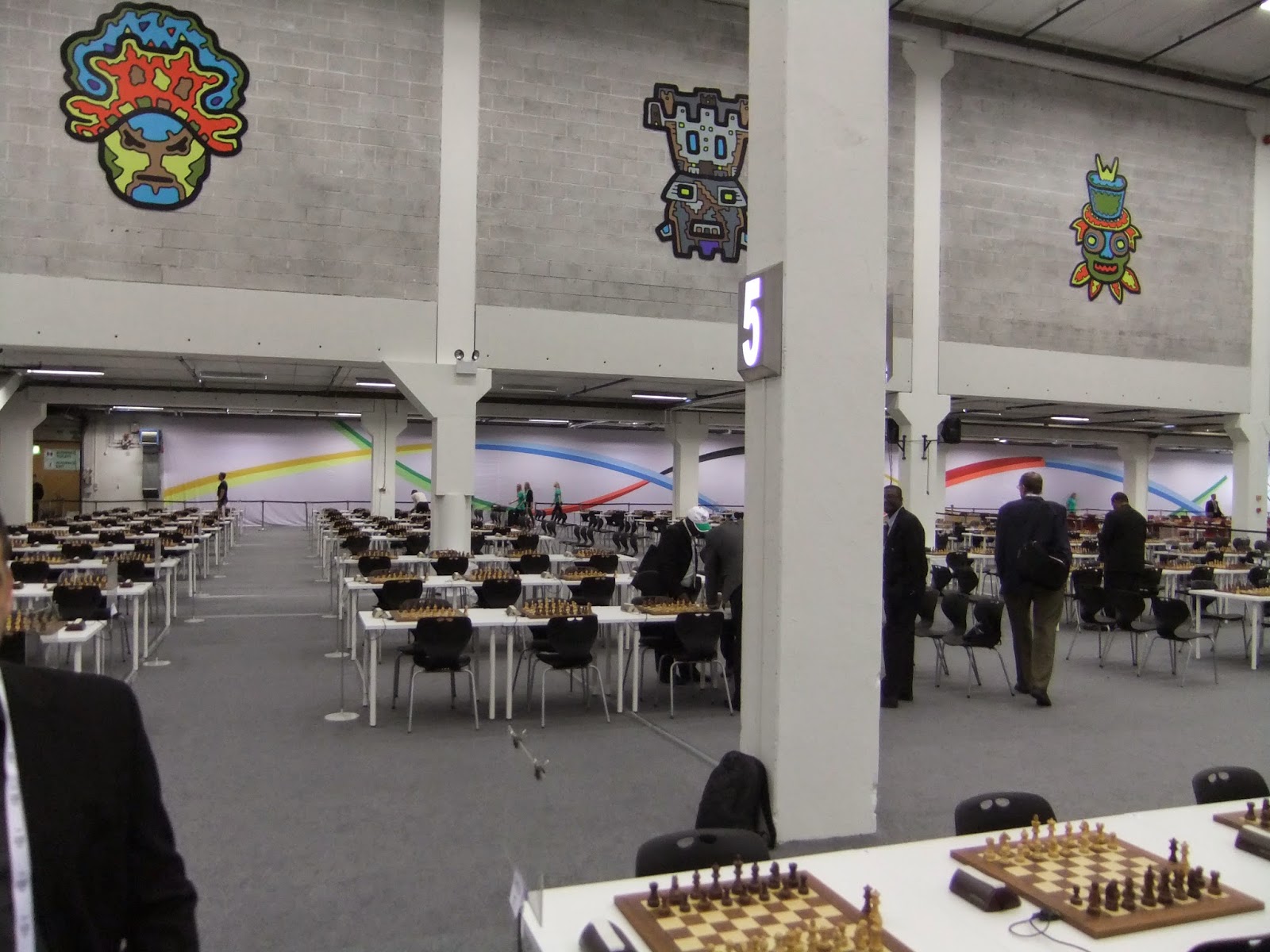 My 'area', section 5, where I will be spending the bulk of my time at this Olympiad. 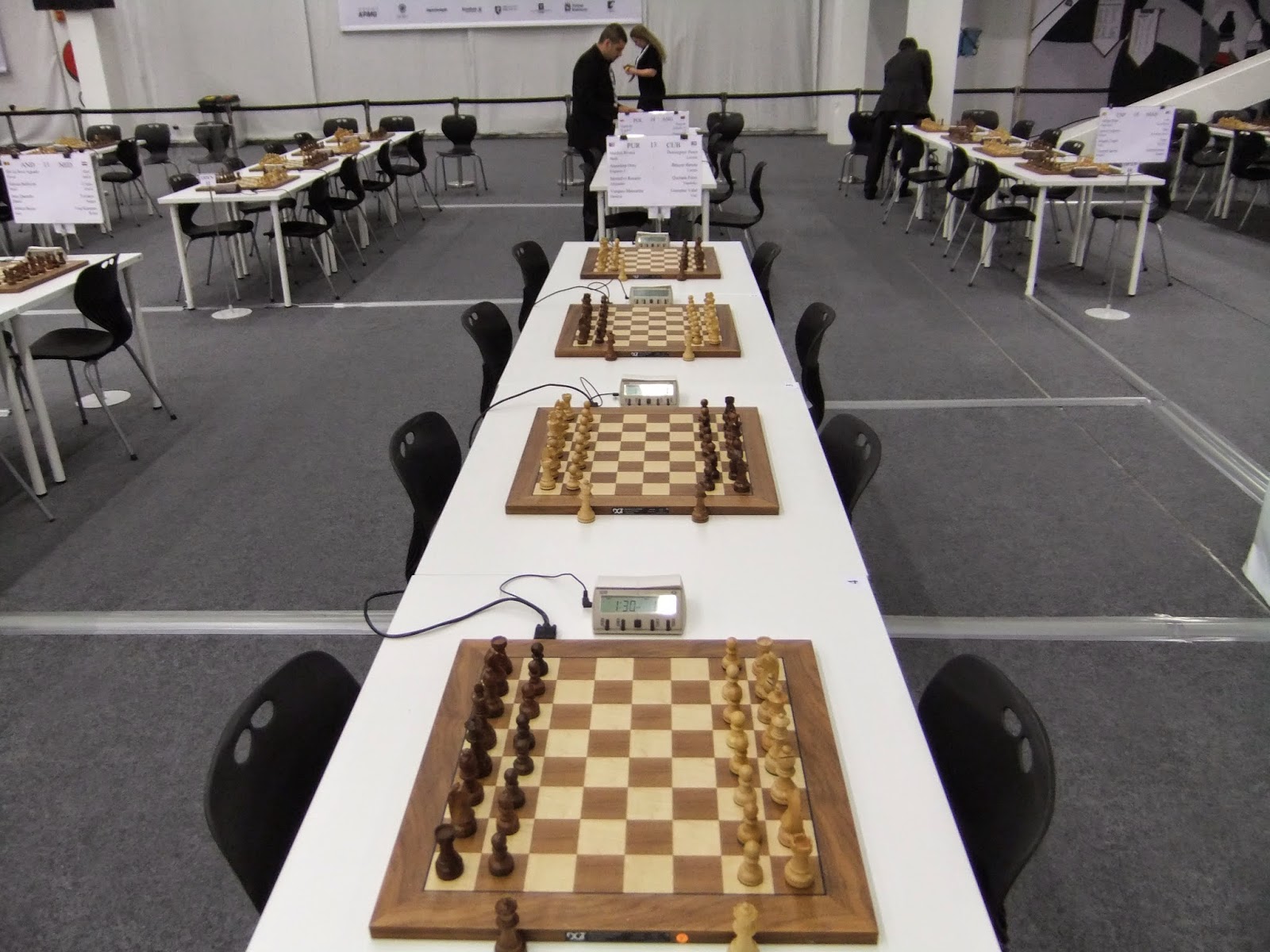 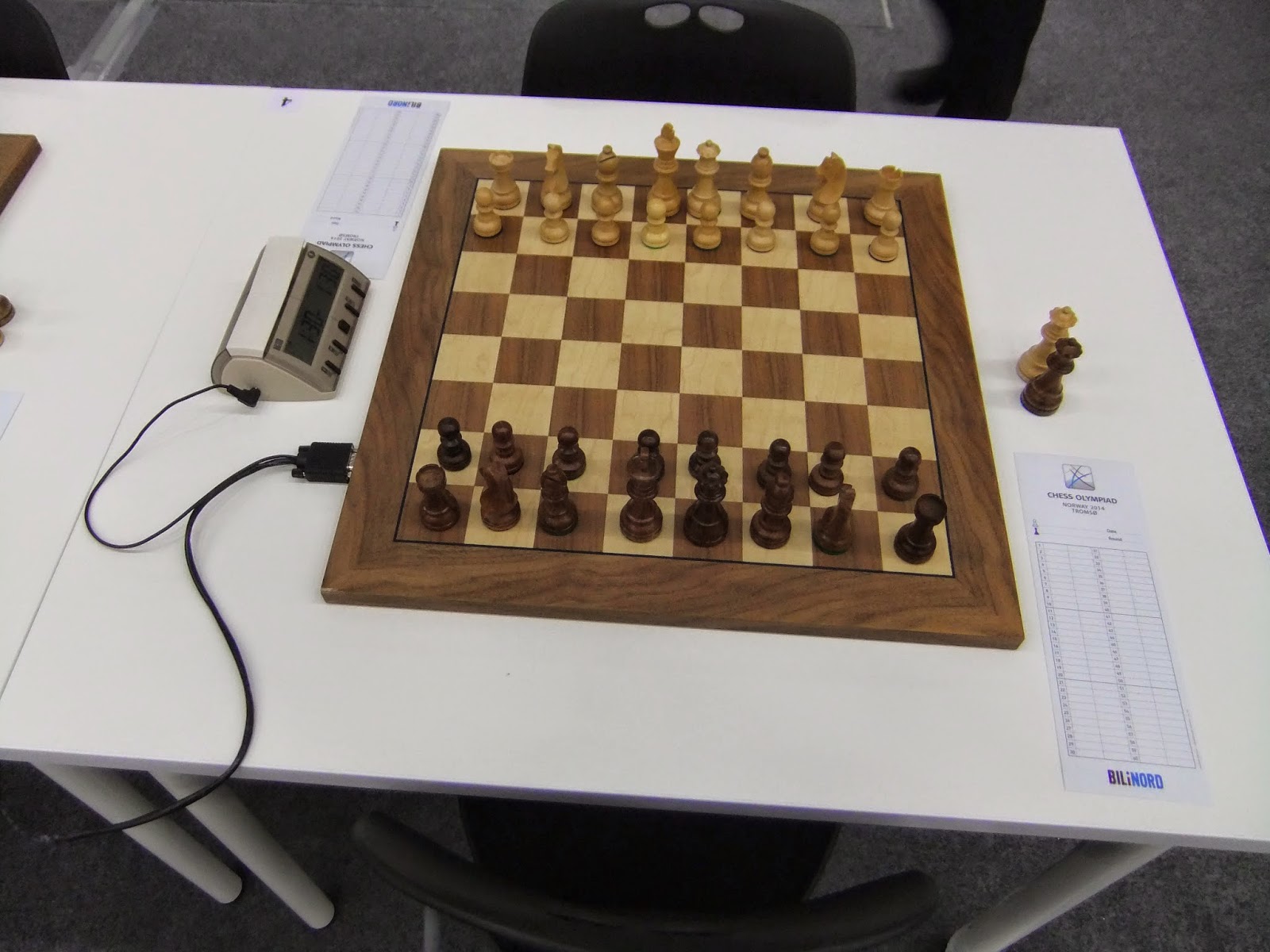 A typical board setup, with scoresheet & spare queens (as well as some slightly awkward exposed cabling) 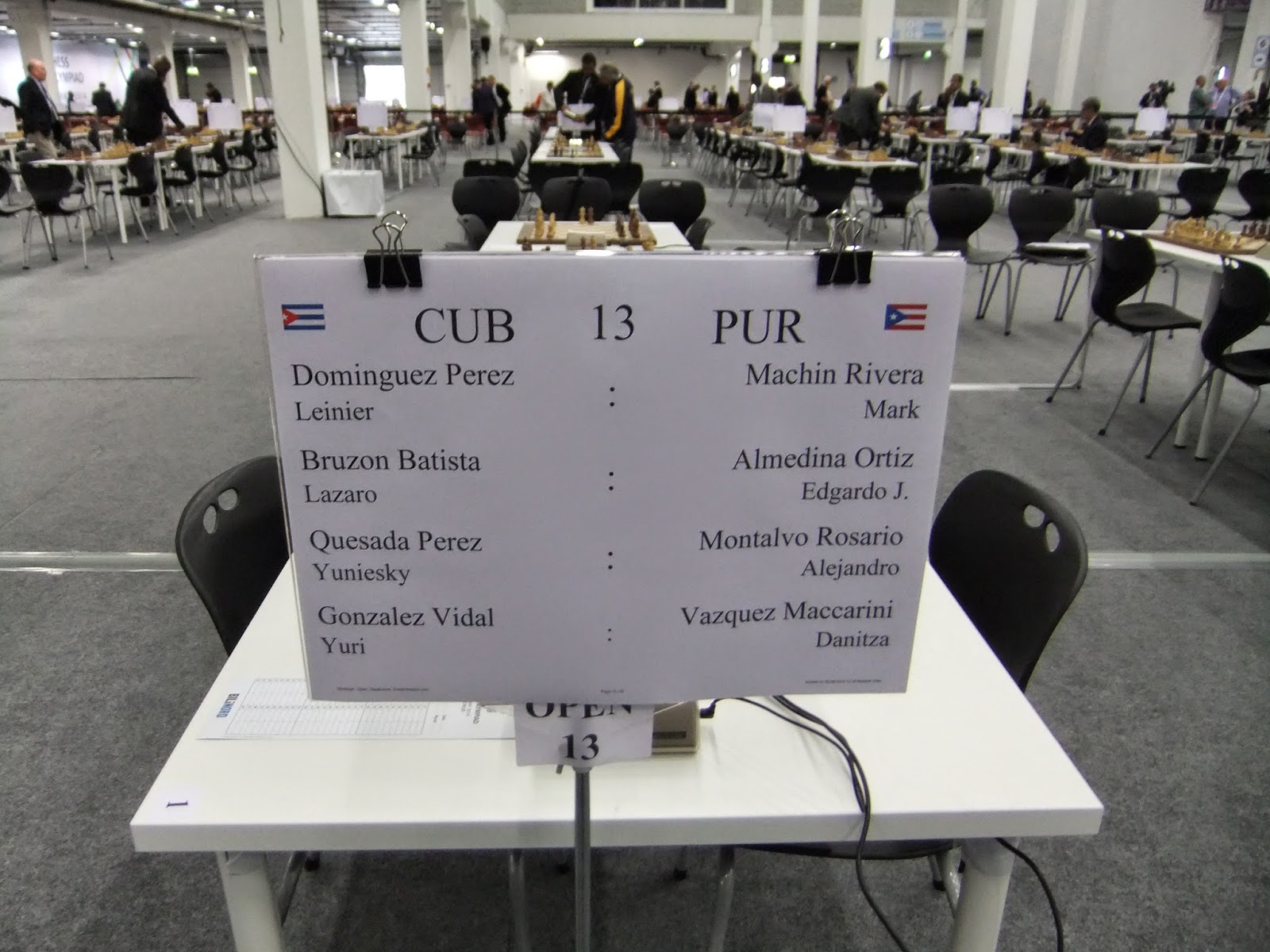 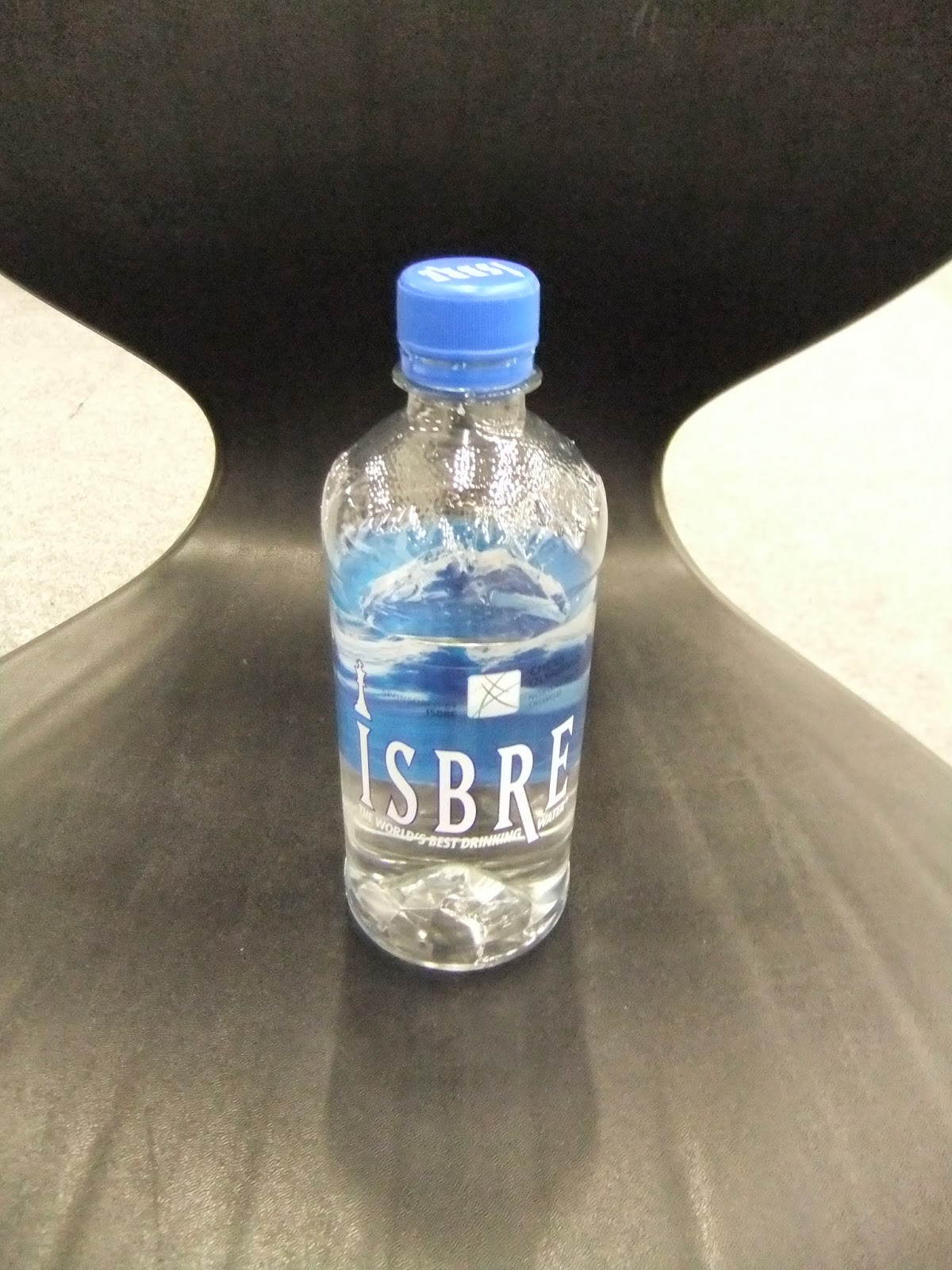 Isbre water, with Olympiad logo, is available for players & officials 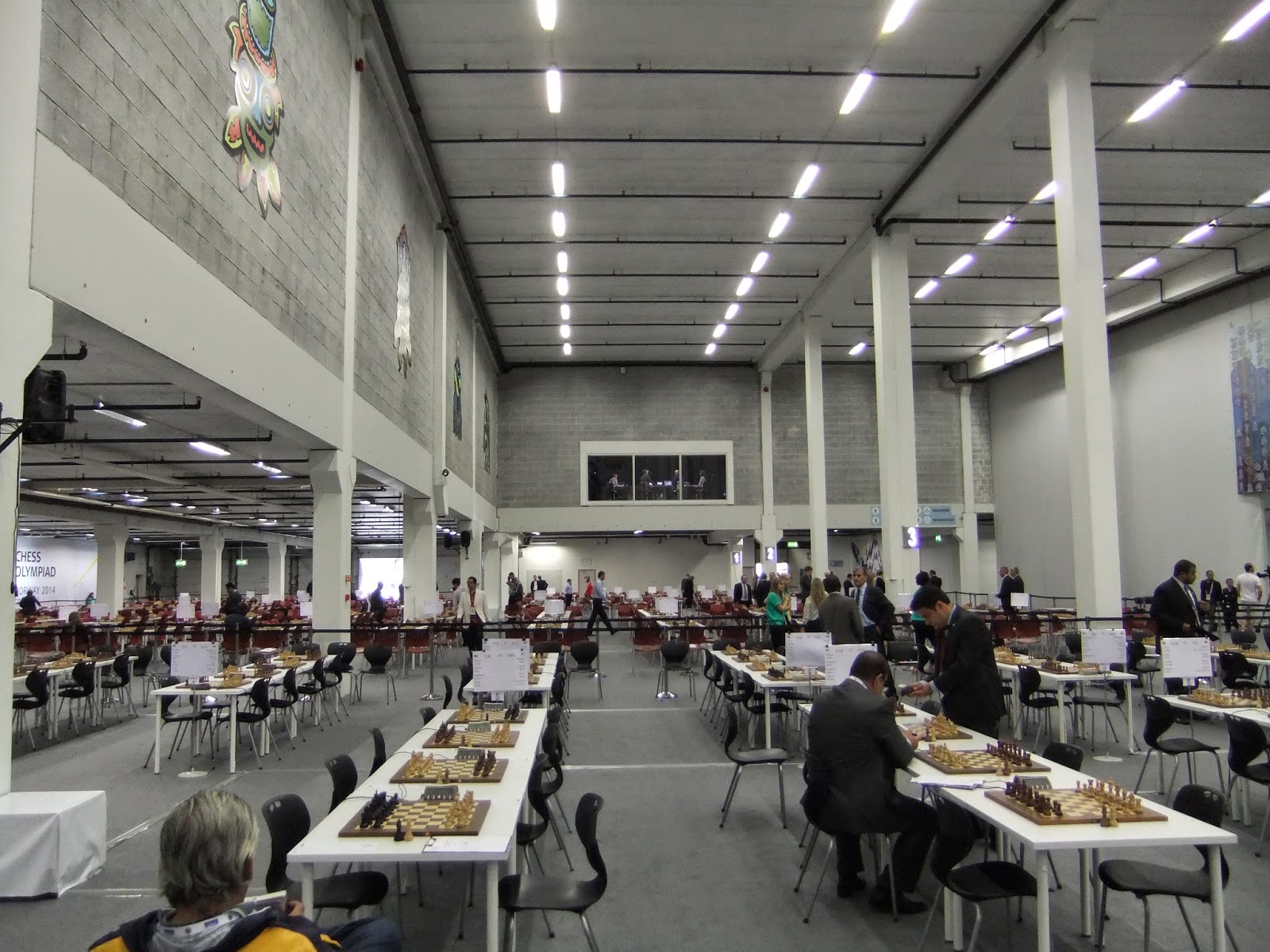 A view of the playing hall, with the TV studio area in the windows above. 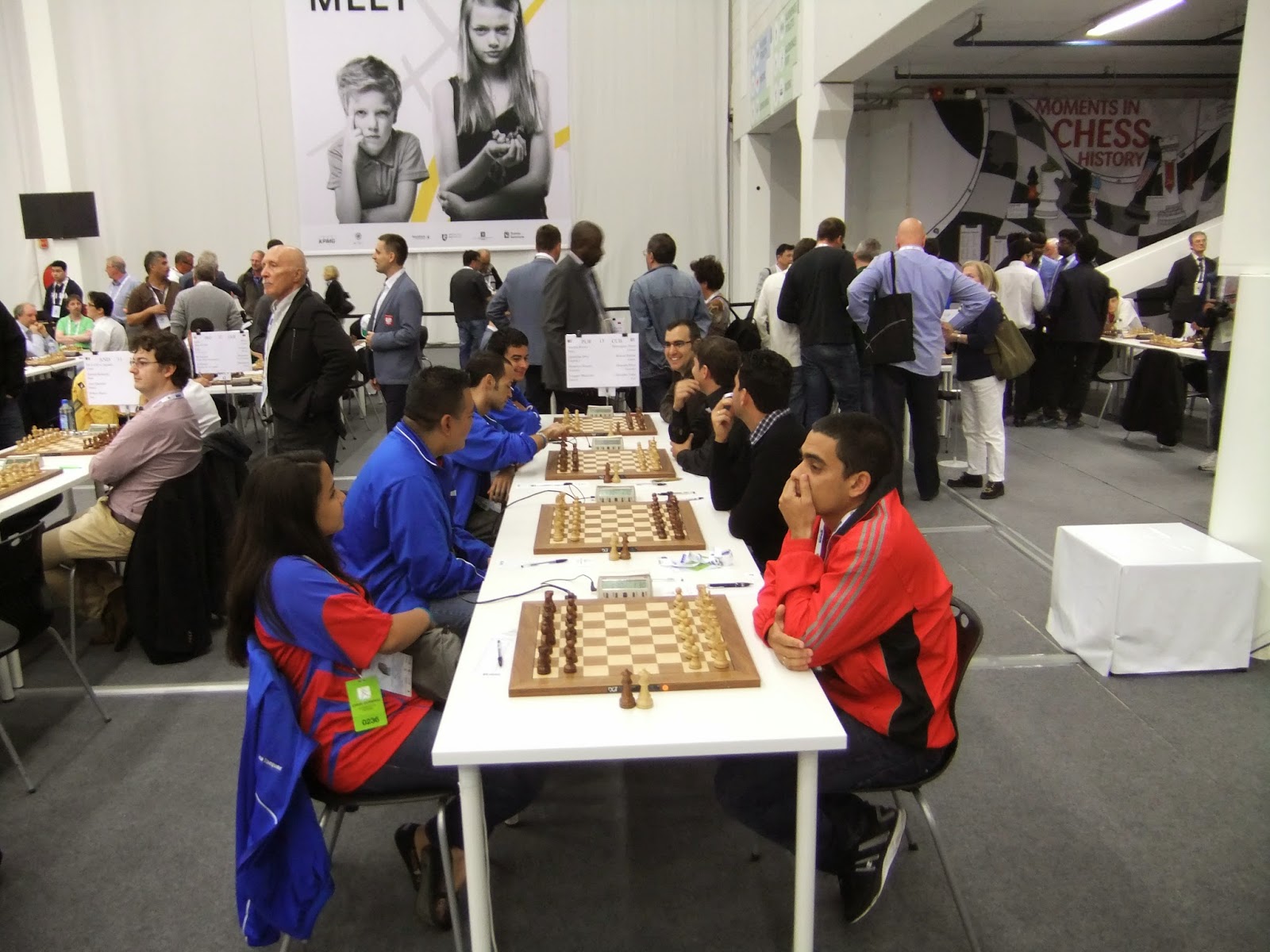 The teams arrive & are ready to play - yes, the Puerto Ricans had a WIM playing on board 4 of their Open team. 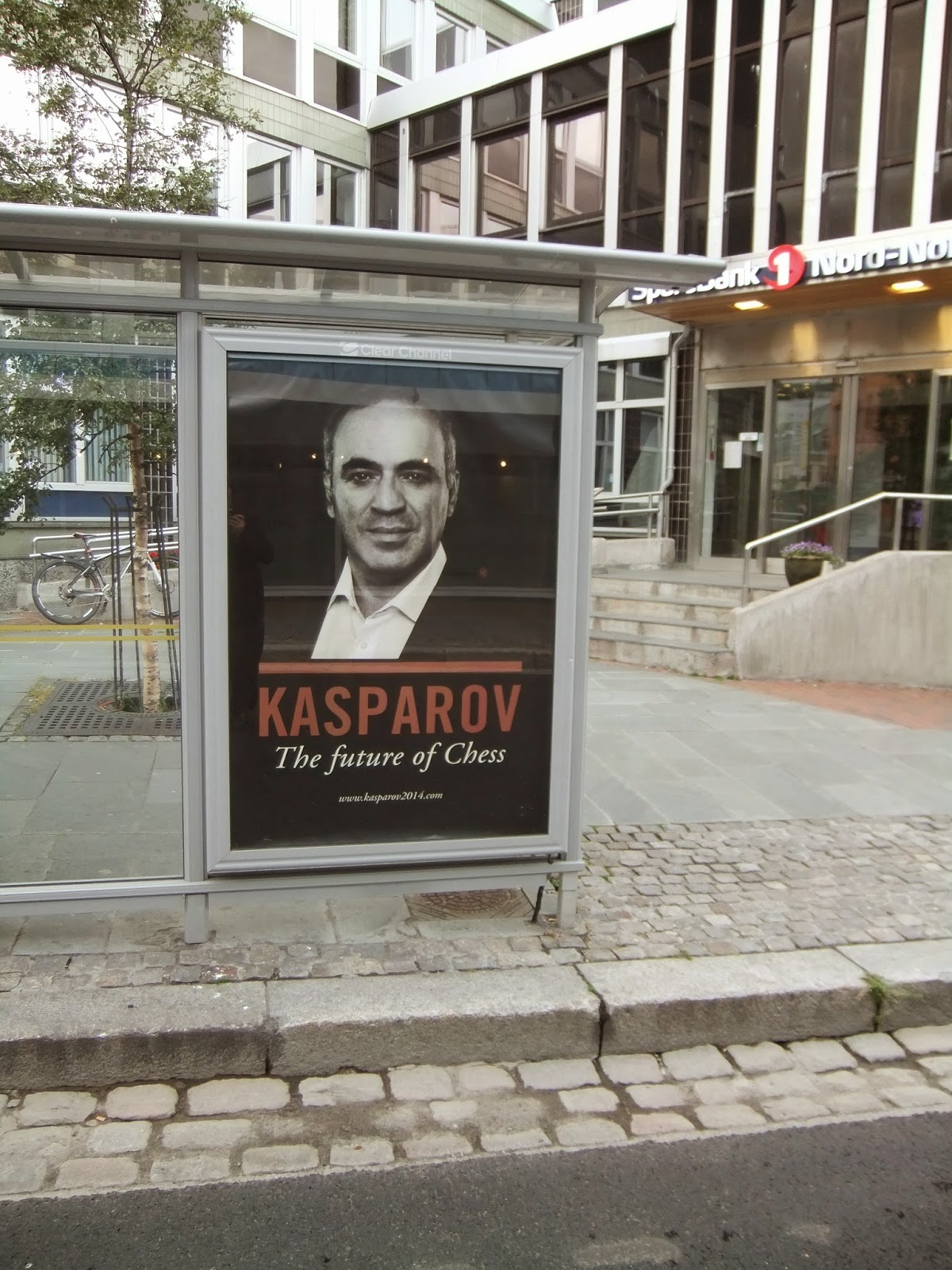 One of the many Kasparov posters around Tromso 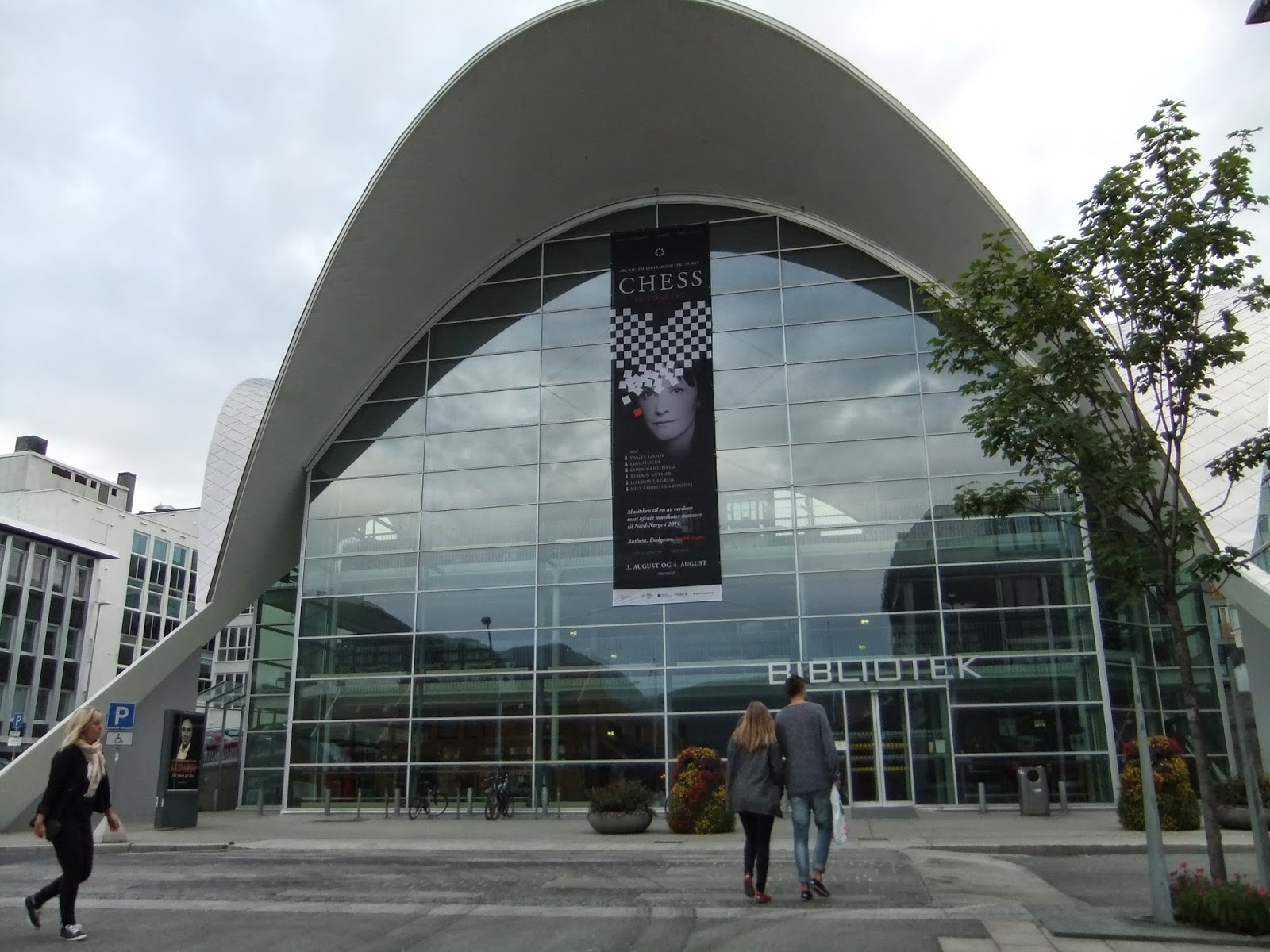 The Biliotek, where Chess: the Musical will be staged in the near future 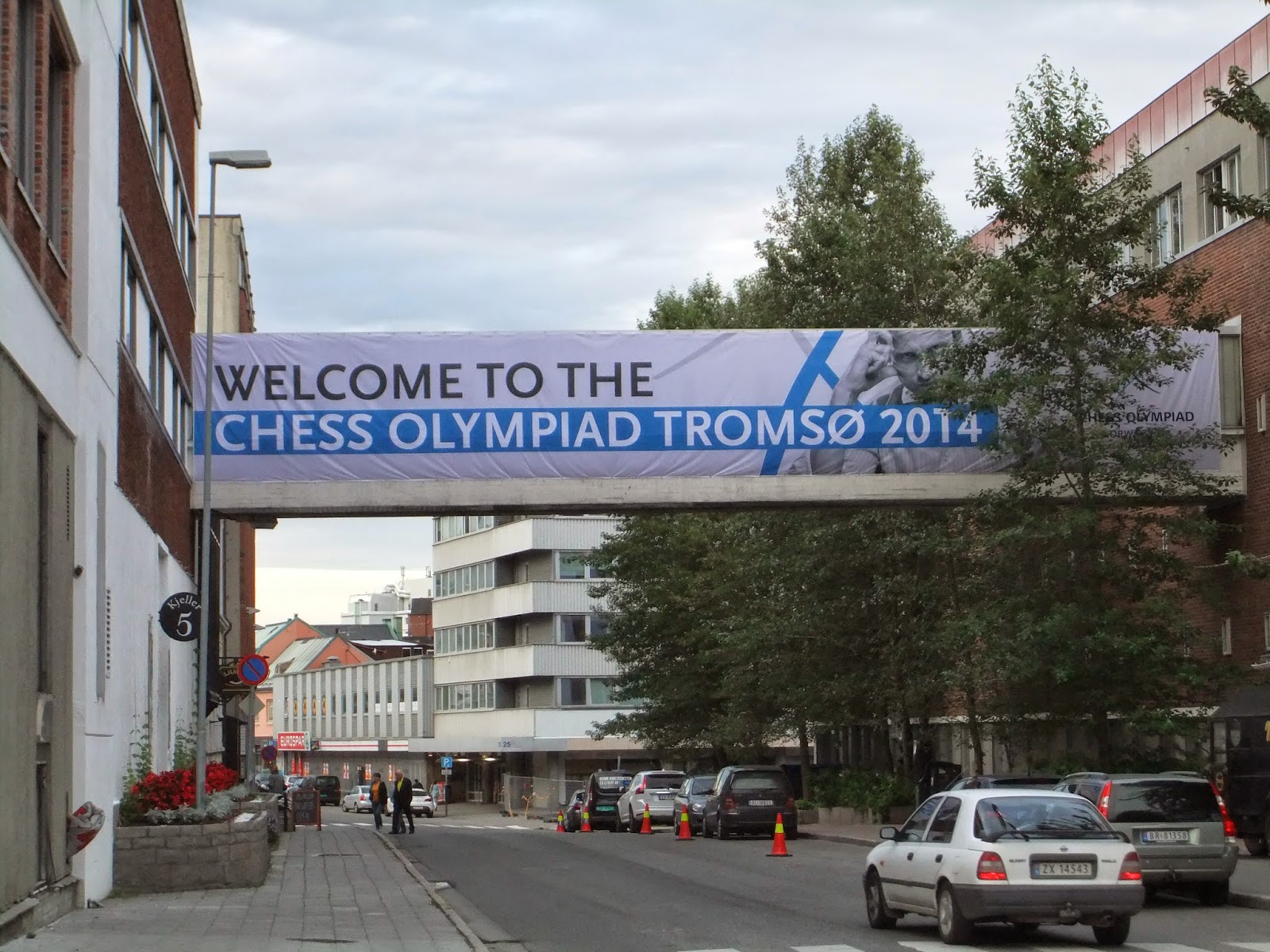 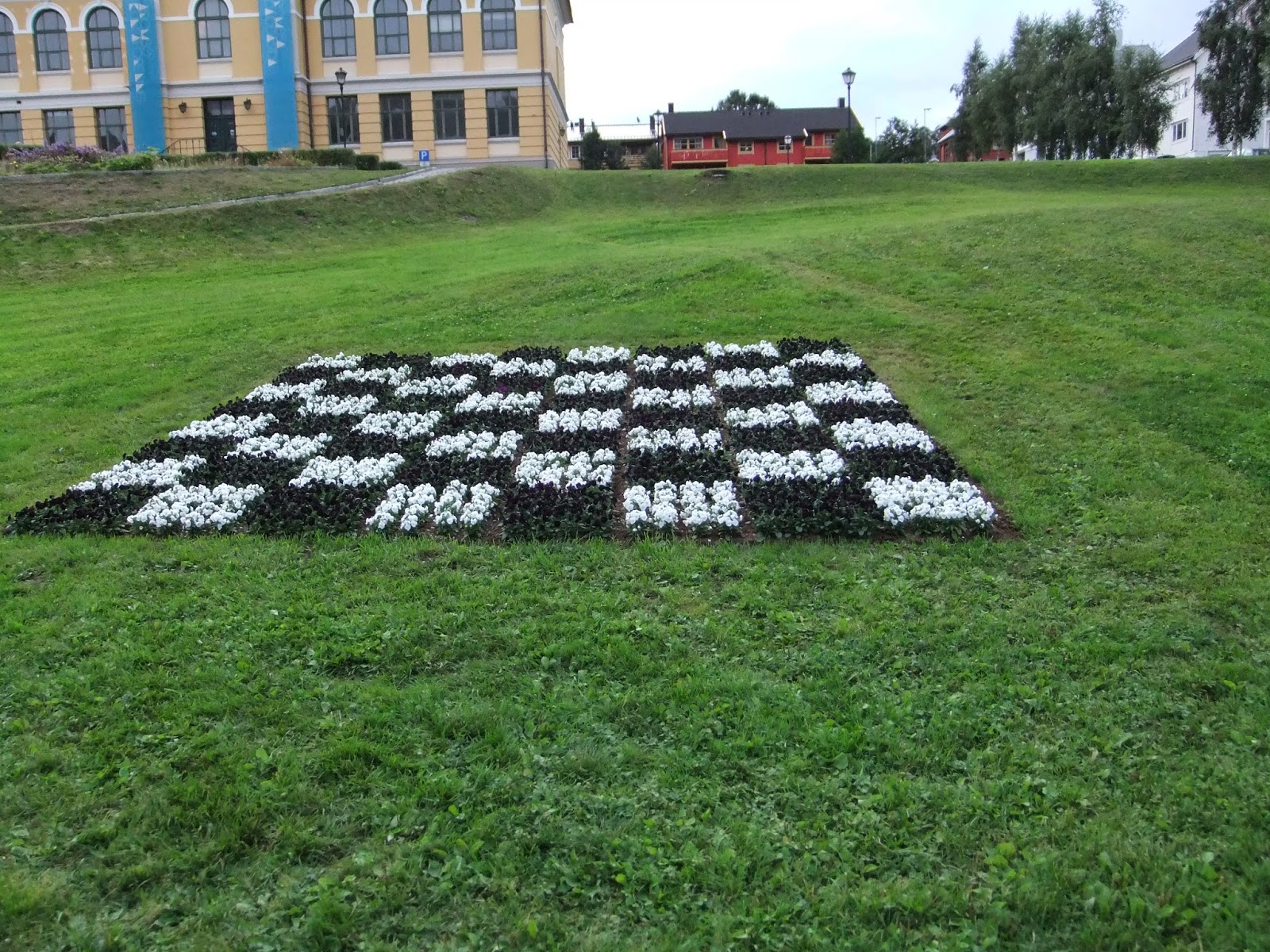 There's even flower beds that have been planted to have a chess theme! 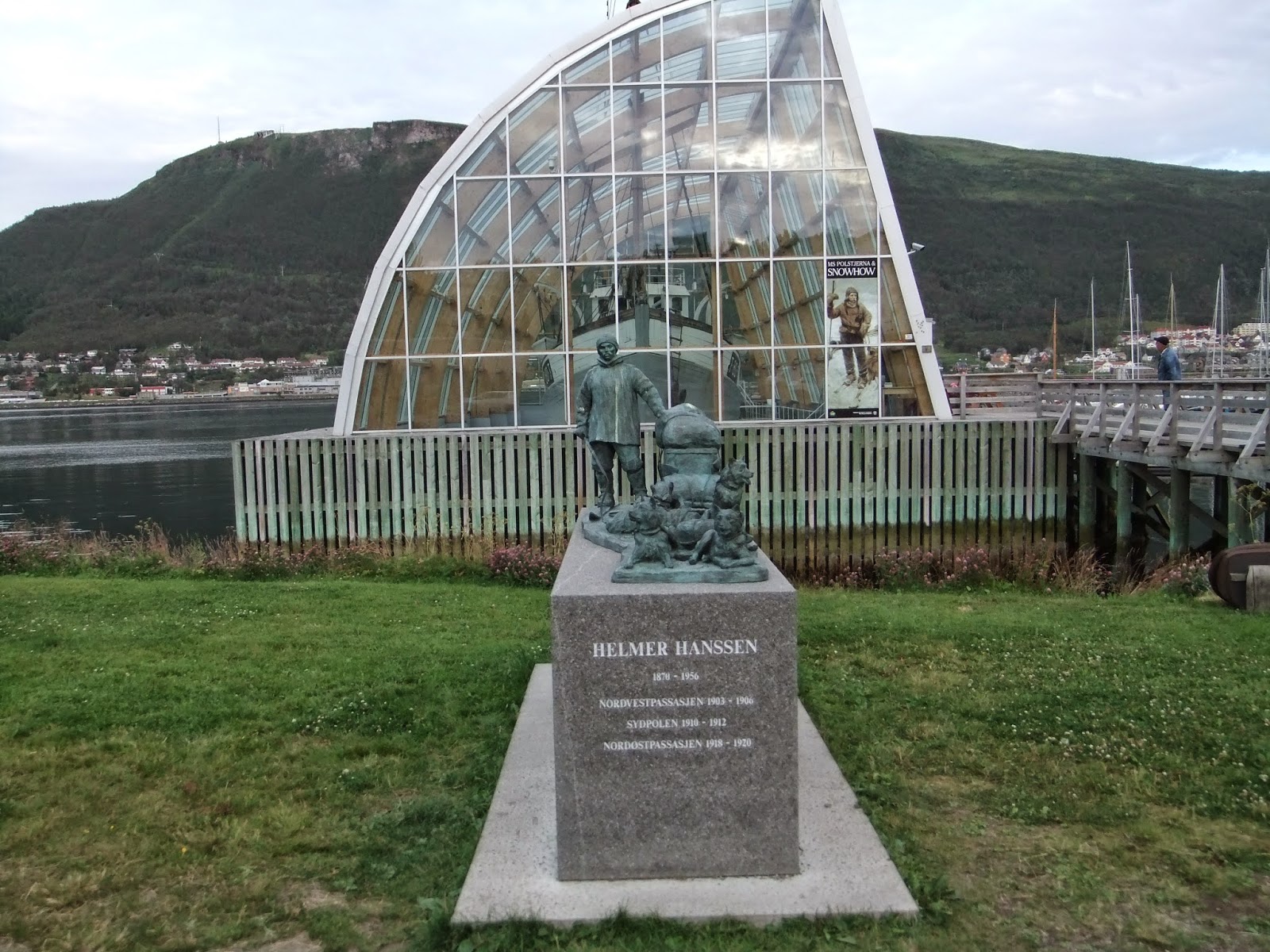 Statue of Helmer Hanssen outside the MS Polstjerna museum exhibit 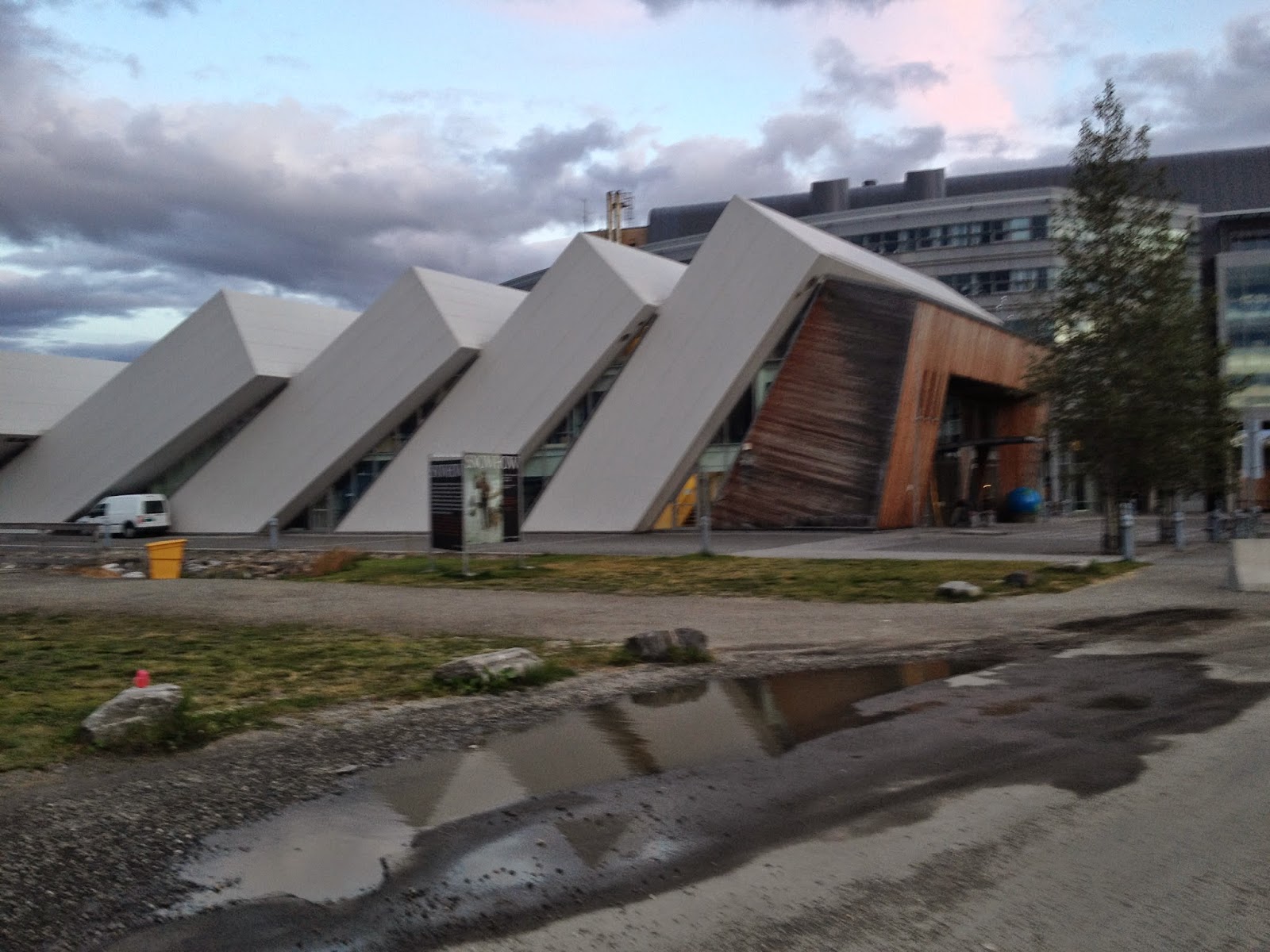 The rather interesting looking Polaria, the northernmost aquarium in the world!

Also something that I will try to add is my 'game of the round' from the match I was arbiting. In this case, it was the board 3 clash between IM Alejandro Montalvo Rosario (Puerto Rico) against GM Yuniesky Quesada Perez (Cuba), where Quesada makes short work of Montalvo's early aggression in the Trompowsky: