The annual Australia Day Weekender at the Melbourne Chess Club attracted 33 players, including 1 IM, 2FMs & 2 interstate players (one from Queensland & the other from Canberra). The action was largely hard-fought, with FM Bill Jordan ultimately prevailing scoring 5.5/6, to finish a clear point ahead of four players, IM James Morris, Karl Zelesco, Sylvester Urban & George Hua.
Unrated George Hua had played a number of years ago as a junior in China & had recently scored 4/7 in the Canterbury Summer Swiss, but his round 1 win over Max Chew Lee was a sign of things to come for him later in the tournament. He continued this run with a win over Marcus Raine in round 2, while other upset wins saw Gary Bekker beat Tristan Stevens & Nick Ilic defeat Franz Oswald. Round 3 saw another strong performance by George Hua, holding Karl Zelesco to a draw, while upset wins were recorded by Geoffrey Hilliard over Richard Voon & Tanya Kolak over Franz Oswald. By the end of round three, only IM James Morris & FM Bill Jordan remained at the top of the field with a perfect 3/3 score.
Round 4 saw Jordan & Morris play a fairly short draw, while Karl Zelesco & Michael Baron won their games (with Baron beating Hua) to join Jordan & Morris in a share of the lead. On other boards, Ethan Lim beat Ian Stone when his phone went off (although Ethan had the better position at the time), while Anthony Hain & Vishal Bhat held their more fancied opponents to draws. Round 5 saw Jordan & Morris once again in a share of the lead after beating Baron & Zelesco respectively, while Marcus Raine beat Tristan Stevens to be only half a point behind them heading into the last round. On other boards, Mark Vucak beat Jack Hughes & Carl Loucas beat Lee Forace, while Jason Chew & Denise Lim held their higher rated opponents to draws.
Just when it seemed as though things were going smoothly for Jordan & Morris in the lead, the final round happened & it seemed that very few results went according to rating! George Hua managed to beat James Morris after Morris blundered. This allowed Hua to join Morris on 4.5/6. Sylvester Urban upset Michael Baron to join them on 4.5, while Karl Zelesco bucked the trend & won as the higher rated player against Will Bakanursky to also join the group on 4.5/6. Other boards also saw the upset trend continue, with Ethan Lim finding a perpetual check against Tristan Stevens, while Anthony Hain beat Richard Voon, Jason Chew beat Max Chew Lee, Mark Vucak beat Gary Bekker & Cameron Yung beat Lee Forace! This left the top board clash between Jordan & Raine to decide the tournament. Jordan was an exchange ahead in an ending, but Raine fought on, but Jordan managed to finally win as the game approached the four-hour mark to clinch outright first in the event!
Final results, cross tables & a list of prize winners can be seen on ChessChat.
Below are a few photos from the event.
Playing hall with round 1 underway on Friday night 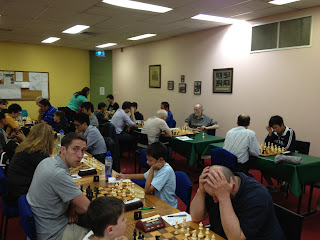 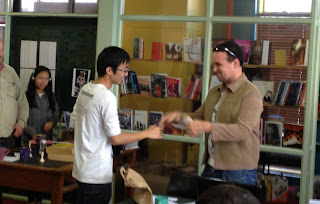 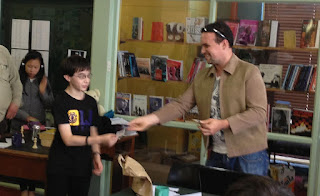 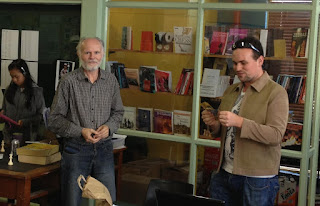