The 2013 Australian Open Chess Championships concluded with a new Open Champion being crowned. 15 year old FM Bobby Cheng from Melbourne had arguably his best result to date to take the title with 9.5/11, a point clear of GM Zong-Yuan Zhao & IMs Moulthun Ly & Max Illingworth. Cheng had won the World Under 12 Championship in 2009 & had been a regular finisher at the top of a number of strong events since, most recently finishing =1st in the Australasian Masters, but this result exceeded most expectations for Bobby for this event! The result was made even more spectacular when you consider that he started with a half-point bye as he could not make it to Sydney for round 1, so effectively gave the field a head start, yet still finished well clear of the field! The highlight of the final segment of the tournament for Cheng was his win over top seed GM Igor Khenkin!
The result also secured a second IM norm for Cheng, while his FIDE rating should pass the 2400 mark as a result of the tournament. This leaves Cheng needing just one more IM norm for the IM title. Canberra's Junta Ikeda also recorded an IM norm in the event. Other players who had strong performances included IM Andrew Brown (the only player to face all three GMs in the event), Yita Choong, George Lester, Zachary Loh, Pasan Perera & Jack Puccini.
I'm still in the process of finishing off my round review videos, but I will post them here when they are completed, although you can check my YouTube channel in the meantime to see them when they are first posted online.
At the closing ceremony, the various ACF medals were awarded for 2012, with the winners as follows:
Steiner Medal (Australian player of the year): IM Max Illingworth
Arlauskas Medal (Australian junior player of the year): Anton Smirnov
Koshnitsky Medal (Chess Administration): William Anderson Smith
Purdy Medal (Chess Journalism): Ian Rout 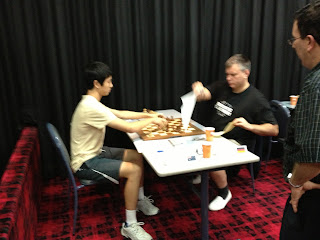 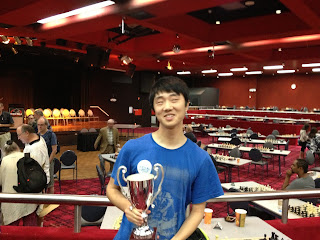