Round 4 of the 2013 Australian Open finally saw an outright leader emerge, with IM Max Illingworth again winning to take the sole lead on 4/4. All top 4 boards finished in draws, though some were more fighting than others, with FM Junta Ikeda 7 GM Igor Khenkin playing 101 moves before agreeing to a draw in a queen & pawn ending in their game.
Clubhouse leader in the unofficial 'T-shirt of the tournament' competition goes to Danish visitor Henrik Mortensen for this fantastic t-shirt he wore during round 4, which has a sentiment shared by many players in the room. 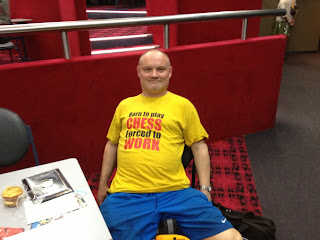 Strangest chess variation goes to IM Trevor Tao, who was demonstrating his creation of Rubik's Cube Chess in the analysis room, where players attempt to solve a Rubik's cube while playing a game of chess. The Rubik's Cube acts as the clock, with solving of the Cube only allowed while it is your opponent's turn. Victory can be claimed by Checkmate, solving the cube, or having your opponent resign. 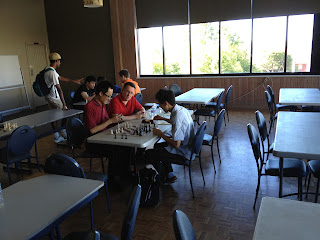 I have also continued with my round reviews, with my review of round 2 now online
Posted by MelbourneGamesCoach at 19:41