Its been a while since my last blog post ... and I'm still in the process of finishing off the last few round review videos from the Australian Open! However, I thought I should at least update the blog with a few things that have been happening of late, the first of which was a lecture by German GM Igor Khenkin at the Melbourne Chess Club a few days after the Australian Open finished in Sydney.
Before the lecture itself, Paul Cavezza, MCC Webmaster, Fight Club regular (as The Electric Eye Bye) & general techy chess guy sat down with Igor & recorded an interesting interview with him.


The lecture itself saw Khenkin going through his game with IM Max Illingworth from the Australian Open, as well as examining a few positions with the general theme of calculation. Khenkin comes across as a very personable character & was able to mix some humour with the chess content to make for an exciting lecture ... PLUS he did the lecture wearing a Hawaiian shirt, which certainly takes some courage! Overall it was very entertaining & informative ... and Khenkin said he would consider returning to Australia again in the future! 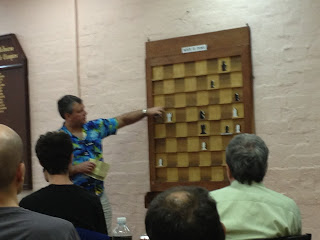 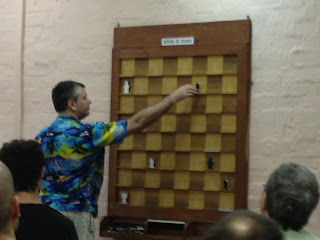