Day 1 was an interesting day, both on an off the chess board at the Australian Open Chess Championships today. The day started with the opening ceremony, featuring the usual speeches & formalities, but highlighted by two musical performances, a rendition of 'Love Never Dies' by Yvette Keong, accompanied by Oscar Wang, as well as a solo piano tune 'Tribute to the Yellow River' by Oscar.
Once the opening ceremony was out of the way, the usual dilemmas faced at the start of a big tournament such as this needed to be overcome, with a number of players arriving late, or needing to be contacted to ensure that they were on their way. Overnight it was learnt that IM Trevor Tao's flight from Adelaide had been cancelled & the earliest flight he could take to Sydney left at 3pm, so he unfortunately had to take a half point bye for round 1 & will be joining the tournament in round 2. Other players arrived & were checked off, however with over 150 players to sort out, the tournament proper did not get underway until after 2pm.
Once underway, it looked like it was unofficial Grunfeld Day on the top boards, with three of the top boards seeing some sort of Grunfeld position on them early on in the game. Most of the top seeds managed to make it through the round with wins, although FMs Greg Canfell & Chris Wallis both lost to lower rated opponents & will have to start their tournament recoveries a little sooner than planned. A number of games were also drawn.
In total, there are 112 players in the open, 50 in the Minor & 13 in the Classic, for a grand total of 175 players in the three events, which makes for a fairly sizable tournament.
Full results for the Open are available on Chess Results.
Results & pairings for all tournaments are available on ChessChat. 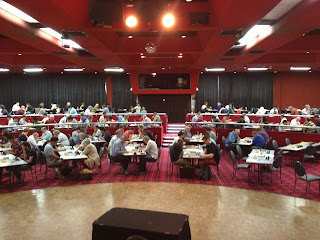 Play underway in the 2013 Australian Open! 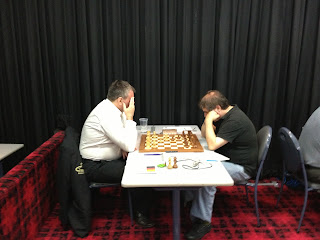 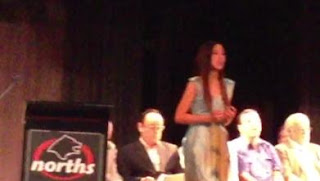 The video report I had hoped to do for round 1 is proving a little trickier than I imagined for a variety of reasons, but I'm hopeful (or at least optimistic) of being able to get something up tomorrow.
Posted by MelbourneGamesCoach at 07:19