The first round of the MCC Melbourne Cup Weekender saw 37 players ready to go on Friday night (with a few others joining the tournament on Saturday morning). The tournament is one of the strongest seen at the club in recent years, with 5 International Masters & 2 FIDE Masters playing & the top 15 seeds are all rated over 2000! There are also some interstate players participating, with players from Queensland, New South Wales & the Australian Capital Territory battling against some of Melbourne & Victoria's strongest players.
With the standard Swiss pairings pitting top half against bottom half, most matches saw a rating difference of 500 or more points. You would expect all games to be won by the higher rated player, however Tristan Krstevski managed to hold David Beaumont to a draw to be the exception to the rule, while the other top seeds all won. Many of the games were not as one-sided as the ratings would suggest, with Savithri Narenthran pushing Max Illingworth for over three hours, while Gary Bekker missed a possible drawing idea at the end of his game against George Xie.
With so many strong players in the event, round 2 sees a number of fascinating matchups already, including Ari Dale v Stephen Solomon & George Xie v Justin Tan on the top two boards, so if the top seeds are going to finish at the top of the field, they will have to work hard for their points!
Round 1 results are available on ChessChat. Pairings for future rounds will also be posted in the thread.

Main playing hall with games underway in round 1 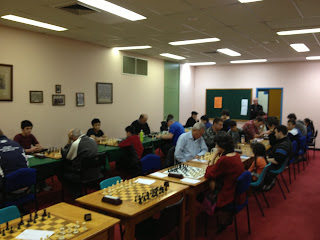 Top boards underway in round 1, including Solomon-Wildes on the DGT board! 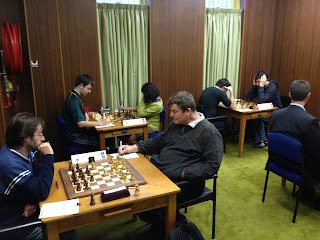 The most interesting game from round 1 among the top boards was the board 2 clash between Gary Bekker & George Xie, with the International Arbiter putting up a good fight against the International Master. Unfortunately for Gary, in the final position he did not see that 47. Bxd4 gives white good drawing chances, as the passed c-pawn ties black's king or bishop down in defense, while an exchange on h5 leaves black with a potentially bishop & wrong coloured rook pawn ending. Without these resources, the position is indeed winning for black & Gary saw that after any other bishop move (to c1, f2 or g1) that black's idea is simply to play d3-d2 & then bring the king in to secure the victory. As a result of these thoughts, Gary resigned, missing a fantastic opportunity to possibly draw against an International Master (or at the very least, make for a very long ending, which is tough to win).