Bob Brooking Round Robins Round 1

Tonight was the first round of the annual Bob Brooking Round Robin event at Melbourne Chess Club, which sees players split into groups of 6 by rating & then playing a round robin against those players. The format of the event makes for a very competitive event, with all games being (at least theoretically) very tough.
The tournament itself is named after Bob Brooking, former judge at the Victorian Supreme Court, as well a former President of Melbourne Chess Club. He has written an interesting history of Melbourne Chess Club in two volumes, Care for a Game & Play On, which you can read about on the MCC website. 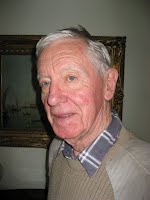 As for the event itself, there are 30 players in five groups this year, with the top division being particularly strong, with 2 IMs & all players rated over 2100! I'm on double-duty, playing in division 2, as well as acting as the tournament arbiter, but I will definitely have to be at my best if I plan to win my division, with Sylvester Urban, David Beaumont, Justin Penrose, Omar Khaled & Richard Voon all looking to spoil these plans of mine!
Full results, as well as the draw for future rounds, can be seen on ChessChat.

The best game of the round in the top division was an efficient game by IM James Morris against Karl Zelesco, where James left Karl with a bad black squared bishop & gradually improved his position until an exchange could further increase his positional edge.