Friday saw the final of the Chess Victoria Primary Open Schools competition played at Box Hill Chess Club. 110 players, representing 22 schools from around Victoria participated, including many of the best primary school players in the state. The semi-finals the previous week gave some indication of the teams who would likely be fighting for first place, however with the finals being played using a team swiss format rather than an individual swiss, this was sure to favour teams that could score highly across multiple boards.
Greythorn Primary got off to a fantastic start, winning their first three matches 5-0 to lead by 3.5 points & this was to prove to be an unassailable lead throughout the day, although by the conclusion of the day, this lead was only half a point! Greythorn managed to win all seven matches throughout the day, so deserved to be the winners, although the Mount View team almost caught them by the final round, finishing with two 5-0 results in the final two rounds. Deepdene were also in contention throughout the day, but never quite caught up to Greythorn & ultimately finished third.
Outstanding performances were achieved by Enoch Fan (board 1 for Greythorn) & Hamish Jones (board 4 for Mount View), who both scored a perfect 7/7! A number of other players also scored 6/7, most of whom won board prizes (although there were a number of board 2 players who scored 6/7), which are included in the full results on ChessChat.
As with the other winners, I would like to wish the Greythorn team all the best at the Australian Schools Finals in Canberra in early December.
Full results are available on ChessChat.
Unfortunately my phone died during the event, so I only have photos from the early rounds
Top 5 boards in action 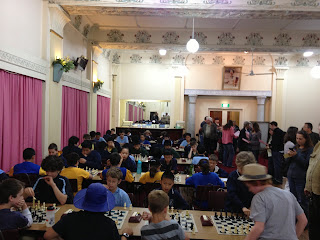 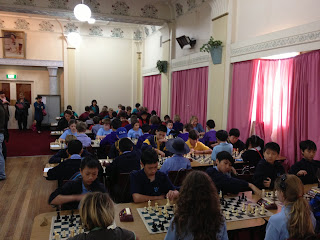 Plenty of teachers, parents & coaches watching the games in progress 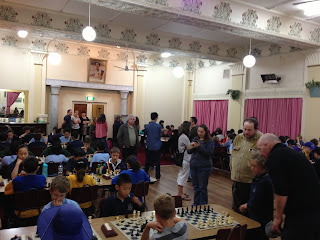