Day 2 of the MCC Melbourne Cup Weekender saw the top seeds start to meet, with results not always going according to rating, with only IMs Stephen Solomon & Max Illingworth, along with Luke Li being the only ones to emerge from the day on 3/3.
The club also hosted a number of other events simultaneously, with junior coaching in the morning & a small allegro event in the afternoon meaning all players were in the main playing hall for today's games.
The morning round was not without surprises, with Sylvester Urban beating Dusan Stojic, Jason Chew beating John Wildes & Ben Frayle beating Paul Cavezza. However the game that had the most interest online was the clash between MCC regulars David 'Firegoat' Beaumont & Richard 'Uncle Chop Chop' Voon, with the Goat taking the victory on this occasion!
The afternoon round was also drama-filled, with Luke Li beating George Xie after George's rook was surprisingly trapped early in the endgame. Jason Chew continued his good recent form with a win over Max Chew Lee, while a number of games were drawn, including Urban-Dragicevic & Kolak-Beaumont near the top of the field.
Results & pairings are avaialble on ChessChat. 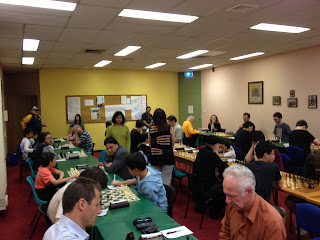 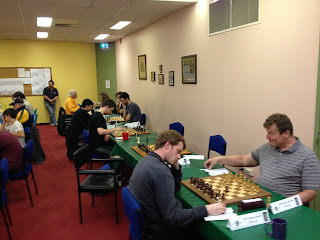 The game of the day was Luke Li's win over George Xie, with was decided when George's rook was trapped on the b-file in the early endgame & Luke demonstrated excellent technique to finish the game off.