Yesterday I decided to drop in to the ChessKids National Schools Finals, which were being played at Queen's College in Melbourne University in the city. I was mainly there to see how the kids from Penleigh Essendon Grammar were doing, as I have been coaching there this year & the kids have been very keen to learn & have all improved over the course of the two terms that I have been coaching there. Having said that, an event such as this is very much a step up from what the kids are used to, so it would definitely be a challenging event for them. The first day was tough for the kids, but they all managed to win at least one game from the four that they played today, with Ashleigh Craig being the standout with 3/4 on day one! Hopefully things go well for them on day 2 & they can finish with a proverbial wet sail!
The event itself is being held in a very nice venue, with a large, bright playing hall being the main focus. There was also a large analysis room available for players, which was also very nice. An extra touch that ChessKids offer at this event are lectures by some of the ChessKids coaches between rounds, so that the event is not just a chess competition, but also an opportunity for all the kids playing to learn more about the game & take away more than just seven score sheets & some memories, but also hopefully some skills and insights from some other coaches, which should lead to a better understanding of the game.
Below are some photos from the event
The main playing hall in between rounds 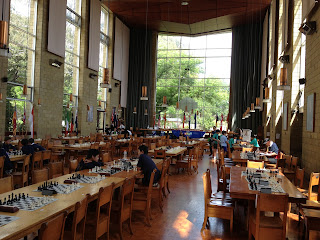 The smaller playing area for the girls even that becomes a lecture area between rounds, this time Anthony Hain is showing kids a game. 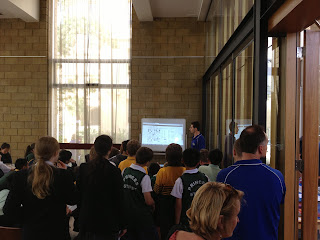 The analysis room between rounds, with IM Robert Jamieson giving a lecture. 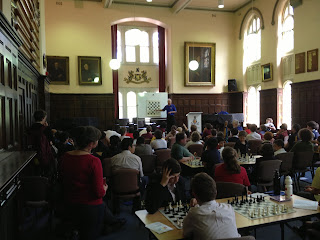 The main playing hall from the viewing gallery where parents & teachers were ushered to before the round started, leaving the playing area for players & arbiters only. 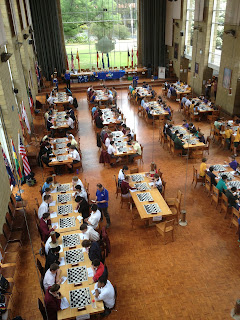 The analysis room mid-round, with plenty of games being looked at by players & coaches. 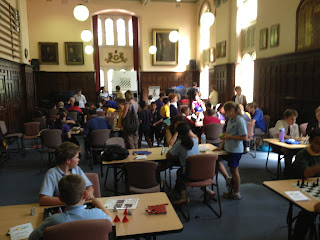 Here is a brief clip from one of Robert Jamieson's lectures, where he is looking at the game Zelesco-Illingworth from the 2012 MCC Melbourne Cup Weekender, and explaining how Karl missed an opportunity to draw the game against Max.