Sunday saw an eclectic gathering of people at Melbourne Chess Club, initially for the Victorian Blitz Championship in the early afternoon, and then later in the afternoon for the Chess Victoria Annual General Meeting.
The field for the Victorian Blitz Championships was a small but very strong one. Of the 19 players, there were 2 IMs & 2 FMs, with 10 players rated over 2000 ACF! The titled players ultimately dominated the event, establishing themselves as the top 4 from round 5 onwards, with only the order changing in the remaining rounds.
Ultimately it was James Morris who took out the event, with a very impressive 11.5/13, only losing to Bobby Cheng & drawing with Michael Baron. Baron & Cheng shared second place with 10.5/13, with Michael being the only player to go through the tournament undefeated. Leonid Sandler was 4th with 10/13.
Full results are available on ChessChat.
I also took a few photos & videos during the day.
Playing hall with games underway 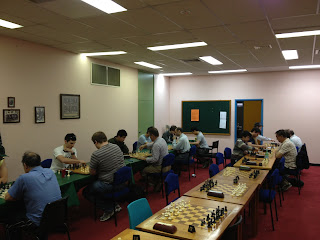 Top boards in action - this time in round 3 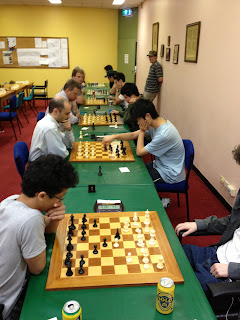 Richard Voon was among the spectators during the day 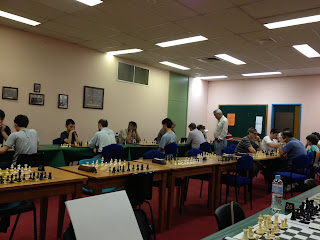 Top boards underway in the final round 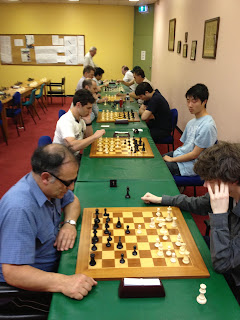 Other boards during round 13 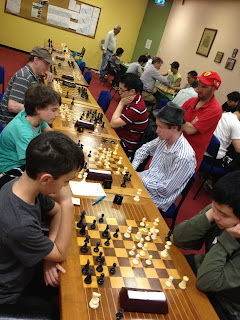 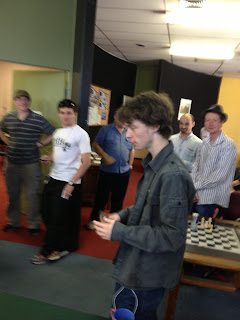 I also took a few videos throughout the day, which can be viewed on my YouTube page.
Below is the most exciting of them all, the round 6 clash between IM James Morris & FM Michael Baron, which had a controversial finish!