Yesterday afternoon I again stopped by the ChessKids National Schools Final to see how the kids from Penleigh Essendon Grammar were doing. For the most part, the kids did very well. One of the big differences about this event and the average school event is that rather than only having a handful of students who play regularly at chess clubs in the event, as you would have at an ordinary schools competition, you have a large portion of the field who are regulars at clubs like Box Hill, Melbourne, Noble Park & other chess clubs around Melbourne. It also shows how much difference playing at a club makes, as these players are used to playing against tough opposition, have faced difficult positions & have in general just played more chess than those who have played the vast majority of their chess in the school environment.
With this in mind, the PEGS kids did very well. The girls team finished 3rd overall in a tough, but disappointingly small girls competition. The top scorers in the team all scored 4/7, which is an excellent effort in such a competition. The boys team also fared well, coming 5th overall out of 13 teams & collecting the trophy for finishing second out of the Middle Years teams, just 1.5 points behind Melbourne High (who had the very experienced Allen Yu leading their team). Once again, the top scorers for the team all scored 4/7 & even those who may not have had the best tournament still managed at least 2.5/7.
There were few surprises at the top end of the tournaments, with Glen Waverley taking out the Secondary competition (with 5 kids who are all regulars at chess clubs), with Bobby Cheng winning the individual tournament. Greythorn won the primary section, with both Enoch Fan & Tristan Krstevski scoring 7/7, while Deepdene won the girls section, with Alanna Chew Lee scoring 7/7.
As far as an overall impression of the tournament goes, there were three things that stood out for me that ChessKids had done well - the venue at Queen's College was excellent, with a large, bright room, with a separate area for parents & teachers where they were could be out of the playing area, but still able to see the games in progress. The lectures & coaching in between games is something that helps add something to the event & make it much more than simply a chess competition & gives all students something to take from the event. The third thing that was done well was simply that all the ChessKids staff were wearing their blue tops with the company logo, so that it was easy to identify who the arbiters & organisers were, particularly with so many parents & staff at the event. That's not to say that the event was without negatives, but these were the things that stood out for me that separated this event from other school events I have attended in recent years.
Of course I took a few photos while I was there ...
The outside of the playing hall 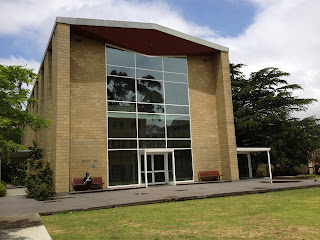 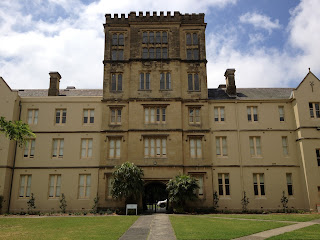 Trophies for the winners 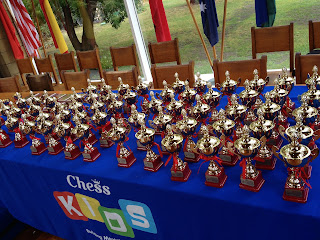 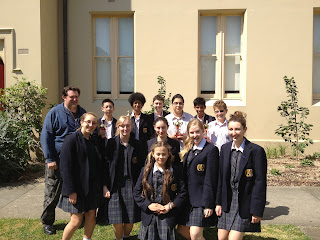