The answer to yesterday's question was no, as IM James Morris continued his winning ways on day 2 of the MCC Allegro Championships, eventually taking out the tournament with a very impressive 12.5/13! Jesse Jager, who had lost to James in round 4, managed to win his remaining games & finished in second place on an impressive 12/13. Michael Baron finished 3rd after having a disappointing tournament by his standards.
The final cross table & a list of prize winners is available on ChessChat.
The concluding stages of the Baron v Morris clash yesterday from round 5

Play underway during day 2 of the Allegro Championships 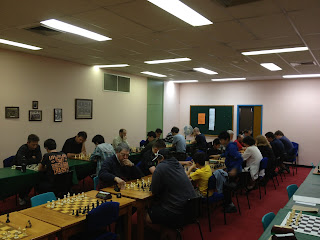 After the tournament, some of the players decided to play blitz on the street out the front of the club! 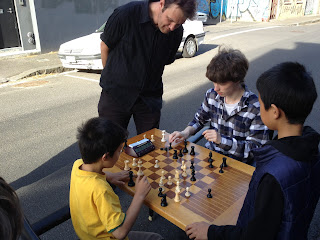