Day 1 of the annual Melbourne Chess Club Allegro Championships saw 32 players participating, with many MCC Allegro regulars looking for their chance at the $200 first prize on offer! The obvious favourites were FM Michael Baron (now sporting an allegro record 2794 rating!) & IM James Morris, who have between them won almost all the allegro events held in recent years!
These two were not to have things all their own way, with Jesse Jager claiming an upset win over Baron in round 6, after Baron & Morris had drawn their round 5 clash. Tony Tosevski was perhaps the best performer on day 1, with wins over Luke Li & David Garner, but will he be able to keep this good form going on day 2.
A cross table after round 7 is available on ChessChat, but the big question for the day will be if anyone can stop James Morris from claiming yet another title in 2012.
Below are some photos from the event 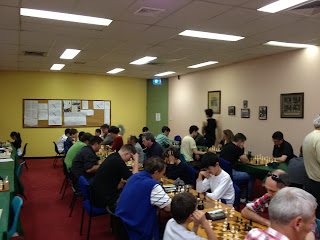 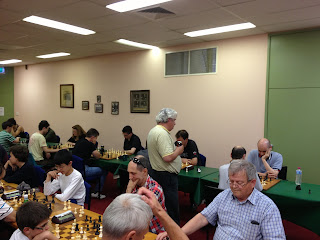 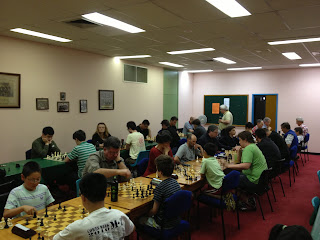