Yesterday saw the second of the Chess Victoria Primary Schools Semi-Finals played at Club Tivoli in Windsor, this time with 179 players from across Melbourne & Geelong. Once again, many of the best primary school players in the country were in attendance, including Luis Chan, Kris Chan & Alanna Chew-Lee, amongst others. As with yesterdays event, the favourites once again filled the top placings, with Kris Chan taking individual honours with 7/7, his brother Luis finishing second with 6.5/7 & Alanna Chew Lee headed those on 6/7 to also be the best finishing girl. Ryan Lumpreiks also had an excellent tournament, being the only player all day to take any points from the Chan brothers, after drawing his round 7 game with Luis, as well as being the only player other than the Chan brothers not to lose a game all day!
In terms of the team results, Mount View & Deepdene were the the class teams of the field, finishing with 31.5 & 28.5 points respectively, which was 5 points ahead of the schools in third place!
This sets up an exciting Final, with a number of schools very closely matched at the top of the field, with Mount View, Greythorn, Ivanhoe & Deepdene being the teams most likely to take out the title. Will the team format help or hinder some of these schools? We'll find out on November 9 at Box Hill Chess Club, where the top primary schools will battle it out for a place in the National Final in Canberra.
Full results from the day are available on ChessChat.
Also, with a number of teams finishing tied for potential qualifying places, there may be 2 extra teams added to the final (potentially 22 teams instead of the intended 20 teams), though this is to be confirmed by Chess Victoria in the coming days.

Below are some photos from the day:

The room was once again full for semi-final 2! This photo is taken at the opposite end of the room to the other photos 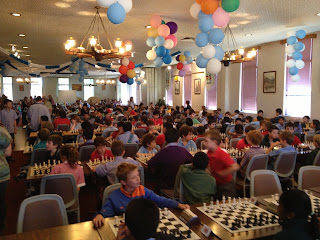 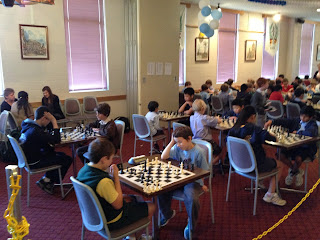 Another view of the venue with a round just underway 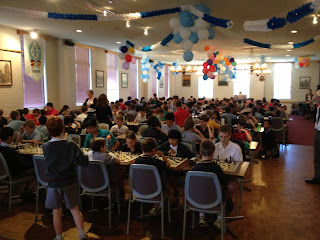 A small canteen, with hot chips, hot dogs and other snacks was available during the day 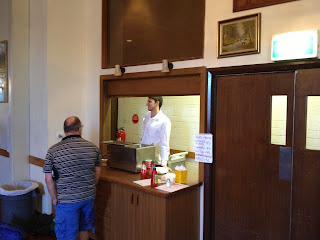 Top boards ready to go in the final round 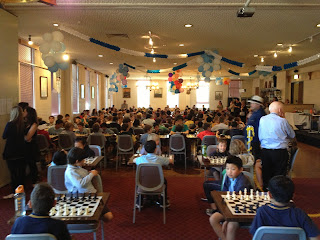 Final round underway, with the players on the top boards in deep concentration 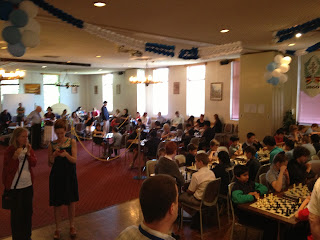