Tuesday saw the finals of both the Secondary & Primary Girls Schools finals being held at Lauriston Girls School, where I was once again an arbiter, along with Leonid Sandler & Tony Davis. As with the Secondary Open even the previous day, this event featured two strong tournaments, with the Secondary event including players such as May Foo, Zhi Lin Guo & Janaki Narenthran in the 56 player field. The Primary event was also strong, with Alanna Chew Lee, Phoebe Fan & Emily Lin being some of the more fancied players in the 102 player event.
Both events featured a number of excellent performances, along with upsets & surprises. The two standout performances were from May Foo in the Secondary & Emily Lin in the Primary, with both players winning all their games to finish on 7/7, which is a fantastic result in such a tough event. In the Primary event, the best surprise performances were from Jamiee Renshaw, who scored 6/7, only losing to Emily in the final round & Alexandra Irvine, whose 5/7 included a win over Alanna Chew Lee and a 5/5 start before losing her last two games. The standout surprise results in the Secondary event were from Shanaya Mendis, whose 5.5/7 included a win against Deborah Chong & a draw with Janaki Narenthran, while Xuan Le's 5.5/7 saw her hold Zhi Lin Guo to a draw in the final round.
In terms of team results, PLC managed to win both divisions, albeit by slim margins, just one point ahead of Mac Robertson in the Secondary & half a point ahead of St Andrews in the Primary!
I also took a few photos on the day, which you can see below

Secondary Girls tournament, along with the top few boards of the Primary Girls event 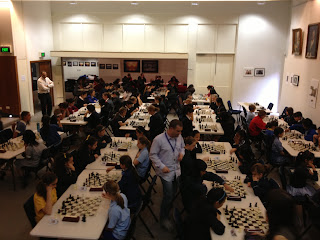 The other boards in the Primary Girls event 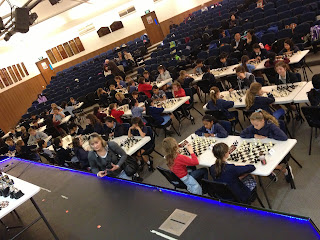 The winning teams from PLC, with the Secondary team in the front & the Primary team at the back 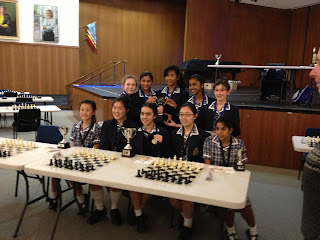