This year the Australian Championship is being held at the Springvale Town Hall in outer south-eastern suburbs of Melbourne. I am the chief arbiter this year (which will also hopefully count as my final International Arbiter norm) & am working alongside Peter Tsai & Scott Crowley.
A massive field has assembled for the event, with 42 players in the Championship division (including 3 GMs, 1 WGM, 10 IMs, 9 FMs & 1 CM), 93 in the Reserves (including 2 WIMs, 1 FM, 2 CMs & 1 WCM) & 57 in the Challengers, which at a total of 192 players is possibly a record for the Australian Championships!
The opening ceremony saw speeches by Councillor in the City of Greater Dandenong Roz Blades, ACF President Gary Wastell & head of the organising committee Dusan Stojic. Gary Wastell's speech was particularly moving, paying tribute to the unusually large number of the chess community who have passed away in 2013, describing 2013 as an annus horribilis for Australian Chess. Of those that I knew personally, Andrew Saint, Peter Parr, Max Fuller & Hannibal Swartz were the ones I knew best, although I also met Haydn Barber, Malcolm Tredinnick & Henk Jens, but knew of most of the others that Gary mentioned, even if I had not met them personally.

Tournament hall before the start of play 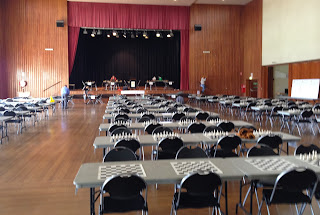 The opening ceremony started a little later than planned & went for longer than expected, so that the round 1 games did not commence until just after 1:30, about 30 minutes after the scheduled starting time.
Of course as is usual with chess tournaments, things did not always go smoothly on the chess board for everyone & there were a number of upsets, particularly in the Championship division. Notable upsets saw Eddy Levi beat Igor Goldenberg, David Castor beat Aleks Wohl, Zachary Loh beat Bill Jordan & Justin Penrse beat Andrew Brown. Domagoj Dragicevic, Laurence Matheson, Laurent Michaille & Svetozar Stojic also held their higher rated opponents to draw in the first round.
Round 2 already sees a number of exciting pairings, highlighted by the clash of promising juniors Anton Smirnov & Bobby Cheng, although there are also a number of clashes between titled players at this early stage of the event.
Full results of the Championship, Reserves & Challengers are available on the official website & there's also discussion of the event on ChessChat. Pairings & other information about the event are also available in both these locations. ﻿

Playing hall with games underway. The hall comfortably holds the almost 200 players & there is also a viewing gallery at the end of the hall that can be seen at top of the photo. 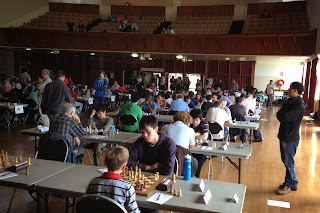 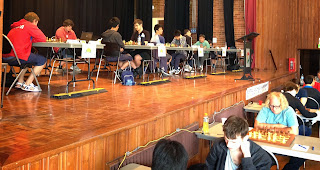 Once again Gary Wastell has prepared his board for the Championships displaying the pairings & results. 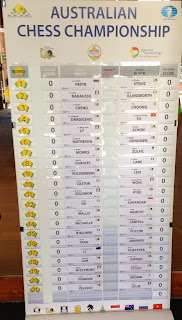