The Australasian Masters came to an interesting conclusion just before Christmas. From the outset, Latvian GM Normunds Miezis had been a runaway leader, but all that changed in the final rounds of the Australasian Masters! After starting with 5/5, his progress was slowed by draws against GM Vasily Papin & FM Anton Smirnov, but few would have expected the finish to the event, with Miezis losing to both IM Bobby Cheng & IM Max Illingworth in the final two rounds to finish on 6/9. However, such was his lead that this was enough to win the tournament, albeit in equal first, shared with Russian GM Vasily Papin who went through the event undefeated. Vietnamese GM Tu Hoang Thong finished in outright third on 5.5/9 to ensure that all the prize money went to the visiting Grandmasters. As far as the Australians were concerned, the best results were from IMs Bobby Cheng & Max Illingworth, who finished on 5/9 in a tie for fourth place, while FM Anton Smirnov impressed with his solid play, but a final round loss to Bobby Cheng saw him miss out on his final IM norm by just half a point.
The IM norm event on the other hand saw to players leading the field throughout the tournament - FM Chris Wallis & Karl Zelesco were the leaders throughout the event, sometimes tied, other times in first & second place, but they finally both finished on 7/9 to share the prize money (Karl won the trophy on countback). The 7/9 score was the minimum required for an IM norm & Karl Zelesco earnt his first IM norm as a result of his performance in this event. Chris Wallis was slightly less fortunate, with his high rating (and subsequent lower rating of his opponents) counting against him, so that it was not possible for him to get a norm, regardless of his final score. However it was an impressive tournament from Chris, who was the only player to go through the event undefeated. FM Bob Smith finished outright third on 6/9, while IMs Vladimir Smirnov & Andrew Brown were equal fourth on 5.5/9.
Overall the tournament was a breeze to run, with all players being very friendly & co-operative, with no major issues.
Hopefully this can be the beginning of something more regular in Australian chess, rather than simply a one-off special for the 25th event - Australia now has a significant number of International Masters, but still very few progress beyond this level to become Grandmasters & tournaments like this provide fantastic opportunities for aspiring GMs to test their skills against the very best.

Full details of the tournament can be found in the 2013 Archive on the Box Hill Chess Club website, including Cross Tables, Bulletins & PGN files of games

Leonid Sandler also managed to do a few more videos with some of the participants & I have included them below:


A few photos from the tournament & prize giving: 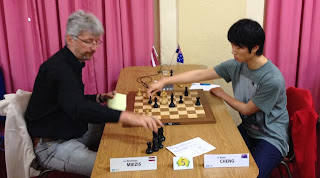 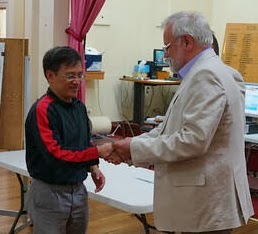 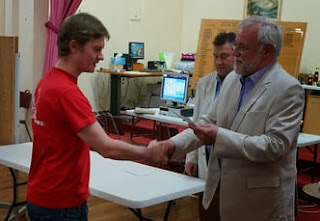 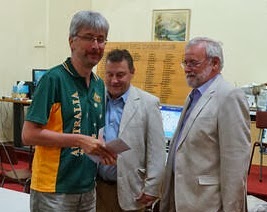 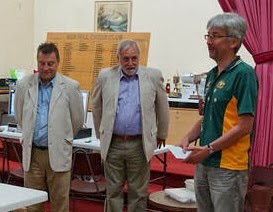 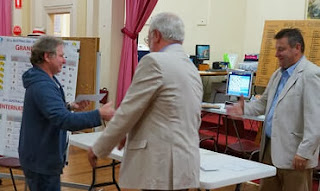 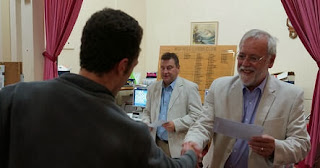 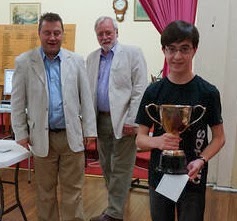 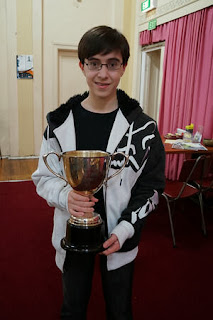 Karl Zelesco with the perpetual trophy & a smile after securing his first IM norm!

GM Event
Miezis-Cheng from round 8

Hopefully this will be the first of many such GM-events in Melbourne (or even Australia more generally) rather than just a one-off event!
Posted by MelbourneGamesCoach at 15:00