The Victorian Primary Open final saw 22 teams of 5 from various parts of the state (though mostly from suburban Melbourne) fight it out for the title of Victorian Primary Schools Champion at Box Hill Chess Club. Looking at the event on paper before the games started, it looked like it could become a competition for second place & that is exactly how the event turned out, with Mount View Primary running away with the event, scoring an extremely impressive total of 33.5 out of a possible 35 points.
Of course it came as no surprise to see that Mount View also managed to scoop all the board prizes - Kris Chan taking board 1 with 6.5/7 (on tiebreak ahead of David Cannon); Luis Chan won the board 2 prize with 7/7; Hamish Jones took out board 3 also with 7/7; Leon Chen won board 4 with 7/7; Alex Fan won the board 5 prize with 6/7 (on tiebreak ahead of Rowan Mikosza);
The fight for second place ended up in favour of Waverley Christian College, who finished a few points ahead of Deepdene in third place.
To give you an idea of how close the competition was, Wesley Elsternwick finished in fourth place on 20 points, just missing out on the medals, yet there was only 5 points (the maximum available for one round) separating them from Winters Flat & Great Ryrie, who finished with 15 point in a tie for 16th place!
Hopefully Mount View can continue the recent trend of Victorian Primary School teams & take out the Australian Final, to be held on the Gold Coast in about a week's time. I'll take a look at the event in a little more detail in a separate post, but I would expect another strong showing from the Victorian teams, particularly in the Open division events. 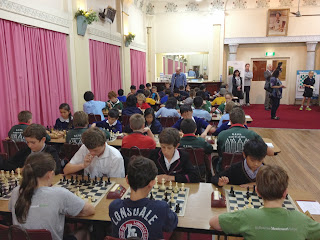 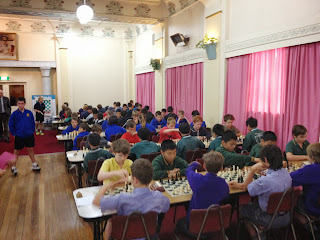 The other half of the playing hall - 110 players in total! 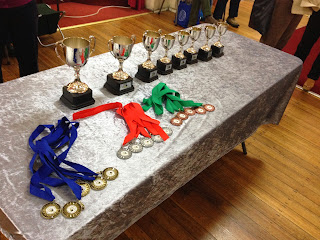 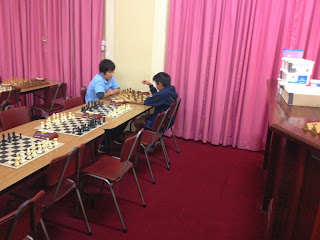 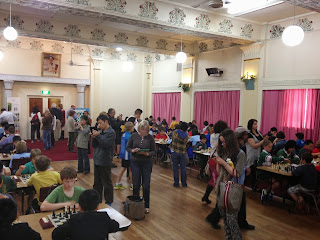 Plenty of parents & teachers were on hand to watch the action 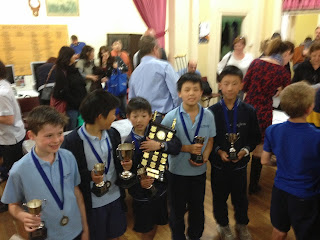 The winning team from Mount View Primary with their hands full of trophies! 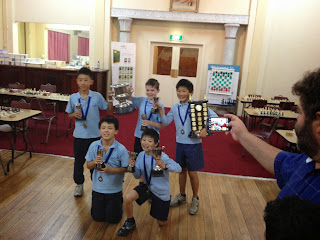 The Mount View team with both the Victorian & Australian Schools trophies - hopefully the silver cup will return with them from Queensland!
Posted by MelbourneGamesCoach at 01:19