This year the Victorian Blitz Championships moved to the Box Hill Chess Club after being held at the Melbourne Chess Club for the previous few years. The change of venue helped increase the number of players, with 36 turning up for this year's event (up from 19 last year at MCC). The top end of the field was also very strong, with plenty of titled players including IMs Bobby Cheng, James Morris, Leonid Sandler & Ari Dale, as well as FMs Luke Li, Dusan Stojic & Domagoj Dragicevic.
As is standard in chess events with fast time limits, there were plenty of upsets throughout the day & these started in the first round with Sylvester Urban beating Leonid Sandler. Round two saw more upsets, including David Beaumont beating top seed Bobby Cheng, Karl Zelesco beating Luke Li & Dominic Lai beating Marko Grabovac. Round three saw more upsets, with Mukesh Krishnamurthy beating Ari Dale, David Cannon beating Jack Puccini, Elliot Renzies beating Ray Yang & Moksh Goswami beating Reginald Chong, while in round four Karl Zelesco beat Laurence Matheson & Tanya Kolak beat Ray Yang. This left James Morris & Karl Zelesco as the only players who had won all their games & this would be the top board clash in round five. Karl continued his fantastic start to the event & beat James to take the sole lead, while the only other major upset win for the round was recorded by Dimirty Partsi over Luke Li. Round six saw Karl continue his winning ways with a victory over top seed Bobby Cheng, while Laurence Matheson beat Leonid Sandler to move to 5/6 to be Karl's closest competitor. Other upset wins in round six were recorded by Max Chew Lee over John Nemeth, Michael Chan over Dusan Stojic, Philip Drew over Svetosar Stojic, Paul Cavezza over Zachary Loh & Tanya Kolak over Shane Lawson. Round seven saw Dimitry Partsi become the next to fall to Karl Zelesco, while upsets were recorded by Michael Chan over Luke Li, Jack Puccini over Eugene Schon & Dominic Lai over Mukesh Krishnamurthy. Round eight saw Karl stretch his lead over the field to two points, after he chalked up another win, this time over Michael Chan, while Bobby Cheng beat Laurence Matheson to join Laurence in equal second along with James Morris. Upsets this round were recorded by Max Chew Lee over Dusan Stojic, Jack Puccini over David Beaumont & Paul Cavezza over Barbaros Kara. Round nine saw the potential picket fence come to an end, with Leonid Sandler handing Karl Zelesco his first defeat of the tournament. The chasing pack moved to within one and a half points of Karl after Bobby & James drew their clash, while Domagoj Dragicevic & Leonid Sandler joined them in second place on 6.5/9. The only major upset for the round saw Moksh Goswami beating Dominic Lai. Round ten saw Karl beat Domagoj Dragicevic, while both Bobby Cheng & James Morris won their games to remain within a point and a half of Karl. Upsets for the round included Jack Puccini beating Dusan Stojic, Zachary Loh beating John Nemeth & Matthew Clarke beating Shane Lawson. Round eleven saw Karl win again, this time against Sylvester Urban, while Bobby & James both won to remain close to Karl. Upsets for the round included Michael Chan beating Dimitry Partsi, Dominic Lai beating Reginald Chong & Moksh Goswami beating Shane Lawson. Round twelve saw Karl Zelesco secure the title with a win over Max Chew Lee, while Bobby Cheng won to remain a point and a half behind, but James Morris was held to a draw by Michael Chan to be two points behind Karl. Upsets for the round saw wins by Jack Puccini against Laurence Matheson, Sylvester Urban against Domagoj Dragicevic, Zachary Loh against David Beaumont & Moksh Goswami against Elliot Renzies. With the title wrapped up, Karl finally lost another game, this time to Jack Puccini. Both Bobby Cheng & James Morris won their games to finish in second & third place respectively. Leonid Sandler won his game to finish in fourth place, with only half a point between each of the top four places. Sylvester Urban finished with 7.5/13 to win the prize for the first rating group (no doubt helped by a surprisingly low ACF Quick rating), while the second rating group prize was shared between David Cannon & Dominic Lai on 6/13. Amazingly, other than the top board, there were no major upsets in the final round!
Well done to Karl for a fantastic performance. His chess was solid, but he was also often able to capitalise on his opponent's tactical errors when an opportunity presented itself. His time management also helped him in a few games. Bobby, James & Leonid would all be disappointed not to win the title, although they finished in the prizes, as would be expected from players of their ability. Laurence Matheson was another player who was unlucky to miss out on a prize, with his quick calculations & time management serving him well in many games, particularly early in the event. Others who outperformed their Quick ratings significantly were those who were under-rated to begin with - Sylvester Urban, Michael Chan & David Cannon being the most notable of these players.

From an arbiter's perspective, there was really only one incident of note in the event & I'd be interested to hear the opinions of other arbiters about the situation. I was watching the end of another game while this incident was in progress, so did not see exactly what transpired, although most things about the situation are not in dispute.
With only a few seconds left, player A moved his bishop to put his opponent's king in check. In response, player B moved his rook, leaving his king in check & pressed his clock. This is when the commotion started & I came over to the board. When I arrived at the board, player A's clock displayed 0.00 showing the flag, indicating he was out of time (the player thought they had a few seconds left when the illegal move was made, but obviously did not stop the clock while they still had time). Player B still had some time left on his clock (from memory about 3 or 4 seconds). The decision I made was that the game would be a draw - my logic being that although the claim of an illegal move may have been correct, for it to be a valid claim, the person making the claim needed to have some time remaining on their clock. In essence, I saw it as both players being in a situation where they could not win the game (either having no time, or having completed an illegal move in blitz), so I awarded a draw.
Geurt Gijssen addressed a similar situation in two of his An Arbiter's Notebook columns, with a somewhat strange response in each case. The relevant columns are here and here & the ruling that Gijssen seems to favour is that whoever is the first to make a claim (as long as it is correct) is the winner. To me this doesn't make sense & I still consider my decision to be one that was reasonable in the circumstances, as in another related situation where one player is making a claim to the arbiter (for example claiming a win on time in a blitz game), the player making the claim needs to have time on their own clock for the claim to be awarded.
What do other arbiters think of this ruling? How would you rule in these circumstances?

Final results and a full cross table are available on the Chess Victoria website.

Top boards in action at the Box Hill Chess Club 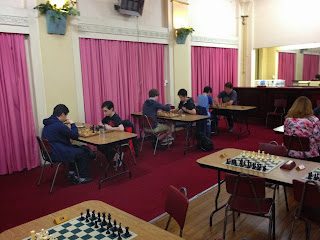 The playing hall - not filled to capacity, but a good size field for this event 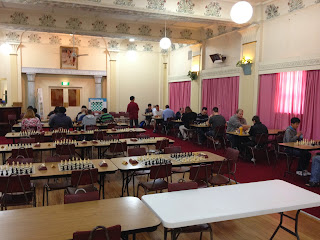 Another view of the top boards 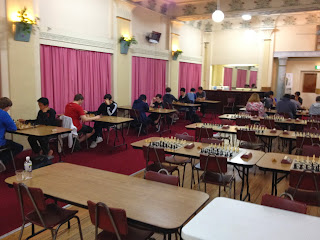 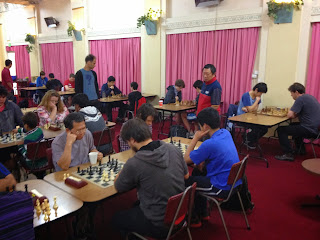