The final day of the Andrew Saint & Hannibal Swartz Memorial saw GM Normunds Miezis continue his dominance over the field to finish outright first with 6/6, one and a half points ahead of a group of seven players who tied for second place.
Round 5 saw FM Dusan Stojic become the latest victim of GM Miezis, while upset wins were recorded by Rad Chmiel over Miodrag Milojevic, Jason Chew over Bill Kerr, Ray Yang over Richard Voon, Regan Crowley over Zhi Lin Guo, Vishal Bhat over Surjeet Singh & Michael Yeoh over Jean Watson.
The final round saw FM Domagoj Dragicevic take his turn against GM Miezis, only to come up short, with Normunds finishing with a perfect six out of six. Finishing in equal second place were FM Dusan Stojic, FM Bill Jordan, Svetozar Stojic, Eugene Schon, John Nemeth, Simon Schmidt & Malcolm Pyke, who all won or drew their final games for finish on 4.5/6. Final round upset wins were recorded by Ray Yang over James Cameron, Dominic Lai over Zhi Lin Guo & Simon Dale over Surjeet Singh.
The final cross table is available on ChessChat, as are the list of Prize winners
There's also plenty of photos from the tournament on the Facebook Page

Plenty of players stayed around for the presentation, with free pizza on offer & the presentation included not only the usual awarding of prizes, but the official unveiling of two plaques at the club dedicated to Andrew & Hannibal. With so many players remaining, it also offered a rare opportunity for a photo of participants in the tournament (as well as a few extras). 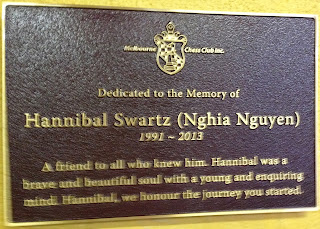 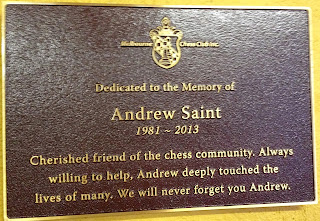 Post-tournament photo out the front of the Melbourne Chess Club 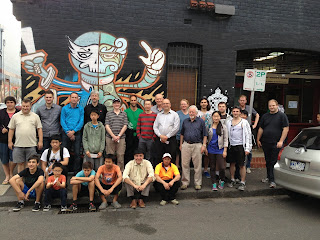 Some interesting games from day 3


A round 5 game of missed opportunities between Tom Kalisch & Justin Penrose that finally ended peacefully.


An exciting round 6 game between Simon Schmidt & Tom Kalisch


A few photos from the final day 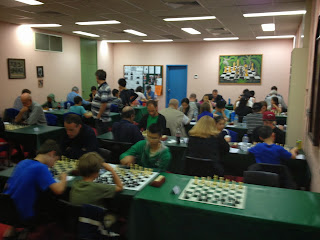 The last game of the tournament to finish - Cheng Dai v Stephen Worthley, which ended in a draw when Stephen was able to demonstrate the Philidor defence in a rook endgame. 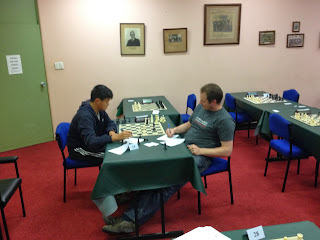