Day 2 of the Andrew Saint & Hannibal Swartz Memorial saw the cream rise to the top, with GM Miezis being the only player to survive the day with a perfect score.
Round 2 saw no upset wins, but a number of strong players were held to draws by players rated significantly lower than them. Those who drew with higher rated opponents were Max Chew Lee, Anthony Hain, Narelle Szuveges, Jack Hughes, Gary Lin & Vishal Bhat.
Round 3 saw GM Miezis take the sole lead on 3/3 after defeating Svetozar Stojic. Upset wins were recorded by Max Chew Lee over Miodrag Milojevic, James Cameron over Gary Bekker & Simon Dale over Ben Frayle.
Round 4 saw GM Miezis defeat FM Bill Jordan to retain the lead. Dusan Stojic, Domagoj Dragicevic & Thai Ly all won their games to stay half a point behind on 3.5/4. Upset wins were recorded by Thai Li over Dimitry Partsi, Bobby Yu over Anthony Hain & Michael Hain over Geoffrey Barber.

Some interesting games from day 2

Worthley v FM Jordan from round 2


Pykev Grabovac from round 4 with a nice tactic to finish


A wild game between Hain & Barber, also from round 4, ultimately decided when 46... Qf8 was NOT checkmate! 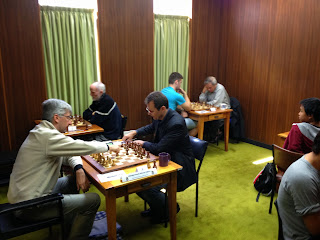 Main tournament hall during round 3 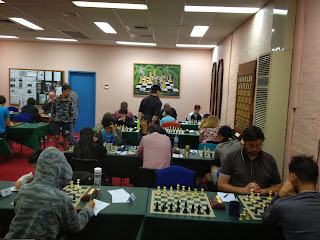 Another view of the main tournament room during round 3 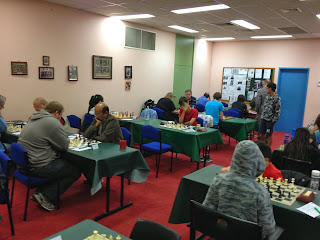 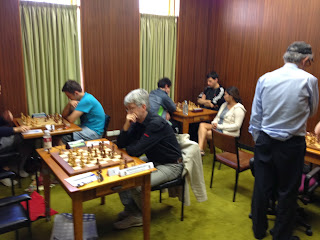