The 2013 edition of the Melbourne Cup weekender was stronger than previous years, with a bigger field of 64 players taking part over 5 days. The field was headed by Olympiad representatives International Master Max Illingworth from Sydney & International Master Stephen Solomon from Brisbane. They were the main interstate challengers who faced the local masters, IMs James Morris, Igor Goldenberg & Ari Dale, FMs Luke Li, Bill Jordan, Dusan Stojic & David Hacche, along with many other hopefuls, both from Melbourne, regional Victoria & interstate.
Ultimately it was young FM Luke Li who prevailed, scoring an undefeated 7.5/9, closely followed by IM James Morris on 7/9 & IM Igor Goldenberg & FM Bill Jordan on 6.5/9. Luke's victory was particularly impressive, with wins over top seeds Illingworth, Solomon & Morris & had he played enough non-Australian opponents, his performance would have been good enough for an International Master norm (though without the foreign players, this was unfortunately not the case). James returned to some of the form he had displayed towards the end of 2012 & although he was disappointed with his loss to Luke & his inability to convert an advantageous position against Bill Jordan into a win, he can be satisfied with a solid second in a tough field, highlighted by a nice win over Igor Goldenberg. Bill Jordan had a good tournament, with a victory over Stephen Solomon being his highlight, while Igor Goldenberg had a solid result to finish in a tie for third.
Others who had memorable tournaments included MCC favourite Paul Cavezza, who won his rating division with a score of 6/9, which included wins over Mehmedalija Dizdarevic, Andrew Footner & Dimitry Partsi. Rowan Willathgamuwa was another who performed above his rating & his 5/9 included a win over Mehmedalija Dizdarevic & draws with Michael Addamo & Tom Kalisch. Bobby Yu also had some impressive results on his way to 3.5/9, including a win against Chris Kolak & draws with Gary Bekker, Savithri Narenthran & Andrew Footner.
There was also a Brilliancy Prize on offer during the event & deciding on a winner (in conjunction with club treasurer Pano Skiotis) was not an easy task. Ultimately the winner was Stephen Solomon for his win against Anthony Hain from round 7, although Paul Cavezza's round 9 win over Dimitry Partsi & Jack Puccini's round 8 win against Dusan Stojic were not far off the top prize either.
Here is Stephen's win over Anthony again if you missed it on an earlier post.

The final cross table is on ChessChat.
Finally some photos from the presentations 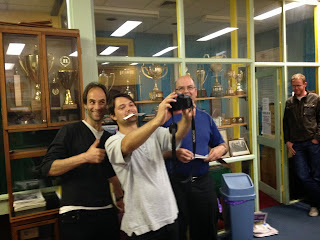 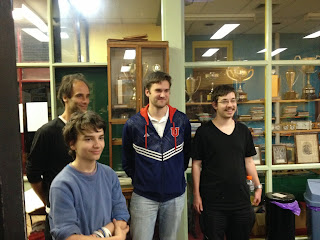 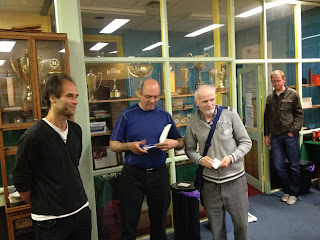 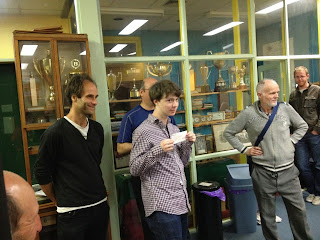 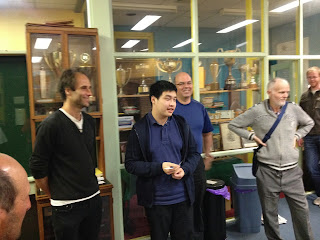