Day 2 of the Melbourne Cup Weekender at Melbourne Chess Club saw the field grow in size to a very chess-related 64 players & a playing hall that was filled to near capacity!
Round 2 saw the top seeds successfully negotiate their games to leave 13 players with 2/2, although not entirely without problems, with Sam Low (who is playing his first rated tournament for a number of years) pushing Max Illingworth, before finally succumbing in the knight v bishop ending that ensued. The round also had a few upsets, with Ray Yang beating Kevin Willathgamuwa, while young Licia Yao held Gary Lin to a draw. 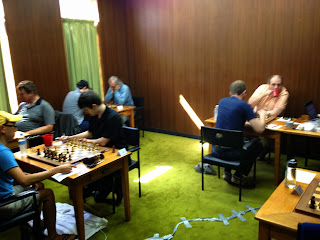 Top 5 boards underway in round 2 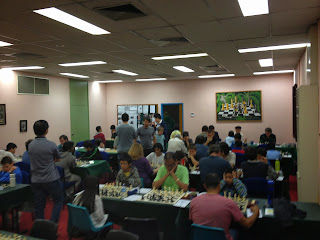 The board 1 clash between Max Illingworth & Sam Low


Following the completion of the round, the club became even more crowded as the regular Saturday afternoon allegro ran with 16 players in close quarters in one of the smaller rooms in the club. The event was once again taken out by FM Michael Baron with 7/7 - he is a regular at the allegro events & rarely plays longer games these days, but is still a tough competitor! 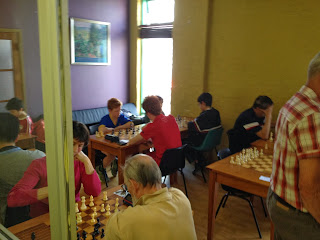 Round 3 was the most dramatic of the tournament so far, with the two top seed being beaten in their games, while other games saw enterprising chess, as well as some more upsets. Once the round was completed, only 5 players had managed to keep the picket-fence alive & move to 3/3.
Upsets for the round saw Dusan Stojic beat Max Illingworth, Bill Jordan beat Stephen Solomon, Calvin Bennet beat Max Chew Lee, Christopher Lim beat Heath Gooch & Dai Cheng beat Vladimir Zacharczenko. There were also plenty of draws this round, with Zachary Loh holding Luke Li to a draw, Goran Ilic drew with Marcel Rothlisberger, Savithri Narenthran drew with Andrew Footner, Marko Grabovac drew with Mehmedalija Dizdarevic, Rowan Willathgamuwa drew with Michael Addamo, Ray Yang drew with Tom Kalisch & Bobby Yu drew with Gary Bekker.
The prize pool was also finalised, with $700 for first & over $2500 in total prizes, which once again makes it the richest event at the club for the year.
As usual, results are available on ChessChat.