Day 1 of the Melbourne Cup Weekender at the Melbourne Chess Club saw 54 players start, with more to begin on Saturday morning. The long-awaited air conditioning was installed in the days before the weekender, so the playing hall was able to remain cool ... so much so that a few players made the rarely heard summertime complaint of the room being too cold!
Top seed for the event is defending champion IM Max Illingworth from Sydney. Other titled players in the event include: IM Stephen Solomon from Queensland, IM James Morris, IM Igor Goldenberg, FM Luke Li, IM Ari Dale, FM Bill Jordan, FM Dusan Stojic, CM Jack Puccini, FM David Hacche, CM Gary Bekker & WFM Savithri Narenthran. There are a total of 14 players rated over 2000 FIDE, so the event is another strong tournament to be held at MCC, although there are a wide range of players, both in terms of rating & age.
Thanks to Philip Drew, the new ACF equipment officer, the event has live DGT coverage of the top 5 boards, so if you are unable to come to the club, you can follow the top games at home or anywhere else online.
Result for the tournament & pairings are being posted on ChessChat, although they will also be available on the MCC website at a later stage.
Round 1 saw results go mostly according to rating, but the players in the top half of the ratings did not make it through the round unscathed. Calvin Bennett beat Colin Cloudsdale, Mukesh Krishnamurthy beat Andrew Footner, Bobby Yu beat Chris Kolak & Dai Cheng held Anthony Hain to a draw. 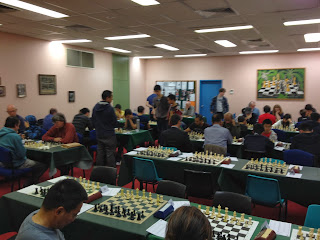 Round 1 underway in the main playing hall 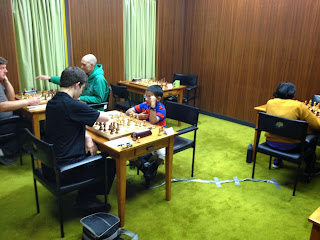 The top boards, all with DGT coverage for this event! 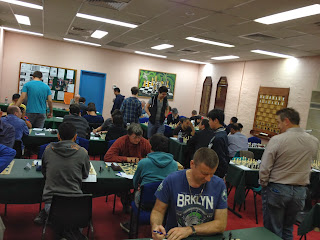 Another view of the main playing hall during round 1