Day 2 of the Australian Chess Championship was a demanding one for all involved. The first of two double-round days on the schedule made for a long day of chess for both players and officials.
I'll save most of the chess-related comments for others, with information such as results & games available on the official website, while a number of others are blogging about the event, including Championship player IM Aleks Wohl, Melbourne chess coach Carl Gorka (who has also kindly offered to help put some of the reserves games into PGN format!) & Canberran chess administrator & player Shaun Press. If anyone else knows of others who are blogging or writing about the event online, please let me know & I'll include a link & a mention in a later update!
Today had a few interesting issues to deal with, from standard arbiting issues, to others that are firsts for myself & others involved. Some of the more mundane issues included a player forfeiting the morning round in the Challengers - they arrived later in the day & claimed to have slept in, so I paired the player in question in round 3 & they went on to win the game. Another issue which is unfortunately common in events is dealing with malfunctioning chess clocks - today the games Levi-Solomon & Gibson-Sheldrick were affected by clock issues, for varying reasons. In the Levi-Solomon game, the clock decided to reset itself around move 15. Thankfully IM Stephen Solomon had been diligently writing down the clock times after each move played, so Peter Tsai & myself were able to adjust a replacement clock accordingly & restart the game with a minimum of fuss. The Gibson-Sheldrick issue was slightly different, with the clock having been set incorrectly (it was one of the DGT XL clocks on the stage, which I know I did not set initially at the start of the round, so I'm passing blame off to someone else in this regard). As with some chess clocks, the DGT XL can be tricky to use correctly when not applying a standard setting. Unfortunately one of the standard settings for the clock is the all moves in 90 minutes + 30 seconds per move increment (as used in the Challengers), but not the time control used in the Championship (40 moves in 90 minutes, followed by all moves in 30 minutes + a 30 second increment from move 1). This means that the clocks need to be set manually, using the 'universal' setting 00. The clock had in fact been set to have 40 moves in 90 minutes, with a 30 second increment in time period 1 (correctly), with 30 minutes added for the remainder of the game in period 2 (almost correct), with the game ending in period 3 with no moves being required (correct). What had been omitted (and which is quite easy to do if not being vigilant) was the 30 second increment for the second time period. Kyle Gibson pointed this out to me after his 44th move, so I was able to reset the clock correctly, as well as adding the missing 2 minutes to Kyle's clock, as well as a missing 1.30 to his opponent's clock. 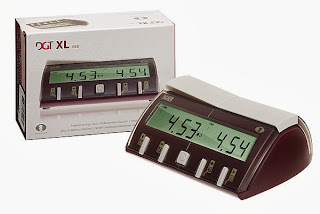 The DGT XL clock, the flagship model of the DGT range, which is able to be connected to DGT boards to allow clock times to be displayed on live internet broadcasts. 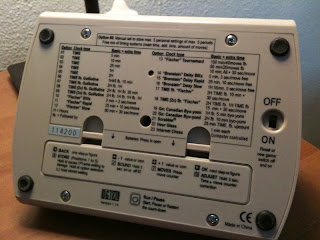 The underside of one of the DGT clocks, showing the variety of settings on offer, including the multi-faceted setting 00 - but use with caution! ﻿

Another relatively mundane issue relates to scoresheets. In addition to sorting out chess-related problems in my capacity as chief arbiter, I'm also inputting the Championship games, so that they can be posted online at the completion of the day's play (largely because there was no-one else to do it at the start of the event & I've had a fair bit of experience doing both jobs recently at MCC). This is usually reasonably straightforward, as most players are able to write both correctly & neatly, or at least neat enough to be successfully deciphered, in most cases. In addition, the DGT boards provide an easy way to get the top boards, as I can simply copy the PGN file that is generated by the software & left in a hidden location on the website. However for the non-DGT boards there are sometimes games where it is impossible, or almost impossible to figure out how a game progressed & I found myself with two such cases in round 2. I've taken photos of the scoresheets in question & have included the board positions (at least as far as I can tell) at the point when things don't quite add up. If anyone has a suitable qualification in cryptography or is somehow otherwise able to decipher the concluding moves to these games, your help would be greatly appreciated (and most often it is the players themselves who are best played to do this, as they have additional advantages over non-participants who are trying to decipher handwriting)! 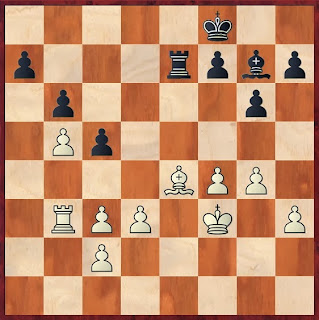 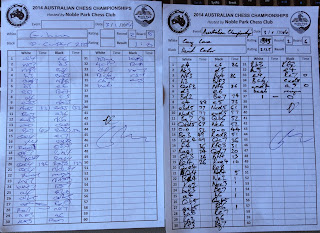 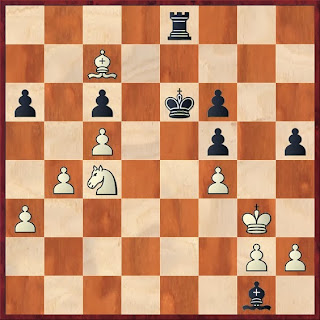 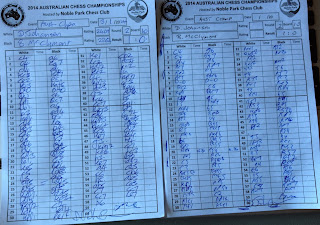 The scoresheets for Johansen-McClymont. Unfortunately for the moves 41-46 it is tough to make out the moves on either scoresheet, let alone whether they are in fact legal moves in the position. A further complication is that Johansen used non-English letters for his pieces, so the usual KQRBN are not there! By around move 47 the scoresheet returns to something vaguely legible, but by that stage it's rather difficult to reconstruct, particularly when trying to get through around 15 of these during the round in between other tasks.

The novelty task for the day involved issues with pigeons above the stage. There was a window above the stage that was left open & during the afternoon, a few pigeons decided to take refuge from the heat outside & sit on the large lighting rig & associated structure which is above the stage. For the most part, this was not an issue, however the occasional flapping of wings or cooing did make for momentary distractions to players in the area, although these were fairly minor & similar to other distractions that one might expect during a playing session (such as footsteps on the wooden floors or stairs leading to the stage, or players dropping pieces on the wooden floor, which have all happened at various stages throughout the event). Where it became a more significant distraction was around the 14 move mark of the round 3 game between IM Igor Bjelobrk & GM Tu Hoang Thong. It seems that one of the pigeons must have objected to a move & decided to drop something on the board at what can only be described as 'g9' ... There was in fact a photo taken of the board at the particular time that I will try to get hold of for a future post, although I did capture a photo of the post-game offerings from above ...
The board, table & seat have all been cleaned & the offending window has now been closed, however it is believed that there may still be at least one pigeon in the ceiling structure overnight - hopefully the boards remain in pristine condition & all that is required in the morning is some doors to be opened & the pigeons to be 'encouraged' to leave ... 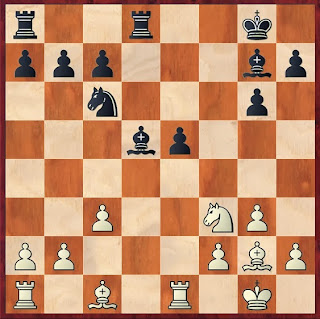 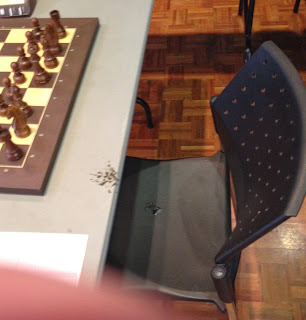 Post-game offerings from above ... thankfully for GM Tu the game had finished by this time.

A photo from the official website taken during Gary Wastell's emotional speech at the opening ceremony. Of note is the various poses & apparent foci of the players seated in front of the stage for the Championships ... while it seems almost everyone else on stage or in the audience is clearly focussed on Gary & his speech!

To conclude this post I again offer three interesting games from the day. The first sees is from the game between Karl Zelesco & IM James Morris, which reaches a highly unusual material balance in the endgame, with Karl having 7 pawns (4 of them passed) against James' rook, knight & 2 pawns! There's quite a bit of discussion about it on ChessChat, so feel free to add your thoughts in the thread there if you have something to add to the current debate. The next sees a queen ending go horribly wrong in the game Brown-Hu with black having TWO queens & one pawn against ONE queen & two pawns, but somehow finding ways to not only lose one of the queens, but also fail to somehow find a perpetual check in the madness that is the queen ending! The final game is the quickest of the tournament so far & sees Svetozar Stojic go astray in the opening, although he could be forgiven for being a little tired, after both his first two round games went for 90+ moves!