On Boxing Day I decided to head to Adelaide for the annual Australian Allegro Championship. This year the tournament was named the Andrew Saint Memorial, as a way to remember Andrew Saint, who had died in tragic circumstances earlier in the year. As a result of the efforts largely of Alex Saint, as well as those of SACA & various sponsors, the event was held at the Stamford Grand Adelaide this year, which is right on the waterfront at Glenelg. 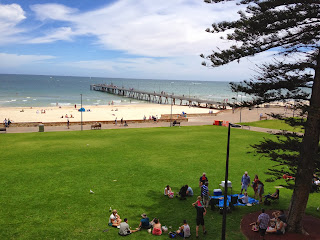 The view from the Balcony of the Stamford Grand

The event attracted a huge field of 128 players, with a number coming from interstate to play. There were also a few players from overseas, GM Vasily Papin & GM Tu Hoang Thong who had both played in the Australasian Masters, as well as WGM Irene Sukandar, with all three staying on in Australia to play in the Australian Championships.

Prior to the tournament proper, while the last few entries were being processed, there was a performance by Diamond Majic, a brother & sister magic act, who kept the waiting crowd entertained for almost 30 minutes! I managed to record a few brief videos of their performance:


Once the proceedings got underway there was plenty of excitement to be had. I managed to create the first big upset of the day with a win over top seed IM Mark Chapman, though it was more due to good fortune than my good play. I completely botched the opening to be a pawn & an exchange down before deciding that I may as well try to be aggressive & see what happened. To my surprise, Mark panicked & proceeded to return the exchange & shortly after the extra pawn. This meant that we entered an ending with a rook, bishop (same colour) & two pawns each, where I was perhaps slightly better due to my king position. After a set of pawns were exchanged, I used my king & rook to create mating threats & managed to pick up Mark's final pawn, while keeping my own. Although the position was still objectively drawn, Mark's defensive task was not easy & he finally lost on time. Although I continued my good start in the next round with a win over Alan Goldsmith (in spite of missing a mate in 1 early in the game - which Alan afterwards claimed threw him off somewhat), it came to a halt with a loss against Anthony Hain. I managed to beat Bill Kerr & then swindle a draw against Kevin Sheldrick before losing to Brodie McClymont in the final round to finish on 4.5/7.
The tournament finished with GM Vasily Papin winning with a picket fence 7/7, with GM Tu Hoang Thong, IM James Morris, WGM Irene Sukandar & James Obst tied for second place on 6/7. Full results can be seen on the tournament website.

The success of the event this year means that I will definitely be considering a trip to Adelaide in my regular post-Christmas plans from now on ...

Here are some photos I took during the tournament: 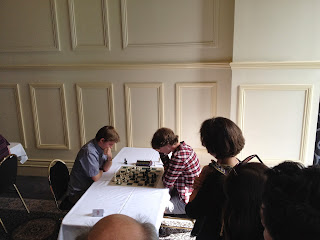 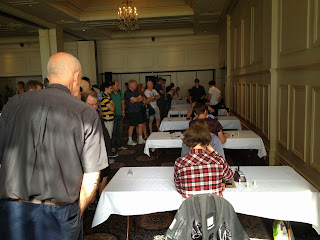 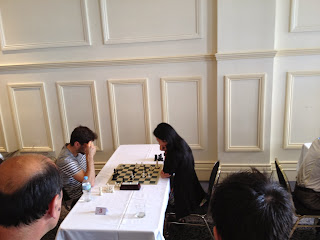 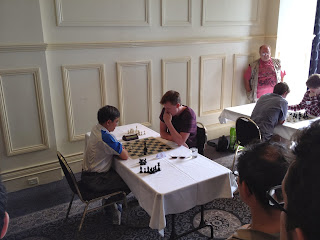 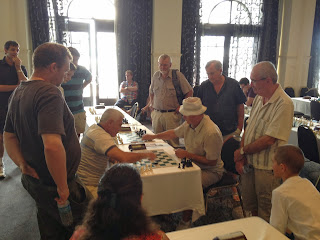 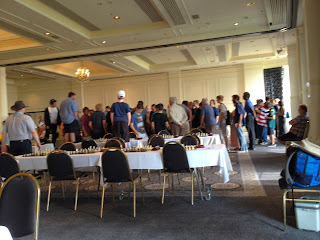 Which attracted quite a crowd! Result ... draw! 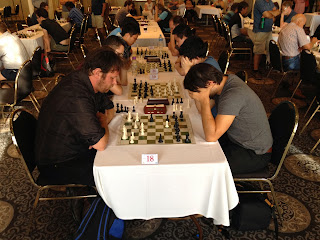 Of course when you travel interstate for a chess tournament, you always get paired with players you play all the time at your local club - here David Beaumont & Paul Cavezza resume their hostilities from MCC Fight Club ... result Beaumont 1-0 Cavezza 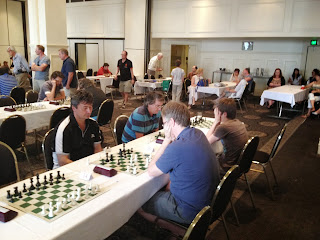 Mato Jelic, famous for his YouTube chess videos, in action at the event 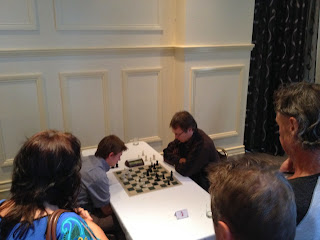 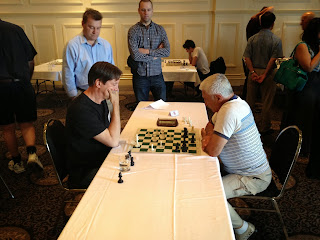