Day 3 of the Australian Chess Championship saw round 4 of the various tournaments being played & somewhat unusually the games in the Championship division were almost all over fairly quickly by chess standards, with only one game going past the four hour mark.
In terms of the chess itself, the leaders are beginning to sort themselves out in the various events. In the Championship there are three players, GM Vasily Papin, IM Bobby Cheng & IM Moulthun Ly, who are tied for first on 3.5/4, with six players on 3/4 just behind them. In the Reserves, Derek Yu is the early leader & is the only player on 4/4 in that event, although there are six players who are just behind him on 3.5/4. In the Challengers two players remain on a perfect score, with Mark Stokes & Calixto Dilag both on 4/4, while three players are close on their heels with 3.5/4. You can of course find all the results from the tournament on the Official Website under the Results & Pairings tab.

As I have said in my previous posts, I'll try to focus on aspects of the tournament other than chess, not only because of my position as an arbiter at the event, but also because others are looking after that side of things, with the blogs mentioned in yesterday's post continuing to discuss (for the most part) the chess at the event. To save scrolling back, most of these are found in the 'Other Interesting Websites & Blogs' sidebar, with DoubleRoo (Aleks Wohl), Coffe House Chess (Carl Gorka) & chessexpress (Shaun Press) being the main blogs of note, although others may appear at some stage.

With that in mind, I decided to grab tournament organiser, FIDE Master Dusan Stojic for a short interview after his round 4 game (apologies for the sound quality, particularly late in the video - the interview was held outside the playing hall & it turned windy in a hurry, as is typical of the Melbourne weather):

The official website has also been 'jazzed up', with the inclusion of a photos & videos page, largely thanks to the camerawork of Mike Loh. Given how important I think it was, below is the first part of the opening ceremony (albeit with Mike often focussing his camera on the crowd), which includes the emotional speech by ACF President Gary Wastell where he talks about the various members of the Australian Chess community who passed away in 2013:


Also thanks to Mike, we now have the 'official' photos of the pigeon incident from round 3: 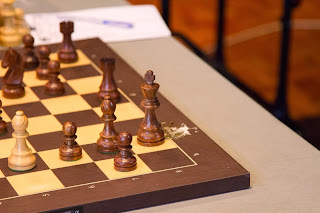 A rather unusual addition to the chessboard ... 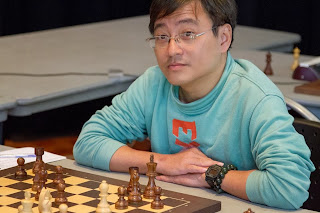 Vietnamese Grandmaster Tu Hoang Thong looking somewhat hesitant about his position after moving his rook out of the firing line of the bishop ... but is it still exposed to attack on f8?
Visiting Russian Grandmaster Vasily Papin has been busy while in Australia, finding time to do some sightseeing in between his various chess tournaments. He has recently published an article online entitled 'From Australia with Love' where Vasily shares many of his photos taken in the early part of his trip to Australia up to the end of the Australasian Masters tournament, where he finished in a tie for first place. Hopefully at some stage there will be a follow-up, with more photos from Vasily about his new year in Australia & the Australian Championships! 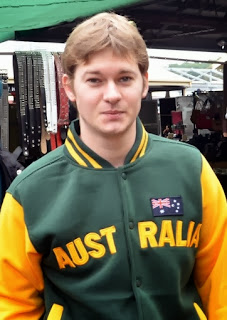 Finally another three games from the Championship to finish. The first could be an ominous warning, with GM Darryl Johansen beating IM James Morris in the 'boa constrictor' style that he has become so well known for over the years - could this be a repeat of Geelong 2012? The next game sees IM Moulthun Ly snatch a pawn in the opening against IM Max Illingworth before finding a way to fend off the subsequent ferocious-looking attack, before finally securing the victory in a rook ending, while the third game sees the attacking ability of IM Andrew Brown on display - happy to sacrifice pawns & temporarily expose his king to attack, just so he can open lines for his own attack! The finish to the game sees a nice temporary sacrifice by Andrew to leave Jason Tang with little choice but to resign.