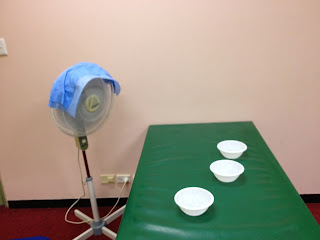 The above photo was the story of the day at MCC ... finding ways to deal with the heat at MCC & I decided to set up a number of fans with ice in front of them around the room. This seemed to at least reduce the temperature in the room by a few degrees, which made the conditions more bearable than they were during the Saturday rounds, although it was still fairly warm inside the tournament room. In related news, MCC have apparently purchased an air conditioner, so this should make conditions at future events at MCC much more acceptable for the players. 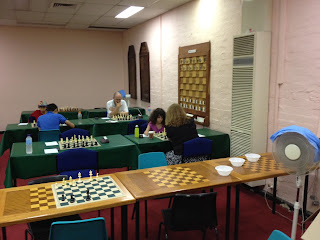 As for the chess, Michael Baron recovered from his early loss & took out the tournament with 6/7 after a grinding win over Patrick Scharrer in round 6﻿ & finding a tactical finish against Jack Puccini in the final round to win the tournament. The minor placings were filled by Patrick Scharrer (whose only loss for the tournament was to eventual winner Baron) & juniors Ari Dale (who finished strongly after some early losses) & Max Chew Lee (who was the only player to go through the tournament undefeated, with three of these against players over 200 points higher rated). Other prizes went to Jack Puccini (who had a fantastic tournament, including an excellent win over Sylvester Urban in round 6, shown below), Finley Dale (who recovered well from a start he would rather forget) & Jimmy Ying (who had a solid tournament).
As usual, results are posted on chesschat.
Yesterday's 'Song of the day', Survival of the Fittest by Mobb Deep, was the entrance music of choice for Rashad Evans for his convincing victory over Phil Davis in UFC on Fox 2 over the weekend. Looks like my taste in music is perhaps a little more 'populist' than I thought!

The next big event at MCC is the biggest of the year - the annual MCC Club Championship - which brings out some of the chess elite in Melbourne (I will again be the arbiter) & hopefully some great chess!
Posted by MelbourneGamesCoach at 21:47