The first day of the MCC Australia Day weekender has come to a close, and although it lacked the drama of PM Julia Gillard's Australia Day, it did provide plenty of interesting fighting chess.
Although round 1 looked rather routine in theory, with all the higher rated players winning, there were some scares along the way. Oscar Pearce should have held Max Chew Lee to a draw, but blundered at the crucial moment, putting his king on the wrong square, which allowed Max to win. If Oscar had played the ending correctly, Max would have had no choice but to go into a bishop & wrong-coloured rook pawn ending, which is known to be theoretically drawn. Jack Hughes pushed Gary Lycett to the limit, with the game lasting almost four hours before Jack finally capitulated.
Round 2 again saw most of the results go according to rating, although many of the higher seeds had to work hard for their point. Ruben Nowak showed good technique to beat Tristan Krstevski in a bishop ending, while Max Chew Lee was unable to finish off Gary Lycett after a tense middlegame struggle. The final three games (boards 1, 2 & 4) all went for more than three hours, before Puccini managed to draw a tough ending against Beaumont, while Palma & Chmiel were beaten in the end by Gorka & Baron respectively.
Round 3 pairings & full results for rounds 1 & 2 can be found on Chesschat. Tomorrow sees just the one game in the evening, but if the first two rounds are anything to go by, there's plenty of drama ahead! 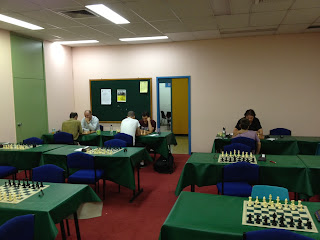 The final games in progress in round 2, in an otherwise deserted tournament hall.
Posted by MelbourneGamesCoach at 00:45