This was supposed to be a post about the silly side of the last two days of the Doeberl Cup, but unfortunately the event has been marred by tragedy, with a car crash involving a number of players from Melbourne Chess Club who were returning from the event, which has tragically killed Andrew Saint & Hannibal Swartz!
According to initial Police reports, the accident occurred near Winton & from what the chess community has heard, the car they were traveling in blew a tyre & rolled.
The incident is made all the more tragic by the fact that hours earlier Andrew had won the Major division of the Doeberl Cup in Canberra in arguably his best tournament result!
I had known Andrew for a number of years through his involvement in the chess scene in Adelaide, but had got to know him better since we had both moved from our home cities to Melbourne. He was always cheerful & smiling, even when stressed & always had kind words for those he spoke to. His chess was generally solid & positional, though he was also more than capable of finding the right tactical solution to a position if necessary!
Hannibal had only begun playing chess in Melbourne in the last year, but had the highlight of drawing with visiting German GM Igor Khenkin in a simul at Box Hill Chess Club in January. He was quiet & unassuming, but had made a number of friends in his brief time in the chess community.
Both will be missed by the chess community.
My thoughts are with their families & friends.

Andrew in late 2012 presenting a cheque to Max Illingworth. 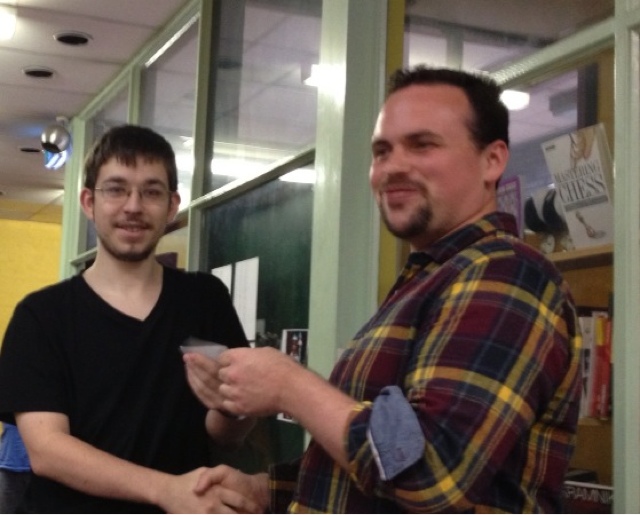