The final day of the ANZAC Day weekender finished as expected at the top, with GM Zong Yuan Zhao completing a picket fence to win the event with 7/7. Malcolm Pyke also finished strongly to place second behind Zhao on 6/7, winning all his games other than his loss to Zhao. Karl Zelesco finished in outright third with 5/7 after winning a tense final round game against Gary Bekker. As is customary in these events, juniors scooped the rating division prizes, with Kris Chan & Nathan Chin winning the under 1800 & under 1600 divisions, while the junior prize was shared between Jack Puccini, Max Chew Lee & canberra's Michael Kethro.
The day was of course not without upsets, with Tristan Krstevski, Marko Grabovac & Finley Dale holding higher rated opponents to draws in round 6. Round 7 saw Marko Grabovac, Nathan Chin, John Toth & James Brennan beat higher rated opponents to finish strongly. 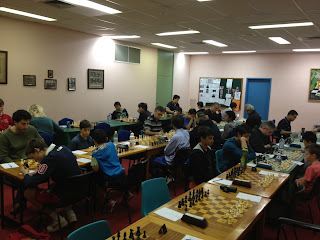 A crowd gathers around the Bekker-Zelesco final round game 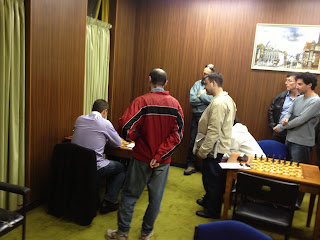 Below is the exciting final round game (the last of the tournament to finish) between Gary Bekker & Karl Zelesco, which ultimately decided third place. In the final position, Bekker lost on time, though by that stage his position was difficult anyway.