Today was the first session of the Northern Star Chess Squad at Eltham High & I had a really great time running the session! Although it was only a small group, it meant that all the kids could be involved & it was great to see that they were all so keen! The group managed to get through quite a bit of material in the 3 hours, as well as playing a game that I will analyse for them during the week.
Here is the demo board with a list of things I intended to get through in the session - didn't quite manage it all, but it was great to have the kids engaged & fascinated with the visualisation exercises! 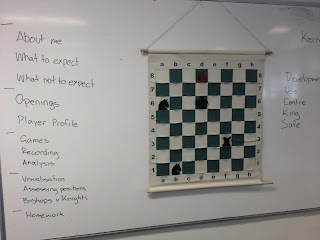 I started the session talking about how I got involved in chess, from my days playing school chess in Sydney, through to Sydney chess clubs, a move to Melbourne & my various teaching & coaching jobs. Although the kids may not have appreciated it, I thought it would be good to let them realise that chess is the sort of thing that you need to spend time on & experience to really improve - I remember when I first started at a chess club (at the Canterbury Chess Club in Sydney) that it took me about two months before I finally won a game at the club ... and another few months after that before I won my second game! After that introduction, we looked at a game by Bobby Cheng - his round 11 game from the 2009 World under 12 - where he needed to win against the top seed to win the tournament. Obviously people who know a bit of Australian chess history know that Bobby went on to win the game, but they may not have seen it & it is in many ways a good example of Bobby's aggressive, attacking style.

After looking at the Bobby Cheng game, the kids played games against each other & once they had finished, we looked at a number of visualisation exercises. The two most interesting of these I have posted below:

In the following position, the black pieces do not move, but they cannot be taken. The aim is to find a way to checkmate black in the shortest number of moves, but your pieces cannot move to a square that is attacked, and you can only play a check that is checkmate (ie: the final move). 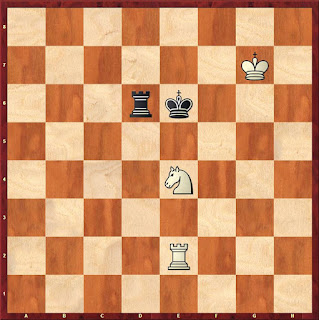 The quickest solution is to play 1.Kg6 followed by 2.Nf6#

The next position has the same aim & constraints. The thing that made this puzzle an excellent learning tool is that all the kids could find a way to checkmate black, but the challenge then became how to do it in the shortest number of moves! 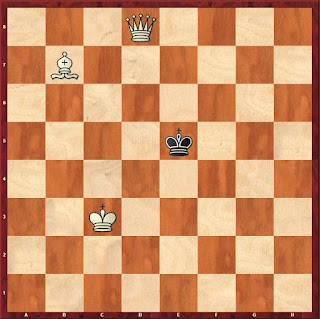 All-in-all I had a great time & hopefully the kids that attended also enjoyed themselves & learnt some more about chess! The aim of the squad after all is about learning, but also about having fun!

If anyone reading this is interested in attending the squad sessions, contact Pearl Yung at Northern Star Chess, or look at the Squad Page for more information.
Posted by MelbourneGamesCoach at 04:22