Day 3 was a single evening round, but it was quite a change from the mild, sunny conditions of the weekend. ANZAC Day eve saw Melbourne turn on a downpour & traffic around Fitzroy was horrible, meaning a number of players (as well as an arbiter) were running a few minutes late, although the games started on time & everyone made it to the venue before the 30 minute forfeit time!
The first game to finish saw a tricky tactic from young Marc Grech. As white in the following position he found Bb5, winning the queen & shortly afterwards the game. 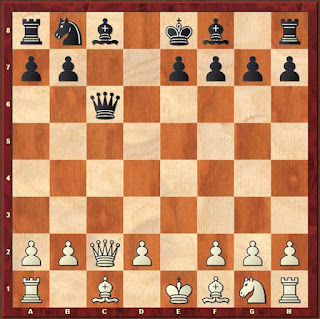 Ari Dale managed to hold a draw against Justin Tan on board one in a trciky ending that saw Justin pushing for the win with a rook & two pawns against Ari's Knight & Bishop. Ultimately Ari managed to exchange both the pawns for his bishop & they agreed a draw in a rook v knight ending. James Morris found a nice combination against Max Chew Lee to remain within striking distance of the lead, while Justin Penrose managed a come-from-behind win against Jack Puccini. Most of the other games went according to rating, although Richard Voon was very lucky to escape with a draw against Will Bakanursky.
Results are as usual posted on ChessChat.
With Justin Tan leading a pack of three by only half a point, the tournament is still very much up for grabs going into the final day!