This year rather than playing the Doeberl Cup, this year I was one of four arbiters for the event (the others being Shaun Press, Charles Zworestine & Lee Forace). This gave me a view of the 'other side' of the tournament ... with the experiences in many cases being very different - I rarely looked at any chess over the course of the weekend. The only time I really looked at anything in any detail was in the two games that lasted past the scheduled start time for the afternoon round - the round 3 clash between GM Horvath & FM Ikeda & the round 7 clash between IM Xie & FM Illingworth. I also decided to take a few photos of the growing crowd in the Xie Illingworth game: 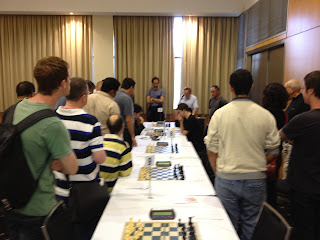 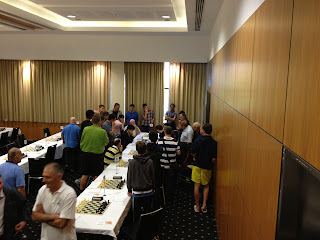 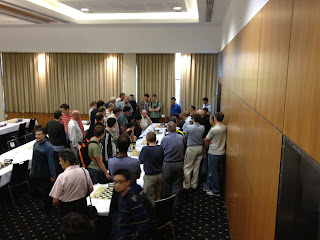 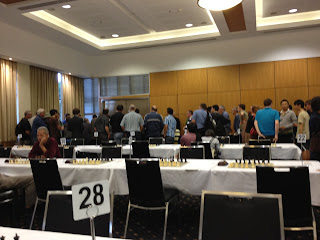 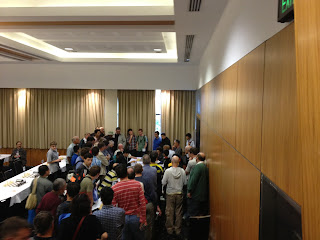 The role of arbiter at a bigger tournament (as opposed to the ones I have mostly been running at MCC of late, with fields from 20-60), also exposed me to a wider range of things to do as an arbiter. Obviously there were the usual arbiter-type things to do, like setting clocks pre-game, readjusting clocks if the clock reset mid-game (something that unfortunately happens far more often than it should with the DGT clocks), making sure players have new scoresheets around move 60, checking triple repetition claims and the like. Of course with the larger tournament, I also experienced a few things that I had not really had to in tournaments previously - dealing with crying kids on more than one occasion in the under 1200 tournament, having two players 'blitzing' & not recording moves in a FIDE rated game with a 30 second increment (I got them new scoresheets & made sure they recorded all subsequent moves on the new scoresheet),cross-checking results on the multiple pairing programs used (Swiss Manager as the main FIDE-approved program, Swiss Perfect for use for ACF ratings & Vega for website publishing), as well as what was described as 'a lot of sitting around doing nothing' when you were essentially keeping an eye on the playing hall while waiting for a problem to occur.
It also highlighted just how draining a day of chess can be, particularly with the late night on Friday & the early start on Saturday, with the last game not finishing until about 12:30 (so not leaving the venue, let alone getting to my hotel & sleeping, until sometime afterwards) & the Saturday round starting at 9:30 (and as arbiters needing to be there early to set clocks & the like before the round started). I can only imagine how GM Horvath felt, as he managed to have two long games on the Friday (delaying the afternoon round in the morning game & being second last to finish at night) before having to back up on Satuday morning. Of course the fact that he managed to win the tournament itself is a testament to both his chess skill as well as his stamina.
In terms of the tournaments itself, there were 250 players overall across the four tournaments (as well as 80 for the Saturday night lightning event), with the titles going to GM Adam Horvath in the Premier, Michael Yu in the Major & Dimitry Lee in the Minor. Full results are available on the official website.
Another new addition at this year's event was the excellent book by Bill Egan on the History of the Doeberl Cup, somewhat imaginatively titled The Doeberl Cup: Fifty Years of Australian Chess History. At present I've read the first few pages & had a flick through the book & it looks very comprehensive as well as being an interesting read! 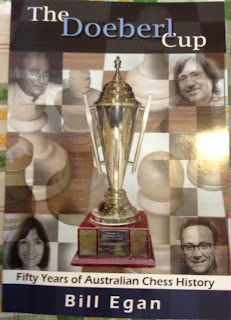