With the AFL season about to start, with Adelaide v Essendon on Friday night, I thought it was about time I posted what at the moment is my starting squad in the AFL Dream Team competition. The real trick to this game is to find those players that will make you money quickly by over-performing from their starting value, combined with having players who will score the highest in each position throughout the year. As the season progresses, you trade in these over-performers for the high scorers, with the aim being that by the end of the season you will have the best possible team. Of course the related trick is to make the right trades at the right time, which is where things get complicated, however the revised rules regarding trades (you now get up to two trades every week of the season, rather than having a limit on the total number of trades made during the season) should make trading even more important. Add to that the revised team structure, with one less defender & forward, but two extra midfielders, and there should be some very high scores posted, so one would need to be on the pace early to be in contention for the overall prize at the end of the season.
With that as a way of introduction, here is my current AFL Dream Team 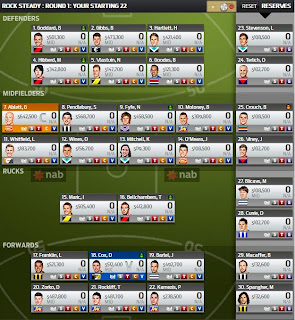 You can also join my league & play against me throughout the season. The code to register is 795381.