Day 2 started with some minor technical difficulties, with a Spanish Festival leaving many streets near the Chess Club closed or blocked off, as well as making parking anywhere near the club almost impossible! Perhaps this had an affect on overnight leader James Morris, as he lost his first round of the day to Jesse Jager. This allowed Simon Rutherford (who beat Ari Dale) to take the outright lead by a clear point! In other results, Palma, Yu & Krstevski all recorded upset wins, while Finley Dale held Deniz Tuncer to a draw. Round 9 saw Rutherford turn back the challenge of Jager to solidify his one-point lead over Morris, while Lawless scored the only major upset of the round by defeating Ilic. Rutherford continued his winning ways in round 10, defeating top seed Michael Baron, while Ari Dale, Anthony Harris, Bobby Yu & Vishal Bhat all held their higher-rated opponents to draws, while the mother-son battle between Tristan Krstevski & Tanya Krstevska ended in a hard-fought draw.
Round 11 saw the gap between Rutherford, Morris & the field widen, while Voon made a late charge with a win over Beaumont. Krstevski & Archie Beaumont also held their higher-rated opponents to draws. Before round 12 began, James Morris was heard to lament 'Oh dear, Voon is my only hope now!', referring to the upcoming top board clash between Simon Rutherford & Richard Voon! However, Morris need not have worried, as Voon scored the upset win of the tournament, defeating Rutherford, which allowed Morris to join him in a share of first place after defeating Addamo. Urban scored a controversial upset win over Baron, after a frantic time scramble with knight against knight & pawn, to take third place, while most other results went according to seeding.
The final round saw both Rutherford & Morris win their games, to both finish on the impressive score of 11.5/13, and split first prize between themselves! Ari Dale defeated Sylvester Urban to snatch third place, while Jager & Baron both won their final round games to share 5th place. Thai Ly finished with a draw against David Garner, to take out first in rating group A with 7.5/13, while Frank Lekkas, Deniz Tuncer & Tony Tosevski all finished on 7/13 to share 2nd place in the rating group. Giant-killer Richard Voon took out rating group B with 7.5/13, while second place was shared between Finley Dale, Anthony Harris & Tanya Kolac, who all scored 6.5/13. Vishal Bhat scored some good results towards the end of the tournament to finish on 6/13, which was enough to take out rating group C, while second in the group was shared by Tristan Krstevski & Bobby Yu on 5.5/13.

Final Crosstables & a list of all the Prizewinners can be seen at ChessChat.

The final round underway: 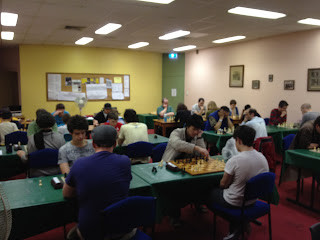 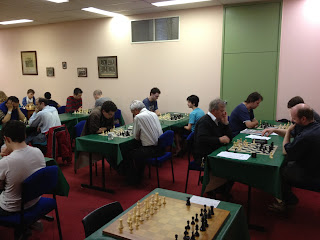 Round 9 action ... or should that be inaction:
The finish of the round 11 clash between MCC regulars Voon & Beaumont:

Presentation to the winners James Morris & Simon Rutherford, followed by a short speech from Simon: