This weekend I was the arbiter for the second Noble Park Classic, played at the Noble Park Chess Club. This year there were 45 entrants, with 2 IMs (James Morris & Ari Dale), 2 FMs (club regulars Dusan Stojic & Domagoj Dragicevic) & the top 10 players all rated over 2000 ACF, making for another strong weekend tournament in Victoria.
DGT coverage was provided on the new website for the upcoming Australian Championships, to be hosted by the Noble Park Chess Club in January 2014 at the Springvale Town Hall, with newly appointed ACF Equipment Officer Phillip Drew in charge of the technical details over the weekend.
With seven rounds over the weekend at the 'fast' time control of 60 minutes + 10 seconds per move, there were bound to be some upsets & these began right from the first round! 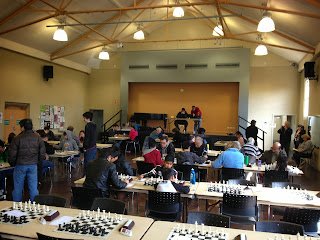 Round 1 underway at the Noble Park Chess Classic

Round 1 saw Cassandra Lim beat Surjeet Singh (rated over 800 points higher than Cassandra) after winning a piece early in the game. It looked as though Cassandra may have missed a chance to win when she recaptured a pawn, rather than advancing her king, which threatened both a rook & checkmate, both of which could not be stopped, before finally finding herself in a rook & bishop v rook endgame. Although Surjeet's king was in a poor position, he probably should have been able to hold the draw with best play, but made an inaccurate rook move, which allowed a checkmating combination, which Cassandra found to take the win. Pearl Yung managed a draw against Tom Lea (also over 800 points higher rated than Pearl) when she allowed a repetition of moves in a better position.
On board 1, James Morris played a nice sacrificial attack to defeat Franz Oswald

Round 3 saw James Morris move into the sole lead with a victory over John Nemeth in a topsy-turvy game, while the other players on 2/2 all drew their games. Kai Jie Soo beat Dimitry Partsi, Alanna Chew Lee beat Finley Dale & Cassandra Lim beat Tanya Kolak in the upsets of the round, while Zachary Loh, Svetosar Stojic, Milenko Lojanica, Carl Dingfelder & Christopher Lim all held their higher rated opponents to draws.

Round 4 saw Ari Dale beat James Morris on board 1 when his rook, knight & pawn proved to be too strong for James' queen, while Dusan Stojic & Zachary Loh also won their games to join Ari in a share of the lead on 3.5/4. The upsets continued in this round, starting with Kai Jie Soo, who beat John Nemeth after John mixed up his move order in a sharp Sicilian position. Savithri Narenthran beat Miodrag Milojevic, Lillian Lu beat Franz Oswald & in the final game to finish, Max Chew Lee found the only way to lose his position against Khadem Jahid, who found a way to break through the apparent fortress setup in a rook & pawn v bishop & pawn ending.

Round 6 saw two exciting games on the top two boards, with Ari Dale beating Dusan Stojic which exploded in tactics as both players entered time trouble, while on board 2, Zachary Loh beat James Morris when James discovered that his extra pawn did not make up for his lack of development & at one point he was almost in zugzwang in the middlegame! Zachary finished off the game in fine style to remain within striking distance of Ari. Tom Lea slowed Kai Jie Soo's momentum after getting the better of a tactical slugfest. Upsets this round were recorded by Surjeet Singh over Miodrag Milojevic, William Maligin over Khadem Jahid & Zhi Xin Guo over Tanya Kolak, while Jack Puccini, Carl Dingfelder, Kayson Wang & Carl Loucas all held their higher rated opponents to draws. 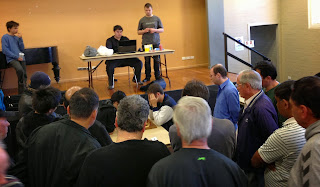 A crowd gathers to watch the exciting conclusion to the Dale-Stojic clash!

The final round saw more drama, with Domagoj Dragicevic trying almost everything to beat Ari Dale, only to find himself left with no alternative but to take a draw, which ensured Ari won the tournament after Jack Puccini had beaten Zachary Loh on board 2 to overtake him for a share of second place. On board 3, Tom Lea had much the better of his game against Dimitry Partsi, but could not find a way to break through Dimitry's defences, repeated the position & offered a draw. Unfazed, Dimitry declined the draw & tried to generate mating threats, which Tom stopped, only to discover that Tom had overstepped the time limit in an attempt to prevent Dimitry's threats! This allowed Dimitry to rocket up the standings into a tie for second place. Kai Jie Soo finished off the tournament with another upset win over Milenko Lojanica after Milenko's opening choice (1.g4 - the Grob) backfired, which allowed Kai Jie to share the rating group 1 prize with Tom Lea. Other final round upsets saw Carl Loucas beat Khadem Jahid, Cassandra Lim beat Geoff Lee, Milan Stojic beat Milic Sucevic & Christopher Lim beat Gunnar Froiland, which helped all of the winners to a share of the rating group prizes.