More sad news for Australian chess, with FIDE Master & former Australian Champion, Australian Open Champion & Australian Junior Champion Max Fuller passing away last week. According to people in Sydney, he unfortunately suffered a stroke on the day of Peter Parr's funeral & was admitted to hospital, where he later had another stroke & passed away.
As with Peter, I really only got to know Max when he was already a well-known figure in the chess community, though it was primarily through my visits to Peter's shop on Thursday nights that I met & got to know Max a little. When he was there, he was always happy to join in conversations about chess, whether it be current events, or some historical event or topic, as well as occasionally join in the blitz sessions when he felt like a game (and of course the group was most accommodating when Max wanted to join in the blitz - he was often able to 'jump the queue' to be next in line to challenge the previous winner).
Max always seemed like a well spoken person & was Australia's first real chess professional, travelling overseas in the late 1960s & early 1970s when he was one of the best players in the country (if not the best), playing in events such as the British Championship (where he twice finished in second place). One other special aspect of Max's chess is that he took a substantial amount of time off chess in the late 1980s & most (if not all) of the 1990s, only to return to chess in the early 2000s & finish in a tie for first for the 2005 NSW Championship (although he did lose a playoff to Andrew Bird). Another tremendous loss for the Australian chess community in a year that may be best remembered for those who sadly passed away. 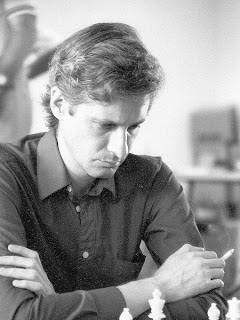 Max at a tournament in 1984, complete with lit cigarette (how times have changed). Photo by William Anderson Smith

I suppose in some ways Max was in part responsible for my more recent transition away from wild tactical positions & towards more positional considerations, as the occasional blitz games we played at Peter Parr's shop usually ended with me being on the wrong side of a positional grind, with the occasional tactical oversight from Max allowing me to win the occasional game or two. It was only when I decided to show one of Max's games to some of my chess students that I started to realise how important he was to the history of Australian chess, as well as being an influence on my own chess career.
The game in question was the following game against V Solanki from the 1987 Australian Open, which I sourced from Michael Salter's book How Good is Your Chess? (which in turn is a compilation of various articles he had written for the NSWJCL magazine, using a format similar to the one initially employed by Leonard Barden & later used by others such as Danny King). It is a great example of how to achieve an advantage from a relatively quiet looking position, without giving your opponent any chance of counterplay!